I wasn’t originally going to give this new Bones sci-fi/mecha series a look, but then I realized I was only watching three shows to my colleagues’ four; something I’d never live down. Having recently come off of the excellent but highly un-serious Space Dandy, your classic straitlaced sci-fi procedural proved highly satisfying, especially considering how much care (and cash) went into its production.

The episode is replete with all the little design details I love, from the intricate control panels and big bold labels painted on everything, to the minimalist black-and-white bumper style informed by Eva and E-7. The central protagonist Manatsu Daichi bears a rather unfortunate resemblance to Renton, but at least he’s not nearly as annoying out of the gate. In fact, I had no trouble identifying with Daichi’s wanderlust and desire to do great(er) things.

Flashbacks are interspersed between the escalating present events, efficiently painting the picture of Daichi’s past, the legacy of his dad, and astronaut “Captain”, and the two friends he met while exploring the launch site on the island where he grew up, both of whom carry a very whimsical lab experiment bearing. We also get a slight glimpse of a “Radical Ed” like hackress. All it takes is a news report of a strange phenomenon for him to return home and check things out.

And down the rabbit hole he goes, into the cockpit of an “Earth Engine” within a rocket that launches into space and passes through three space stations that assemble a formidable, very chunky-looking mecha somewhat like Tieria’s Gundam Nadleeh. His first opponent will be (the battle doesn’t start this episode) the sexy alien Moco from “Kiltgang” (spelled “Kill-T-Gang” on displays), an organization sending AEOs (“Approaching Earth Objects”) at…Earth (duh).

Sure, long strings of dialogue discussing a whole bunch of terminology I don’t yet understand got a little tiresome, but I enjoyed the technobabble checklists the NASA-equivalent technitions run through as Daichi’s mecha is built. The promo art spoils the fact that Daichi will reunite with the two other kids he befriended, as well as the Ed-like girl, giving us a nice central quartet to work with. I’ve watched a lot in this genre, so we’ll see if Captain Earth can bring something new the table.

What’s red but not read, and dead but not dead? The Red Sea and the Dead Sea. Azuma’s role as Haru’s protector is accepted by the gamemakers and the mission begins in earnest, with the first advance warning being given by Takechi Otoya. Needless to say, her assassination attempt fails, so she drops out of Class Black by the end of the episode. That leaves ten assassins and ten episodes remaining. 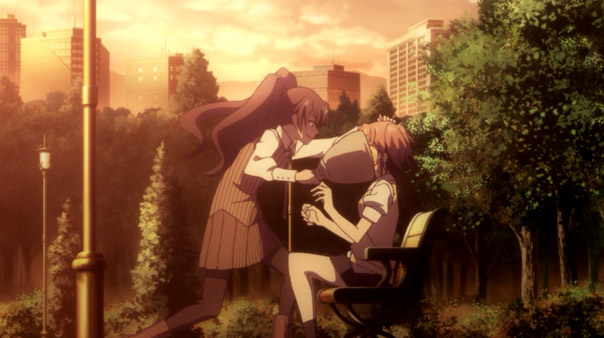 Takechi starts her morning smashing her roommate’s glasses, and it’s gradually revealed she only gets sexual release from murder and is thus a serial killer. If she succeeds in offing Haru, she’s asked for bulletproof insurance that she’ll be able to murder as much as she likes in the future without consequence. She kills her prey slowly, taking after spiders but substituting scissors for fangs. Her buddy-buddy routine with Haru before striking is pleasantly unsettling, but she isn’t convincing anyone.

What’s really interesting about this first attempt isn’t that Takechi failed to kill Haru, but that Azuma failed to protect Haru. Receiving her first warning unsettles Haru, but it also steels her resolve to protect herself, which is what she does, with a little luck: when Takechi lowers her guard, Haru kicks the hell out of her, sending her signature scissors flying right into Haru’s binds, cutting them. Azuma has her chance to take Takechi out, but her gun’s knocked out of her hands and she ends up on her back with a saw blade mere millimeters from her eye when Haru rescues her with a nifty sleeper hold. 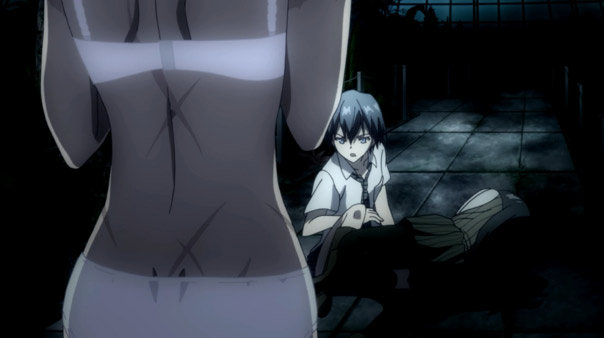 In this regard, Takechi gets a pretty raw deal, as she’s expelled for failing, but Azuma isn’t. One thing’s for sure, both of them agreatly underestimated Haru’s propensity for survival. I imagine we’ll learn a little more about that propensity with each successive assassin. It may well be that Azuma is the one who’ll continue to need protecting from increasingly sinister adversaries. Bring on Number Two.

Not surprisingly, the episode after Hikari returns is an episode all about change. Tsumugu tells Chisaki Hikari “hasn’t changed at all” in five years, but that’s not entirely true: even if he didn’t age, the shock of waking up five years into the future defintiely changes him. He puts up a brave front at first, but the sheer weight of it all overwhelms him. All the change, and not knowing what has become of Manaka, Kaname, and his Dad, has left him lost.

When Hikari finally breaks down to Tsumugu, Miuna is also listening in, and realizes that she was so happy he was back, she never stopped to grasp the sheer burden of lost time weighing on him. I’m loving how Miuna is now being treated like a main character, and five years have clearly turned what had been puppy love into a more serious longing. Yet as small as her chances with Hikari (who is technically her step-uncle), I can’t help but root for her.

But here’s the thing: one doesn’t have to choose sides or pick winners and losers among all the romantic scenarios in play (or on hold due to hibernation); in fact it’s probably best not to dwell on who’s going to end up with whom. The show has never been interested in people pairing off and living happily ever after. The drama in all the yearning and waiting and wrestling with emotions, the journey that matters here, and it’s a rough, unyielding sea. One that Akari and Itaru have already crossed, and now dwell in calm, stable waters. 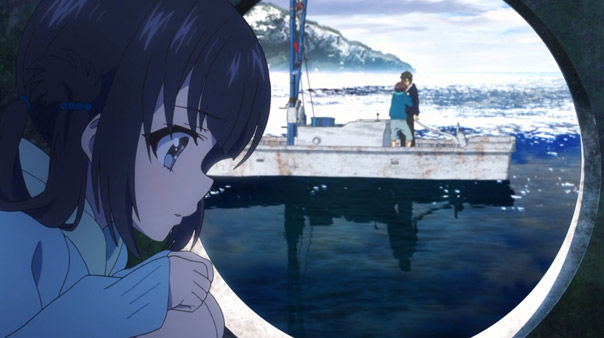 In addition to having to deal with the new world where everyone he knows is five years old, Hikari also has to live in a world without his love Manaka, much like Chisaki had to live without him. Chisaki hesitates seeing Hikari because she doesn’t want him to see how much she’s changed, while Hikari is afraid of the same thing. When they do finally meet, it’s by chance; brought together a loudspeaker playing a song for Shioshishio.

The sight of each other puts them both at ease; Chisaki may be older (and prettier, as Tsumugu boldly remarked earlier), but the fact she apologized to him for changing was enough for him to realize she’s the same old Chisaki in there. And that’s precisely the problem for poor Tsumugu: his feelings for Chisaki may have grown in the last five years, but her feelings for Hikari never changed. Like Miuna, being the same age and living in the same house isn’t enough.

This makes two straight fantastic episodes for Nagi’s second season; right now it’s the best thing I’m watching. That shouldn’t be interpreted as a knock against the Spring season, but as an affirmation of the immense quality these last two episodes have delivered. The show has really stepped up its game with its sublime visuals and an atmosphere so absorbing the twenty-odd minutes of the episode felt much larger in scope. And lest I forget, it also packed in a few genuinely funny comedic moments.