Rentarou reveals his Vanadium arm, leg, and eye, uses them to defeat Kagetane and Kohina once and for all, then obliterates the legendary, Sin-like Stage Five Gastrea that suddenly emerges near Tokyo with a railgun capable of firing projectiles at near-light speed—the projectile in question being his own Vanadium arm, since there’s nothing else.

As flashy and intense as all that action sounds (and looked), none of it would have been of any consequence had I not been emotionally invested. Because Black Bullet did the necessary legwork in the previous three episodes, I cared about all the stuff that went down, the people it involved, and the life-defining challenge that faces Rentarou in the aftermath.

In previous reviews I spoke about how Rentarou and Enju are the people they are today because of each other, and neither can function without the other. That was demonstrated when the remote firing protocols for the railgun failed, putting Rentarou in the hot seat, charged with shooting a ridiculously powerful gun at a target fifty kilometers away. He wouldn’t have been able to do it had Enju not been there to calm him down and offer him her support and optimism. Without their bond, Tokyo would have been toast. 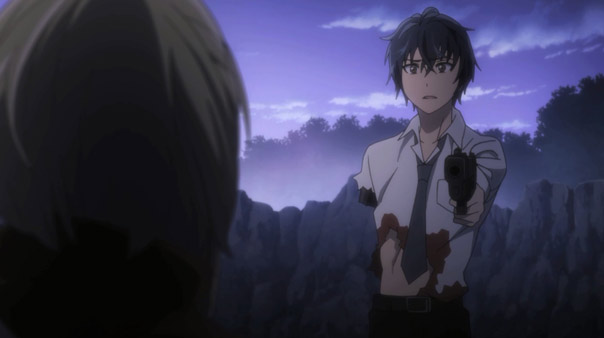 The sudden loss of Senju Kayo really got to me, especially with the manner in which it happened, with Rentarou being forced to kill her before she turned into a Gastrea. Her story was hastily told last week, but it was enough to make an impact. All cursed children are just a few percentage points away from becoming the demons Kisara’s dad believes them to be, and she was an example of someone who had just crossed the 50% threshold.

Turns out Kisara’s dad may have been the one to summon the Stage Five, so he could blame Kagetane and his cursed child daughter (who’s still alive but distraught), and continue and intensify anti-cursed sentiment. But Rentarou is now on dual crusades: to rise to the ranks of civil officers so he can gain the proper clearance to learn about what’s going on and what he really is, but also to save the cursed children, Enju in particular, who is far closer to turning than he lets on to her.