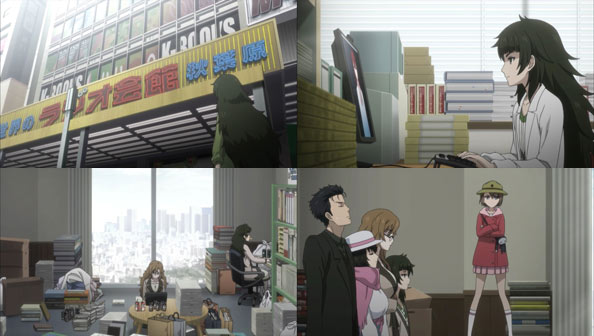 Amadeus is a fantastic movie with a good old-fashioned fatal flaw in its co-protagonist: caring too much. Salieri could hear God through Mozart’s music but not in his own, and it drove the guy mad, especially since he worked and prayed so hard, while everything seemed to come all to easily and naturally to Mozart (or at least it seemed that way to him).

I like how Steins;Gate 0 references that film, and the historical figures behind it, as a kind of loose parallel for Kurisu and Hiyajou Maho. Maho doesn’t claim to have anywhere near the obsession Salieri had, but can’t deny she’s always measured her life and accomplishments against her departed kohai.

She’s also a grinder, which explains how terrible a mess she makes at Feyris’ place (though she has a bodyguard in Kiryu contributing to the mess). When Mayushii is invited over, she brings “Sergeant Clean” Nae with her along with Daru to whip the place into shape. 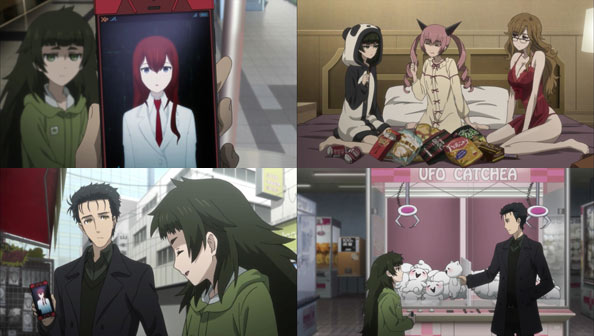 Maho is asked to leave the apartment so they can clean more efficiency, and that’s when she’s able to present the newly-rebooted Amakurisu to Rintarou, who for his part is ready to “move forward” and regard her as a distinct AI and not Kurisu Reborn.

After that, Feyris hosts a sleepover with Maho and Kiryuu, and Maho learns Kiryuu is writing a novel, and also believes she’s “not special in any way” and imminently replaceable. Maho tells her none of that is true; that she shouldn’t belittle herself so easily; or compare herself to others and go through life feeling inferior and…oops, that’s exactly what she’s done with Kurisu. She backs off.

That night, Maho seems to resolve herself to moving forward, just as Rintarou said he wanted to do. They go on a date by any other name to Akiba, where she geeks out both on obscure computer parts (the district’s original function) and racing games (part of its newer identity). Rintarou even wins her an @channel plushie. 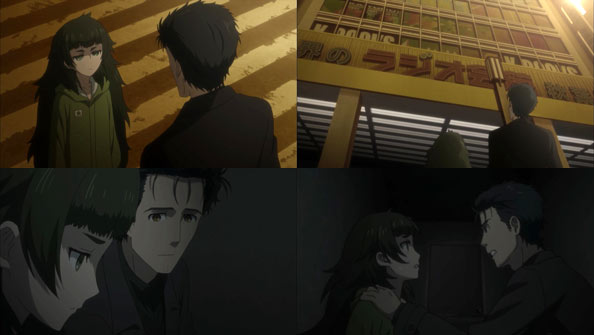 The fun day takes a turn for the solemn when Maho says it’s her intention to visit the Radio Building where Kurisu died, perhaps to find some kind of closure. Rintarou accompanies her, and when Maho laments that humans can move around the axes of space, they’re prisoners of time. If only we could move through time’s axes as well, she wonders, but Rintarou, speaking from experience, tells her they still wouldn’t be able to change anything.

Maho is no dummy, and can tell there are a lot of things about Rintarou and his relationship with Kurisu he’s not telling her. Even so, she can sense he’s somehow working to protect her (and Mayushii) and seeing him struggling alone makes her want to support him in some way. To that end, she informs him she has “Kurisu’s legacy”—her notebook, likely containing all of her time machine research. She doesn’t know the login password, so she hasn’t been able to access it yet, but has reached out to a “trusted” party to analyze it.

This news makes Rintarou turn white as a sheet and adopt his “extremely freaked out” face. He calls that notebook a Pandora’s Box that should never be opened, and could well lead to World War III. Considering her lab was ransacked and she was present for an attack by people they still haven’t identified, Rintarou’s words don’t seem to sound like the ravings of a madman to Maho. They shouldn’t—he knows what he’s talking about.