Itami’s awkward situation is resolved when a “rude” cell phone interrupts Rory’s advances. Moments later, the three special forces teams converge, and Rory takes them all out as they take out one another. So in effect, Rory ends up getting off; only as a demigod, and not as a human.

The group then goes back on the run, commandeering a van and booking it for Ginza, where the visitors are to pay a visit to the memorial honoring the victims of the special region’s initial invasion attempt. Kuribayashi way way way overreacts to her CO’s ignorance of the situation by pulling a goddamn gun on him (one would think such actions usually warrant court martial).

His ex-wife uses the web to make sure there will be a big enough crowd of fans waiting for them in Ginza to dissuade the bad guys from making any further attempts to kidnap the visitors. She also shows she knows Itami to a T when she accurately describes just how each of the three visitors appeals to him, whether it’s Tuka’s looks, Rory’s personality, or Lelei’s vulnerability.

The less said about the U.S. president speaking directly to a covert field agent—without any organizational distance or attempt to achieve plausible deniability—the better. Sorry, but a sitting president is more likely to be jizzed on by a salmon than be this idiotically close to this sensitive and covert an operation.

“Agent Graham” is introduced as one of the only survivors of Rory’s massacre (why she spared anyone is also beyond me), and he still tries to salvage the situation by attempting to pluck one or more of the visitors from the streets of Ginza, where the throngs of fans have amassed and been parted like the waves of the Red Sea by Rory, resplendent in her gothic lolita garb. 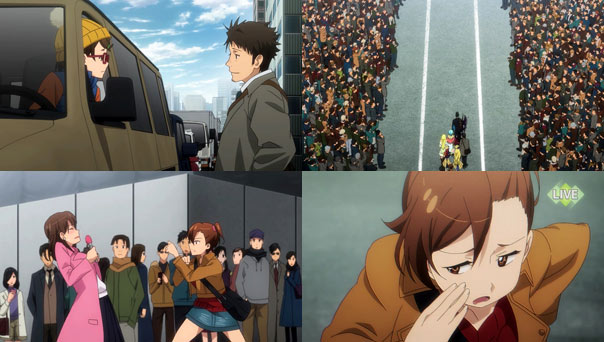 Itami, Kuribayashi, and Tomita escort the visitors to the memorial, with all eyes and cameras on them, foiling any designs Graham may have had. Kuribayashi also bumps into her sister, a rookie news reporter, and report everything they’ve been through and everyone who has been chasing them on live TV. Within minutes, all of the CIA agents in Japan are arrested—which almost makes up for her pointing a gun at Itami earlier.

After praying at the memorial, the group goes back through the gate and returns to the Special Region base. Itami is exhausted, wishing he’d been able to go on an actual vacation, while the three girls all look back on their visit with fondness, whether due to the dazzling technology (Lelei), the shopping (Tuka), or the opportunity to kill lots of people (Rory).

Pina, on the other hand, took something else away from her visit to Japan: they are an enemy her empire will never be able to defeat, and if her empire fights a war, they will not only lose, but be utterly destroyed. She vows to head back to the capital to put an end to the war once and for all. Something tells me she’s going to run into some opposition…probably from some old men.