As ‘Lil Gel-san chills at Gatcha HQ with Sugayama, the reunited Gatchamen do battle with the Kuu-sama…to no avail. While easy to defeat, the damn things keep coming, which makes sense, as they’re the granular embodiment of the collective atmosphere. Hajime stops fighting and determines they’ll need to try different tactics to get rid of it. But first, she and several other Gatchamen go on the Milione Show to receive the public’s blessing via smartphone vote. (OD also gets to meet his knockoff, DD). 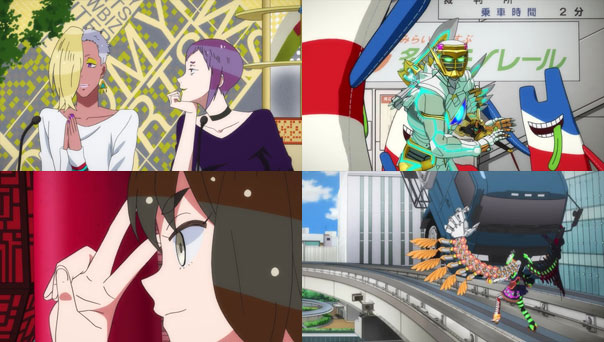 As soon as the public votes 84% to leave things to the Gatchamen, the Kuu-sama immediately cease their attacks and aggressive, and switch to fawning admiration for the Gatchamen. Such is the shifted mood of the people. But they’re still hanging around, to which Berg-Katze and Suzuki independently agree the only answer is to kill Gelsadra. So the Gatchamen deploy and start fighting him head-on.

As we saw in his battle against Joe, Gel is one tough customer, but against the concerted forces of the Gatchamen he is eventually worn down. Only they’re not interested merely in wearing him down. In fact, the G-men make it a point to pummel Gel-san as mercilessly as possible, all while the public watches on streaming media. The Kuu-sama celebrate Gel-san’s imminent defeat, but then…the atmosphere starts to change again. 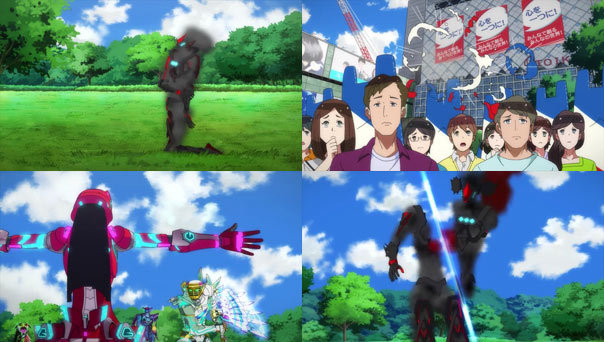 People start to pity Gel-san’s treatment, and believe the G-men might be going a bit too far in taking him out. These peoples’ Kuu-samas pop like balloons one by one. Tsubasa tries to stop Sugane from a coup-de-grace, but after all the other assembled G-men salute, he fires off his attack anyway, which teleports through Tsubasa and slices Gel-san in half. Curiously absent in all of this is Hajime. 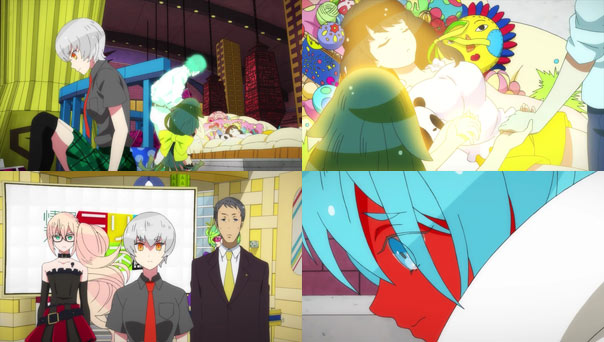 The reason for her absence becomes clear a short time later, once the atmosphere has calmed and peace returned to the nation: she wasn’t absent. Utsutsu borrows the life force of her fellow G-men to heal a Sleeping Beauty-esque Hajime, while Tsubasa goes on the air to apologize to the people for deceiving them: Gel-san isn’t dead. They managed to get around the fact that only killing him could calm the atmosphere by “killing” a fake Gel-san, who Hajime posed as for the purposes of the operation.

Hajime understood that the atmosphere everyone had a hand in creating was far tougher opponent than Gel-san or the Kuu-sama, and defeating it would require more than brawn. They needed to convince the people that they were delivering swift and terrible justice to their fallen alien prime minister, and only when he was in smoldering pieces did they start to find such justice distasteful and prefer to move on to other things. I for one just hope Hajime didn’t have to pay for this victory with her own life. 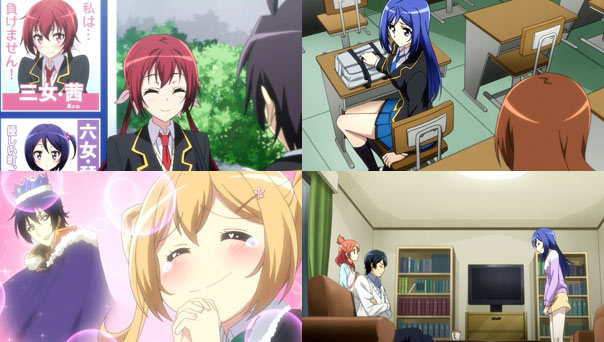 Election day is finally upon us, and the Sakurada siblings are all scraping together their final speeches before the votes are tallied. The leader of Akane’s fan club notices she’s changed in the last eleven episodes, but while she’s not as shy or prone to flash people, he remains as strong a fan as ever. Hana’s friends are thinking of voting for her boyfriend Shuu, though they worry they’ll see less of her if he wins.

Aoi, the expected victor in the election, informs her parents she’s backing out, and neither of them are disappointed. The whole reason they had so many kids—and have an election to begin with—is so they can all choose their own paths in life, which may not include ruling the country. 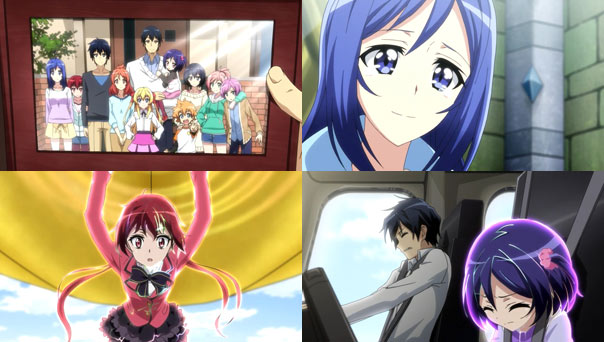 On election day, with the gathered masses in attendance, Aoi announces she’s withdrawing her candidacy and explains why (Absolute Obedience will give her more power than she wants or should have). Her siblings’ speeches are interrupted by a runaway airship headed straight for the castle and the crowd below, but thanks to quick thinking and teleporting by Shuu, Shiori’s ability to talk to the airship, and Akane’s ability to manipulate gravity, the siblings end up preventing a calamity of Hindenburg-like proportions. 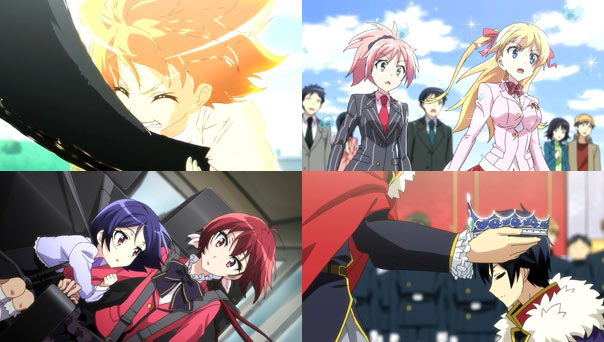 In fact, it’s another all-sibling effort, with Haruka determining the proper landing spot for the airship, Kanade creating a barricade, and Teru pulling the ship to a stop, while Misaki, Hikari, and Aoi keep the crowd calm and safe. But it’s Shuu, who is able to give a speech as this is all going on, who ends up winning the election and becoming king, by taking the lead in averting disaster and promising both to Hana, and everyone else present that he will strive to protect everyone and help them to thrive and live happy, fulfilling lives.

With Shuu crowned, Aoi is off to college, Kanade studies for medical school, Misaki becomes class president, Hikari reveals her identity but remains an idol, Shiori and Teru continue their studies, and Akane pretty much continues on as she has, only now that she’s been through the rigors of an election she’s come out with a thicker skin and more confidence. And she still has time to stop and admire the dandelions. 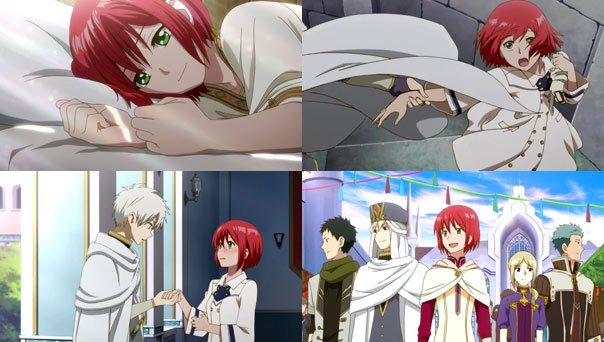 Snow White with the Red Hair’s coda is titled “Goodbye to the Beginning”, and as expected, after the romantic fireworks of last week, Shirayuki and Zen merely settle into the new normal of being a couple. They don’t get married or live happily ever after, mind you; they simply enjoy the time they have alone together as much as they can, and still manage to have fun with other people around.

And because it’s “Open Castle Day” in Wistal, there are a lot of people around.

That being the case, Shirayuki and Zen don’t flaunt their love around to the masses. Only a select few close to them know (Mitsuhide, Kiki, and Obi), and rather than make this their big coming-out party, the couple more or less lays low. Shirayuki even makes sure her hair is covered in public, lest she attract too much attention. As Zen says, there are still a lot of idiots out there.

Even so, Shirayuki gets “captured” one last time: this time by a theater troupe whose leading lady has broken her foot and can’t take the stage. Shirayuki is swept into the role of understudy, and ironically has to dress up as a princess before the prince; perhaps a preview to the not-too-distant future when Zen makes an honest woman out of her.

Yet we also have one last sneering villain in the troupe leader, who wishes to expose Shirayuki’s red hair in order to increase buzz. Zen is having none of it, and crashes the stage as a masked knight to protect Shirayuki’s hair, as well as keep the stage prince from kissing her hand. That’s his hand to kiss! 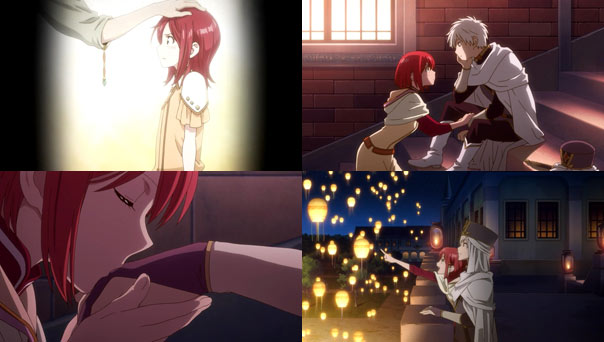 After that excitement, Shirayuki and Zen get a little more time together, and Shirayuki gets to tell him a bit about how her grandparents raised her to be strong and independent, yet she still wants to rely on Zen, as he relies on her. In a neat little role-reversal, it’s Shirayuki who kisses Zen’s hand as a gesture of commitment to sharing her future with him.

Then they go out to watch hundreds of lanterns get launched; a striking final image for a show that was equally striking in its unblinking earnestness and warmth in portraying the coming together of two hearts from very different backgrounds, in a fashion more realistic than fairy-tale. I shall miss Hayami Saori’s Shirayuki.