Denki-Gai no Honya-san follows in the footsteps of last season’s Sabagebu! in that DGnHs completely departs reality for a world of parody and crazy joy. It went totally off the rails this episode, made fun of many anime tropes and had moments that were absolutely pants-crappingly hysterical!

Episode two gave us two acts, which were tied together by Sommelier’s love for Fu-girl. Also, and this appears to be a core point of the show, a general sense of pervyness was around every corner.

This week opened with a late night release party for The Devil is an Idol, a in-world LN advertised at the end of the previous episode. As with last week, the activities at the shop are only a foil for the interactions between the characters.

In this case, the activity sets the stage for everyone to go drinking together after work at a family restaurant that is definitely not the set from Working!! but end up back at the store because it’s too late to catch trains home and/or people are too drunk.

Sommelier and Fu-girl leave first and, because he is so tall, Fu’s head gets banged on several door frames before officially being put to bed in the break room.

Perfectly executed slap-stick aside, the act keeps posing the protagonist and Fu as having a thing for each other, which is getting Sommelier down. Until the morning…

The Protagonist wakes, straddled by Fu, who appears to be confessing her love. However, her true confession is that he has the face of the perfect Zombie and, to his horror, she has already done up his makeup.

It’s not clear what happens next, exactly. Except that Fu-girl goes crazy with zombie survival lust and beats the Protagonist senseless with a baseball bat. The whole scene would be disturbing if Fu-girl wasn’t so hilariously drawn. As is, it’s funny as hell!

The second act doesn’t really need the context it doesn’t have: everyone is participating in a battle-style contest to win 10,000 yen. Each challenge is pervy, bizarre, and designed to embarrass its participants to the maximum.

Everyone has fun or is horrified, which is great because DGnHs‘ jokes are pretty good here too — but also horrifying!

The scene is solidly funny, but in the back of my head I could hear part of my brain screaming! 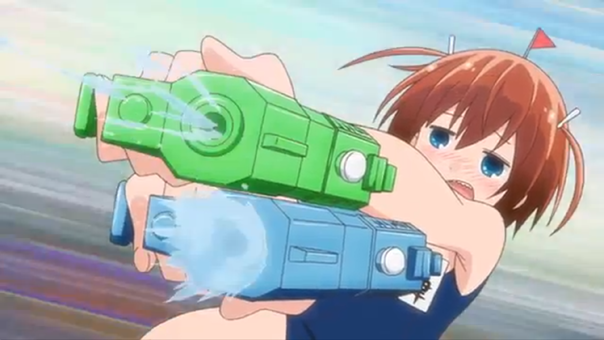 DGnHs solidly apes Sabagebu directly for much of this act. The gun play, the gruff no-failure nature and endless storm of cursing that comes out of Fu-girl. It’s all effective and fun.

But the best part is when Fu and Sommelier must ‘combine’ Voltron style to produce a mega water warrior. it’s totally stupid but absolutely on the spot.

If I was worried that week one felt too much like a knock off of Gekkan Shojo Nozaki-kun, week two banishes those worries. The show may well parody everything from last season, from general anime genres, and fandom at large — but I’m now certain it can do it in its own, mercilessly absurd voice.

DGnHs, you’re my kind of show! 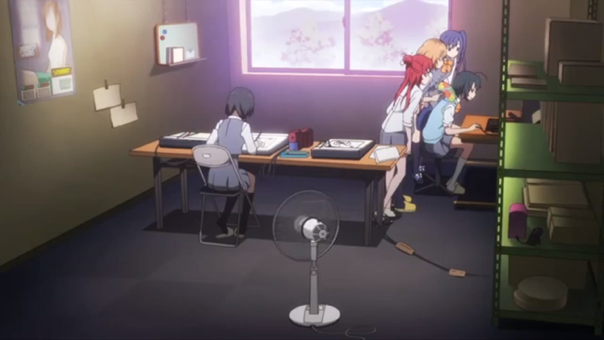 Shirobako starts with a team of 5 high school girls who form an animation club to produce their own mini-feature for their school festival. However, the show quickly blasts through to their graduation and then beyond to director Miyamori Aoi’s first televised work.

Shirobako is claustrophobically packed with characters and details about producing an animated series. We get to know all the steps, people, and process along the way, strung together by Miyamori, who rushes to keep it all together.

I found the characters easy to visually differentiate and, as only a few of them are important to the immediate challenges of the animation’s day to day, my complete inability to remember the 20+ characters and their jobs has not yet been a problem.

That said, I really have no idea who anyone is, except Miyamori. Even then, I had to watch episode one a second time just to see who she was earlier in high school.

She was the blond in charge who liked Donuts most of all! 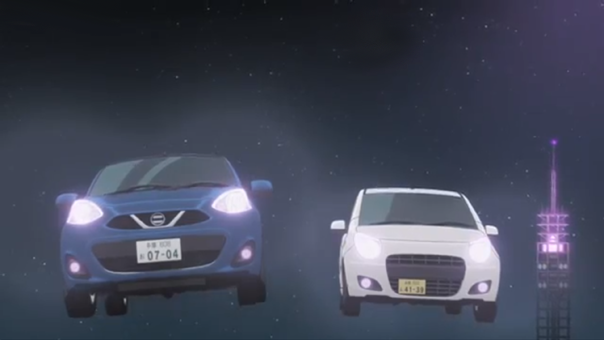 What’s the story? Shirobako presents the creation story of Exodus, a magical girl anime and first full season produced by a new studio. While operations run smoothly at first, an early mistake causes delays for episode 3, which sets a chain of delay-making dominoes tumbling and its up to Miyamori to drive people emotionally (and in her car) to pick up the pieces.

It’s tight, colorful, believable and, given that one of the contractors passes out (or worse by the end) Shirobako is also emotionally poignant. There’s a price to the anime we watch and Shirobako makes a case that we should care about the people paying it. 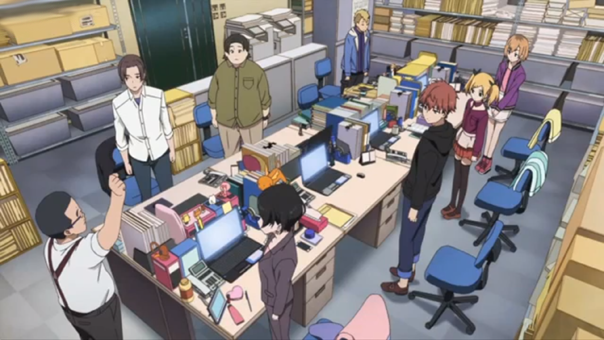 However I may feel about the artistic validity of it’s concept, I did enjoy Shirobako. I’m just not sure I have it in me to review it this season.