One would hope that in most political marriages, the participants would at least be given a certain amount of time to think about what it means. Raku and Chitoge aren’t so lucky; within moments of learning they’re to be a couple for the sake of peace between their families, they’re tossed into the deep end, and must immediately prove they’re hot for each other in front of contingents from both sides that are itching to start that war.

Under these circumstances, and in spite of the general…er, simpleness of the assembled soldiers, acting like a convincing couple would be a challenge even if they didn’t rub each other entirely the wrong way. So they aren’t that convincing, and it plants the seed of doubt in Chitoge’s own bodyguard Claude. When Chitoge and Raku are all but forced into their first date out on the town, there’s a wonderful progression of layering struggles the two of them must face. 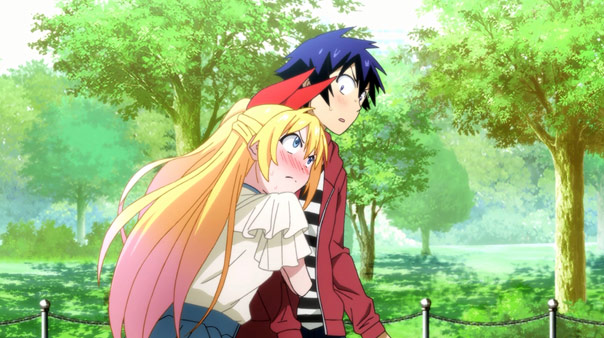 For one thing, neither of them have the slightest real-life experience with romance. The closest Raku has is his childhood promise to his mystery sweetheart combined with his ideal date with Onodera which plays out only in his head. When he uses that as a template, but Chitoge’s reactions run totally counter to his fantasies at every turn, from the roast of the coffee beans to the genre of film they go to.

While we’re sure the date is no picnic for Chitoge, the fact remains, Raku is going through all this while still harboring strong affection for Onodera. The girl he wants (and who seems to want him) is slipping through her fingers; in the ultimate torture, he has to at least half-play along as Chitoge pretends to be his honey in front of the gang, the yakuza, and Onodera, lest the date and the whole charade fall apart and war break out.

It’s an unenviable position, to be sure. We genuinely felt for both him and Onodera: lovers fated to reunite but held apart by cruel forces outside their control. That being said, even if she hadn’t just been told Raku and Chitoge were a couple, we’re not sure she’d have not lied to Raku about the locket, which she kicks herself for later. She should, because there’s every reason to believe Raku and Chitoge will eventually warm to each other. Right now their mutual hate is bourne out of clinging to the hastily-formed ideas about who the other is, supported by cherry-picked observations.

In reality, they simply don’t know much about each other. After one date, that’s changed: Raku learns Chitoge is fine with dwelling on the past if it’s romantic, and sees her for the gorgeous girl she is; Chitoge learns that Raku can be chivalrous, attentive, and contrite when necessary. They’re starting to see things in each other they didn’t see earlier because those things didn’t fit their preconceived notions. Logic suggests the more they learn about each other, the easier their fake relationship will go, until one day, it won’t be fake anymore. That would be good for their mutual sanity, and certainly good for their families…but it would suck for Onodera. 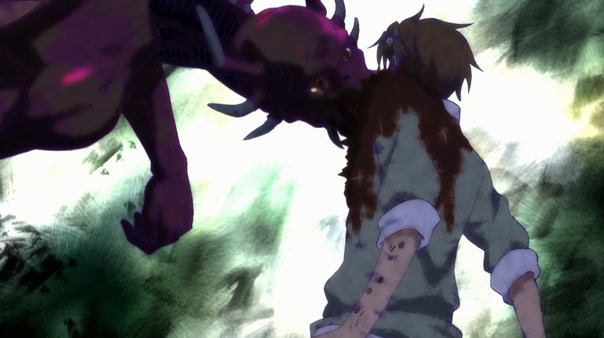 Time for our weekly check-in on Utsutsu and Yume, and there’s even time for a little backstory, which is about what you’d expect to be these poor kids’ history: both they and their mother were beaten mercilessly by their scum of a father, and after their parents divorced their mother lost interest in parenting altogether and abandoned them.

So yeah, not exactly childhoods full of love, and yet they still love each other, and neither of them is a bloodthirsty demon, right? Until now, that is. Some “researcher” named Maria shows up to tell Utsutsu that his voice won’t reach hers, but then he finds Yume in the woods chomping on some random bit of person and they can understand each other perfectly.

Unfortunately for Utsutsu, her little sister’s actions are now being driven by animal instinct, so when she tells him ‘she wants more’, she means more meat, now, and Utsutsu gets a gaping neck wound as he’s the closest meat around. That can’t be good! We’re still not quite sure what to make of these comically short series, but it definitely has a macabre, Kafkaesque allure about it.