There’s a pleasant affability to the opening episode of Noragami, owing to its straightforward, efficient, not overly-serious approach to storytelling, its crisp, fastidious Bones animation, and an always-welcome Iwasaki Taku soundtrack. It’s much more lighthearted than the promo art suggested, which merely shows that judging a show’s tone just by its promo art is probably a poor idea. Noragami takes a lot of stuff we’ve seen before in other shows, and tweaks things enough to maintain our interest, for now, at least.

Case in point: a girl being hit by a bus isn’t a horrific tragedy, but the catalyst that begins a transformation…and a friendship. That girl, Iki Hiyori (Uchida Maaya), is a cute MMA fan whose father owns a hospital. It’s quickly established that despite her normal looks her peers consider her a bit of an odd duck, so when her life takes a strange turn, what with the out-of-body-experiences and giant monsters, she takes it in relative stride, even defeating a phantom (the name of the baddies) with her MMA hero’s “Jungle Savate” kick. All this strangeness started right before that bus hit her, when she met Yato (Kamiya Hiroshi). 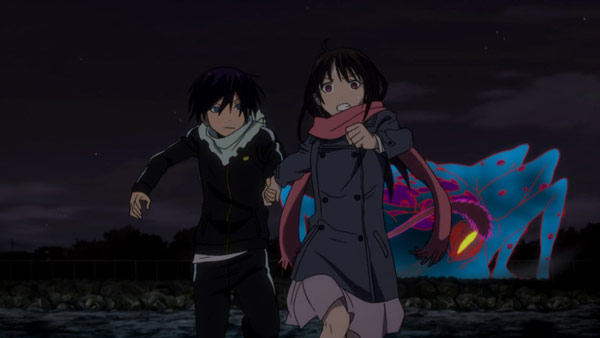 Yato’s a down-on-his-luck god wandering the near shore (the living world) for followers. His “sacred treasure” (a weapon with human form, a la Soul Eater) dumped him like a ton of bricks, and he needs a new one to send the evil phantoms back to the Far Shore (the afterlife) where they belong. We liken him to Kamisama Hajimemashita’s Nanami in that he’s just starting out and will have to earn the respect and love of his peers and humans alike. He’s got big aspirations, and is aiming for the top as a god with hundreds of millions of devotees. But it all starts with a found lost cat.

While he does end up under her covers in the hospital and she freaks out a little when she wakes up being carried on Yato’s back, we can gratefully report that the relationship of Yato and Hiyori isn’t limited to her hitting him and calling him a pervert, and we hope the show will continue to show restraint both with that and the panty-shots (just one this week). Hiyori seems mindful that Yato is actually an okay guy, and after paying him the customary five yen, he agrees to tackle her wish to return to normal. So, a decent start, but with such well-tread theme, it didn’t knock our socks off.

Solaris author Stanislaw Lem wrote: “We don’t want other worlds, we want mirrors.” We long for a distant future in which we travel the stars, but the creepy unknowns that await us out in space must be tempered with the familiar trappings of life on our planet, like restaurants stocked with hot waitresses. Space Dandy dwells in that tasty world between the comforts of the familiar and the thrills of the truly alien. This is no hard science fiction; it gleefully mocks stodgier archetypes of the genre, like Gundam. This is Science Comedy; It’s a circus mirror, and it’s an absolute gas from start to finish.

While taking place in a bafflingly vast and complex universe, Space Dandy’s underlying story is blissfully simple: Space Dandy travels the cosmos with his robot pal QT, hunting for new aliens to register; wacky adventures ensue.  Oh sure, interstellar wars between huge empires are waged, but far in the background. Space Dandy has a great head of hair, passable fashion sense, and a penchant for surprisingly deep monologues, while preferring asses to boobs. At the end of the day, he’s a bit of a boob himself, surrounding himself with obsolete or substandard technology (which is still pretty cool to us) and goes wherever the tides of fate take him, which is a fancy way of saying he just goes wherever.

There’s a lot of Star Wars influence in the sheer diversity of aliens we encounter, but packs a pulse and joie de vivre Coruscant’s streets were sorely lacking. One alien they pick up is Meow, who looks like a cat but is really from Betelgeuse, who they thought was an unknown because of the sticker on his cheek. Meow wouldn’t look out of place in a Chuck Jones cartoon, nor would the rocky landscape he and Dandy find themselves clambering around after a quick succession of decisions that send Dandy’s ship screaming in and out of normal spacetime and into the middle of a menagerie of gargantuan alien baddies.

In keeping with the episode’s cheeky attitude, in the end Dandy has QT activate an explosive device that obliterates the ship, the planet, and him, leaving us with the narrator proclaiming “No one will ever forget your gallant, appropriate actions…probably.” We like a show that’s not afraid to blow everyone and everything up in the first episode and start off fresh next week with a different observation of the human (and not-so-human) experience through the lens of a super-weird, ultra-colorful, manic universe where anything can happen and even the narrator doesn’t bother fully explaining everything. A great start to the Winter 2014 season. 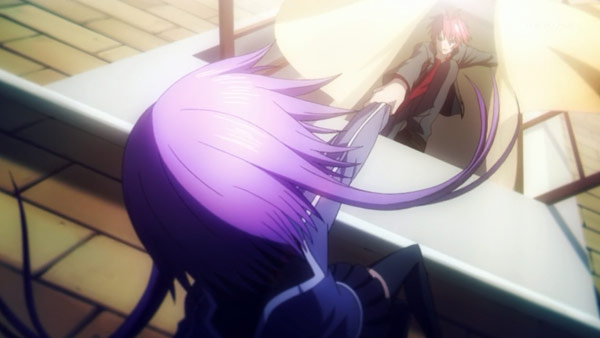 Sunday Without God comes to a moving close full of twists, tears, and drama. First of all, when Dee sees Alice and Ai playing basketball, she decides to end the status quo right then and there by making Class 3-4 remember the incident that led to their wish, then makes them act out April 28 as she jumps from the window once more, bringing it all to an end. But not only does Alice have no intention of letting Dee disappear, but Dee wasn’t even dead to begin with; he was.

In a twist that we were too preoccupied with Dee to ever see coming, it’s revealed that he was the one that had fallen to his death while trying to save Dee, and then forgot when he got caught up in the loops. The wish he got was Buzzer Beater, while Class 3-4 wished not for him to come back to life, but for eternity, a semantic difference that ends up making a huge difference in everyone’s lives. Alice and Dee aren’t as unaffected from the loops as they had thought, resulting in roughly fourteen years of believing the wrong person died.

The scene of a leaping Dee being caught at the last second by Alice, who in turn is caught by Ai and the rest of the class, is stirring, poignant moment that also illustrates conceptually what takes place to complete this arc: Dee resigns herself to a false fate but Alice saves her, and in the very end, Ai makes a wish that saves Alice. There’s a great “this is it!” finality to watching the town vanish as its inhabitants clear out, once the truth is known, but it turns out not to be the end for Dee or Alice.

Was that a cheat? It’s a matter of preference, but we didn’t think so. The ending followed the rules the show had established from the start: in abandoning the world and ending death, God gave people what He thought they wanted. It became a world where wishes could come true, and they did, resulting in all of the colorful characters with strange powers we’ve has come across. Alice had come to mean a great deal to Ai, so it’s no surprise she wished not to forget he ever existed, or for things to go back to happier times and never change. She simply wished for him to remain in her world.

This week more of the mystery of Class 3-4 is revealed, testing our theories about what’s going on, while Ai is caught between two people with differing goals hoping to enlist her aid, when all she wants is a resolution amicable to all parties involved, which may not be possible. Turns out we were right about Dee falling out that window, but it wasn’t her wish for what ultimately became the timeloop; it was the rest of the class. After that, for fourteen years she stayed by the side of Alice, someone she knew was a nice guy but had barely spoken to before her fall.

So here we have Dee desperate to keep the looping world going, not only because she doesn’t want to disappear, but because she wants to keep living in a world with Alice, even if she doesn’t deserve to have him return her feelings. She’s so desperate, she even killed Alice many loops ago in hopes that his need to break the timeloop would reset when he respawned. Instead, he was granted Buzzer Beater, which made his passion of basketball a meaningless bore, since he could never miss again. And he continued to save the world—the only world where Dee could remain alive—by destroying it.

We hear much of this from Alice’s own mouth, both in narration and in an initially tense scene in the library with Ai, when we’re not sure just how far she’s willing to go to maintain the status quo. And while Alice considers her “the enemy”, she doesn’t come off as a villain at all; she’s just trying to survive, and doesn’t want Alice, someone whom she’s fallen in love with, put in the position where he’d make any sacrifice to save Class 3-4, since that would make her “useless” to him. In any case, we’re sympathetic to her cause, selfish as it is, and so is Ai.

No, Dee’s no villain; if anything, she’s a victim. For one thing, someone really should have been spotting her on that tall ladder. Secondly, the class made the wish, not her. Thirdly, barring the magical cure-all solution Ai holds out hope for, things don’t look good for Dee or the status quo, as the very presence of Ai in Class 3-4 is gradually destabilizing the false world, drawing it closer to collapse. Alice remarks that granted wishes keep people from moving forward, but it’s small comfort for someone like Dee who literally can’t. We’ll see in the final outing if Alice means with he says, and after fourteen years with Dee, if moving forward is worth her sacrifice.