Space Dandy is the intergalactic comedy that takes its time and hangs out in bars—ramen shops. When none of Dandy’s alien quarry turns out to be rare, he ejects Meow into space, only letting him back into the ship when Meow promises he knows the location of a Phantom Ramen. A wide-ranging culinary journey ensues, with the contents of the bowls growing more bizarre and outrageous as Dandy’s bank account empties.

So what happens here is that Dandy, eager to make a buck, agrees to spend what money he does have matching noodle bowls with his unreliable new sidekick, who Dandy knows is only interested in eating and wasting time. All the while, Meow is inadvertently telling the enemy Dr. Gel exactly where they are by tweeting each restaurant they patronize. Dandy also meets the lovely (and limber) Scarlett, who takes out the first wave of Gel’s foot soldiers not to save Dandy, but as payback for spilling her bowl. 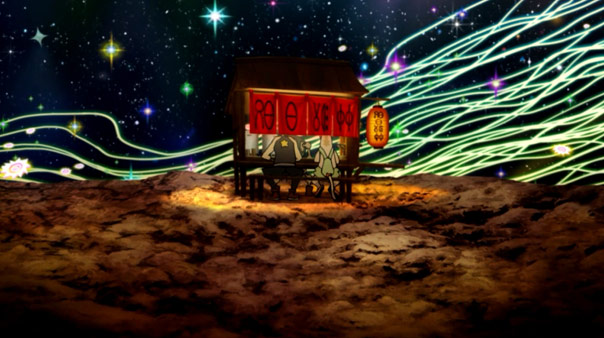 Honey may give Space Dandy the time of day, but that’s her job. Scarlett is not the least bit seducd by Dandy’s wiles, especially when he asks for money. Still, once QT discovers Meow’s tweets and his phone is disposed of, the threat from the Gogol Empire is neutralized. It’s about this time when we started wondering how Dandy & Co. get themselves killed this week, but the episode’s final act didn’t follow that pattern; not exactly, at least. The only similarity to last week’s ending is that Dandy and Meow end up in another tense, dangerous situation, as the source of the stale but tasty Phantom Ramen turns out to be in a wormhole.

But after that mind-bending journey they emerge on the other side in a very calm, eerily gorgeous alternate dimension, and the comedy is put on hold for the surprisingly moving story of an ancient Earth-trained alien ramen master, possibly inspired by Jiro Dreams of Sushi (which we still have yet to see). The alien lives there alone for centuries, and his tears are the secret ingredient. After hearing the old alien’s tale, out of deference, Dandy lets him decide if he wants to come back with them. He declines, and in a hint of karmic justice, Meow loses his to-go bowl in the wormhole, and only Dandy gets the final taste ever. 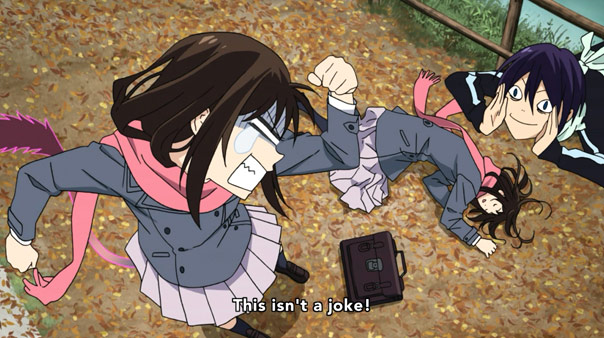 There’s a funny cutaway to Hiyori’s past when her mom first warns her about “useless members of society”, while she considers whether Yato is such a person. After all, her out-of-body experiences are really starting to be a problem (even if she has a group of dependable friends who laugh it off as narcolepsy), yet despite promising to “fix” her, he hasn’t done anything in two weeks. This is a classic introduction of someone “not at their best”, which makes both the skeptical party and the audience that much more impressed when we finally see them at their best, or something like it. Yato’s performance in the climax of this episode provides Hiyori with her answer: he’s not useless.

What we love about Hiyori’s predicament is that it’s a double-edged sword, not just a ‘curse”. She never knows when it’s going to happen, nor do we; the show manages to surprise us along with Hiyori with it every time. But when she’s in “Far Shore Mode” she’s also free of her human limitations: she can leap huge distances, run along power lines, and can put serious power behind her MMA moves. These new abilities fuel her confidence that she can help make her god less useless by finding the regalia he needs to cut Phantoms. Then, when she snags a giant tick-like phantom that then starts chasing her, she learns that finding an uncorrupted soul suitable for regalia duty is no simple matter. 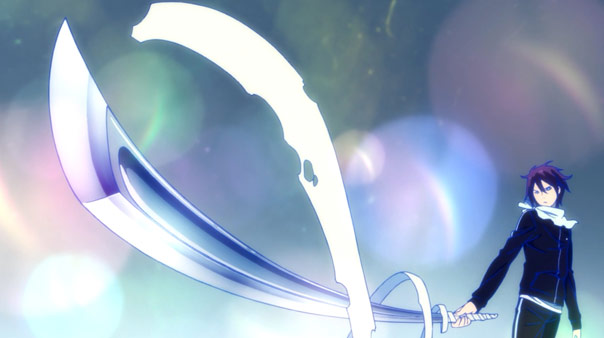 Meanwhile, Yato isn’t really useless, he’s just incredibly small-time at the moment, finding lost pets or scrubbing mildew from baths in exchange for 5-yen coins and the occasional beer. He’s not content with this, but if he wants that lavish, subway-adjacent lavish downtown shrine with three shrine maidens massaging him at once, he needs a weapon. Perhaps overwhelmed by the difficulty of that task, he seems to be slow in getting things moving. Enter Hiyori: it’s when she’s in trouble that Yato notices Mr. Right Soul from several hundred yards away, a little dot of light floating around a mailbox—right where it was floating in the very beginning of the episode, unbeknownst to Hiyori. Nice subtle foreshadowing there.

Our impression of Yato’s casual pace to life is bourne out of the fact that because gods live so much longer than mortals, two weeks is less than the blink of a bird’s eye. Yet his transformation from defenseless punk to tick-dominating badass happens before Hiyori’s eyes in no time at all. Unlike many situations like this in anime, where contracting with your weapon takes at least a whole episode, here it happens refreshingly instantly…and it’s Sayonara Ticky. Just as Yato proved that he’s someone Hiyori can put her faith in to (eventually) fix her, Noragami has proven it’s a show worth our attention; further elevated by Iwasaki Taku’s eclectic, thumping soundtrack, which is very assertive throughout the episode. 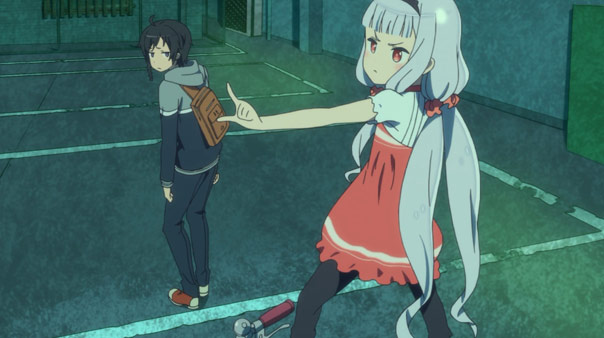 There’s something highly amusing (and cool) about a well-dressed, lost-looking young lass on a pink bike (with training wheels) spouting off about world conquest and not only meaning it, but being able to back it up with zeal. With an already full Winter season, we were kinda hoping to fly under Sekai Seifuku: Bouryaku no Zvezda (which we’ll shorten to SSBZ henceforth), possibly saving it for marathoning later on (like we did with Sunday Without God, or what we’re going to do with Nagi no Asukara‘s second half).

Alas, it’s first episode was, like that out-of-place girl on her bike, too conspicuous to ignore, and too absorbing to put off. The premise of the show that neither tanks nor law and order are enough to protect the world; only “Conquest” will do the trick. For the purposes of this episode, “Conquest” means being soundly beaten and having “Conquered” branded on you. They  could be dismissed as inane ramblings of a petulant waif, were she not capable of actually supporting those ramblings with real tank-busting power, and supported by a very stylishly-attired retinue of loyal followers.

Hoshimiya Kate (Kuno Misaki), is alone on her bike during martial law because she’s starting to question whether there’ll still be a place for her in the world once she conquers it. This is how she meets middle schooler Jimon Asuta, who’s trying to conquer a different kind of world (his life) by running away from the parts he can’t control. He’s a decent lad who offers Kate food and later catches her when she falls from her bike, and for his kindness, she recruits him as part of her world-conquering organization, Zvezda, immediately making his life far more interesting and fun than it had been earlier that evening.

We like the idea of Zvezda fighting against the same forces the Gatchamen would fight alongside; there’s a plucky, impish appeal to their selfish (not selfless) mission. Like Jormungand or The Unlimited, we’re watching things from the perspective of the bad guys, who can often be more fun to watch than the good. And like the dual-identity characters of Star Driver, Kate and her officers have no shortage of charisma, infusing every line and action with maximum panache. Finally, we appreciated that the momentum was never arrested with in-depth explanations of the nature or origin of Zvezda’s awesome powers.