It happens sometimes in RPGs: You come upon a boss you just can’t beat, either because you’re underleveled (as Naofumi and his party certainly are), or because you’re meant to be rescued so that a potential ally even more powerful than that boss can be introduced.

That’s what happens in this thrilling episode of Shield Hero. The “dragon emperor” (read: souped-up dinosaur) wreaks havoc in the town after smushing Idol, but Filo’s able to use her fragment to lure it out of town to a lake where they can fight without collateral damage. 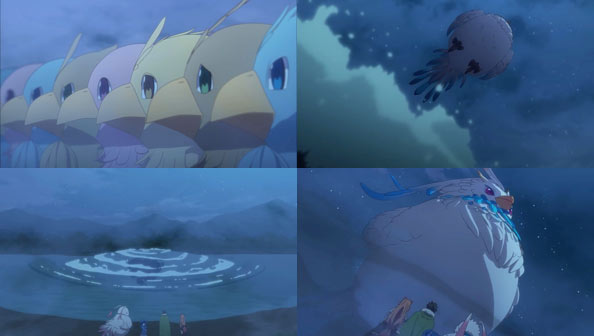 Only the best Raphtalia, Filo, and Melty have isn’t enough to scratch the dragon. Naofumi prepares to bring out the Rage Shield, but a mysterious voice warns against it. Then a massive retinue of slim, disciplined Filolials march out of the forest and circle the boss.

Then something comes out of the lake—something huge: the Filolial Queen. That’s right: for sixteen episodes we’ve waited in vain for Melty and Malty’s mom to take the stage and use her authority to bring an end to Naofumi’s persecution. But a very different queen beats her to it.

After a magnificent entrance that really drives home the difference in scale between the Filolial Queen and the party, she confronts the dragon face to face and gives it a chance to surrender its fragment. When it refuses, she delivers a kick for the ages that throws it back hundreds of feet.

Not interested in a quick fight, the Queen finishes the dragon off quickly and decisively, with an attack so lightning-fast we can’t see it. The Queen then transforms into human form and introduces herself as Fitoria, voiced by Cardcaptor Sakura, Cardinal, and Saber Nero herself, Tange Sakura.

To Naofumi’s shock, Fitoria has been around for centuries, ever since she was raised by a previous Hero and tasked with protecting humanity in their stead. Her prodigious age and experience means her warnings about Naofumi’s overuse of the Rage Shield carry weight.

She also has many questions for the Shield Hero, so she bid he and his party get in a carriage, which she uses a portal to teleport them to some ruins that serve as a filolial sanctuary. There, she samples Naofumi’s cooking, and her lesser filolial subjects’ puppy eyes force him to make enough for everyone.

With the rest of the party sleeping off a long, hard day, Fitoria and Naofumi talk, speficially about her and the Cardinal Heroes’ symbiotic relationship. She is currently more powerful than any of them, so they’ll need her for the tougher Waves to come; seeing Glass in action proved that.

But while she’s very powerful and has lived a long life, she isn’t immortal. When her power starts to wane and flicker out, she’ll need the Heroes as much as they need her now to protect the world—not just Melromarc—from the Waves. This is all news to Naofumi.

Which brings us to her main complaint: the Heroes cannot under any circumstances be at odds; even the classically shunned Shield Hero. He must find a way to reconcile with them. When he outright refuses (and not without good reason…we know what he’s had to contend with) and assures her he won’t be convinced to make nice with the other heroes, Fitoria’s demeanor grows very grave.

She informs him that in the event the Heroes can’t get along, it’s her duty to kill them, for “the sake of the world”, as four dead Heroes are apparently preferable to four warring ones. For his sake, I hope Naofumi changes his tune and entertains diplomacy. Otherwise, this show will be without its titular character for the balance of the series…which seems unlikely.