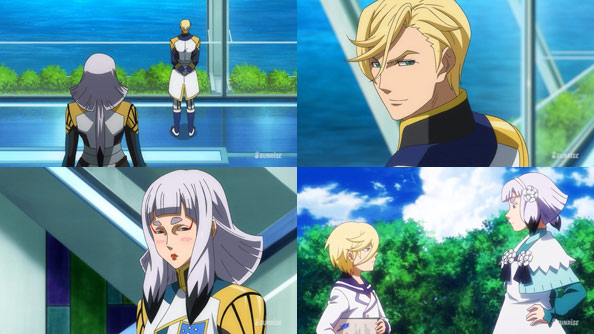 Commander Carta Issue is ready to accept the consequences for her latest humiliating failure at the hands of Tekkadan, but Lord Iznario says she’s being given one last shot to redeem her pride honor. It’s thanks to an unlikely benefactor: McGillis himself, whom Carta can’t help but blush before when they meet on the stairs.

Carta may believe herself a worthless, humiliating failure, but she forgets that when she and McGillis were kids, she always treated him as an equal, despite everyone around them saying they weren’t because of Gill’s low parentage. All that mattered to Carta was that McGillis was a Fareed, and he should always stand proud and strong.

Now McGillis is simply asking her to do the same, and she will. But who knows the true reasons he wants her to fight Tekkadan once more, and how that coming battle fits into his grand plan to reform Gjallarhorn. 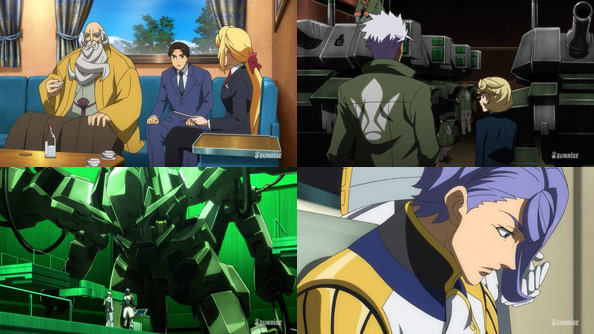 As the Edmonton Express proceeds unabated, Merribit is increasingly concerned that the orphans of Tekkadan, including Orga, have gone mad in their thirst for revenge, and that it can’t possibly end well. But those same kids she wants to keep out of the fight tell her to back off. They’re fighting for Biscuit, and they will not be denied.

If only Gaelio could fight for his dead friend Ein. We see the toll Ein’s transformation into essentially a half-Gundam takes on Gaelio. Just as the Tekkadan kids are being metaphorically hardened into killers (which Merribit hates), Ein has been literally weaponized. He no longer has the luxury of choice, nor does he want it; he is still “alive” to avenge Crank and his other fallen comrades.

I never thought I’d be comparing Gaelio and Merribit, but here we are: both are appalled and scared of the sudden turn things have taken, but I don’t think either will be able to resist the force of the currents they’re caught up in.

Even more unsettling is that Carta is, on some level, being thrown to the wolves by McGillis, with Gaelio and Ein sure to follow. Carta doesn’t realize the extent to which killing Biscuit radicalized Tekkadan.

She also quite wrongly assumes their patience and willingness to have a good old-fashioned 3-on-3 duel to decide whether they may pass or whether they hand over Makanai and Kudelia. Mika, in particular, isn’t having it. Why should they? Chivalry in this situation doesn’t do them a damn bit of good.

Carta magnanimously gives Tekkadan 30 minutes to prepare, but Mika doesn’t need one. He rushes Carta and curb-stomps her two McGillis lookalikes. He doesn’t just disable their suits, he kills them, and then starts mercilessly whaling on an overwhelmed Carta. Even Lafter gets a little squemish at the sight of the carnage.

She rants about how this can’t be and who she is, but Mika doesn’t care about any of that, and neither do the kids who are watching (and won’t let Merribit send them away). Carta and Gjallarhorn are the enemy, and they’re in the way, so they’ll get crushed.

For a few moments, Mika is the bully, the antagonist in this fight, and Carta is like a lamb in the snow I’m feeling sorry for, even though she shouldn’t have expected anything else. It was a little hard to watch. 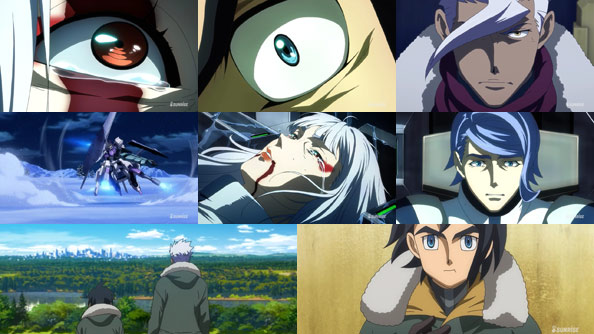 A weeping, utterly defeated Carta is only spared from death at the last minute by Gaelio, but her injuries draw comparisons to Ein’s when he was last defeated. Could Carta end up the brain of another Gundam, like him? I don’t know, but Gaelio doesn’t have the heart to tell her he isn’t McGillis. McGillis, presumably, has moved on to other steps in his big plan.

The train makes it to the gleaming city of Edmonton, on time and ready to deposit their passenger right smack-dab in the parliament when the time comes for elections. Orga calls the city “the enemy’s grounds.” Mika listens, as he pops a snack in his mouth, unsurprisingly none the worse for emotional wear after his 3-on-1 beatdown.

But he used to just follow orders; take out those who he’s ordered to take out, because orders were orders. Now he’s finally seeing those he takes out not just as targets, but as enemies; those who stand in the way of Tekkadan getting to a place where they belong. If anything, this realization only makes Mika a more potent weapon.

As for Merribit, she seems to have taken on the thankless mantle of Tekkadan’s conscience, thinking about a future beyond the next battle’s outcome, like Biscuit did before. But is that future the “Final Lie” of the episode’s title?