“You cannot truly become an adult.”—our Masked Man McGillis’s words in the cold open. Those words didn’t stick with me throughout this phenomenal episode, but gradually gained significance as things progressed. Masky is surprised by how excited he is. Disguising himself so he can visit Dort, the front lines of the upcoming rebellion, has brought out the little kid in him. The Mask protects his identity, but he’s still exposed and untethered, and we can only guess what he’s up to.

When Mika tells Fumitan he knows something is on her mind (he just doesn’t know what), she talks about things adults are supposed to have, like responsibility. Only hers are dual: both to protect Kudelia and watch her. But hanging out with all these kids, and Kudelia in particular, has brought out the kid in her too, and before she knew it she’d disobeyed orders, irking Noblesse.

Meanwhile, someone who believes he’s one of the most responsible, pragmatic adults around, Savarin, wears the suit of a salaryman, occupies a cubicle, and informs on his little brother the minute he sees Atra with him. We’ll later learn Savarin has replaced the family of his childhood with the responsibility of adulthood: working to keep the working class society of Dort from exploding into chaos and blood, but also working to preserve his own skin.

The workers are lead by union boss Navona Mingo, who gets Orga’s team out of the line of fire and hides them in the slums, where he casually asks them to join his fight. He seems to shrug off Orga’s declining, but I somehow doubt that’s the end of it. Meanwhile, Gaelio and Ein are ready to go, but the captain of their ship is able to delay him by spewing a lot of bureaucrat-babble that impresses a junior officer. What’s this captain’s angle?

Betrayal is bad no matter who does it, so when Savarin betrays Biscuit, who idolized him and lived his very life by his example, has got to be devastated when Gjallarhorn arrest him and Atra. But the reason they’re doing so is because they believe Atra is Kudelia Aina Bernstein, Goddess of the rebellion. This is a misunderstanding Atra quickly picks up and runs with, to protect Kudelia, her family, from harm. 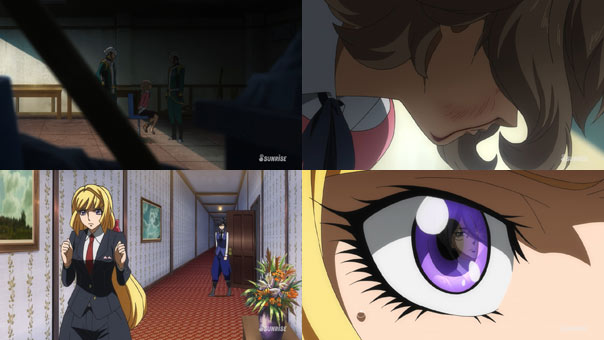 This gets her beaten by the Gjallarhorn soldiers trying to get rebellion intel out of her, and the sight of Atra being roughed up, her legs, one missing a boot, dangling from the interrogation chair, is almost too terrible to behold; she is only a child, for crying out loud.

But Atra’s blood is iron; forged and stiffened on Mars from an even younger age than she is now. She knows how to take a beating; she used to endure them every day. Now that she actually has someone to take it for (rather than punishment for some petty slight), she’s all the more resolved. Her toughness in this situation brought a tear to my eye.

Speaking of eyes, when Orga learns through Navona that Biscuit and Atra have been kidnapped, he relays the info to Mika, who tells Fumitan to keep Kudelia safe while he rescues them. The “foolish, innocent child” Kudelia tries to sneak out anyway, but Fumitan stops her, and can’t help but remark how her “clear, honest eyes” haven’t changed since she was a young girl, and how much she’s always hated those eyes and wished they’d cloud up from reality; from adulthood. 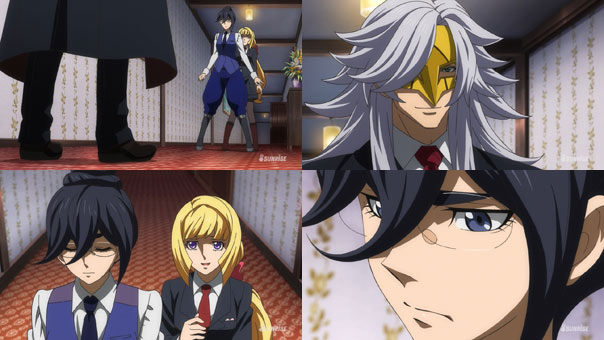 Hope and idealism, like the giddy excitement McGillis is feeling, is for kids. Reality and stern responsibility is for adults. And speak of the masked devil, MaskGillis shows up right there and then, revealing to Kudelia not only how Nobliss Gordon has been using her, but how he’s had one of his own by her side all this time.

Sensing this moment of betrayal could be a chance to finally cloud those eyes, Fumitan does not deny the masked man’s claims, and Kudelia is devastated. Fumitan then leaves Kudelia’s side, but Kudelia can’t help but go after her, even when Masky tries to hold her back and remind her of her responsibility. But is this all a game? Was Mask’s intention to use the truth to put Kudelia in a more vulnerable position?

It’s a shame Mika wasn’t around to mediate things, but he’s occupied with being a one-man rescue team, finding Atra’s boot in the streets, seemingly following her scent to where she’s being held, crashing a truck into the building, and taking out all the guards off-camera before bursting in.

Meanwhile, Kudelia is out in the open, searching desperately for Fumitan, while a full-blown armed uprising of Dort’s working class is about to explode on the same streets where she calmly shopped just hours before. She’s too concerned with Fumitan to realize the danger she’s in, or the merit of staying put so Mika and the others could meet up with her.

She’s acting like a child would, only considering one thing at a time and rushing at it with reckless abandon; unknowingly squandering the sacrifice Atra made to keep her safe. But it’s not all her fault—because you cannot truly become an adult.