After some wrangling, Therestina Kihara Lifeline gives Mikoto a lead: whomever created Febri, a “chemicaloid”, want the world to know they exist, perhaps during the upcoming assembly. Uiharu searches through past participants and Kongou recognizes Aritomi Haruki on a file, and ties him to Study Corporation, which owns a suspicious old factory. Mikoto goes there to find ITEM destroying its security robots. When they leave she breaks in and finds Nunotaba Shinobu, who hands her the recipe for Febri’s candy. Airtomi arrives, saying it’s a fake, and offers the real stuff in exchange for Mikoto accepting a paralyzing shot. She does, but he destroys the vial anyway, calling Febri an expendable spare for their greatest invention: “Janie.”

Tokiwadai’s Level 5 Railgun has gotten a harsh education in the realities of Academy City. She may claim to “love” it , but not all of it loves her. As she lives her happy top-flight esper high school life with her regal title, it’s not surprising that she’d lose sight of the very real unsavory elements in the city, including a group of non-espers toiling in obscurity, seething in envy and resentment as the espers of the city get all the attention, utterly unable to do anything about it. In this episode Therestina and Aritomi both pay her sarcastic deference to her title, as if to pat her on the head and say “oh, you silly!”

Of course Therestina is safely behind bars, and can only gloat about having put Mikoto in a bad mood (which subsides when Kuroko assures her that – Level 5 or not – she loves her onee-sama). Aritomi wants to experiment on Railgun, and by episode’s end, he has her right where he wants her: isolated and defenseless, with the clock on Febri running out. Nunotaba is caught in the middle; her compassion for Febri mirrors her compassion for the MISAKA clones. But Aritomi doesn’t care about any of that. Very soon, that tank labeled “JANIE” will open, and if his plans succeed, the world will know he and STUDY Corporation exist. 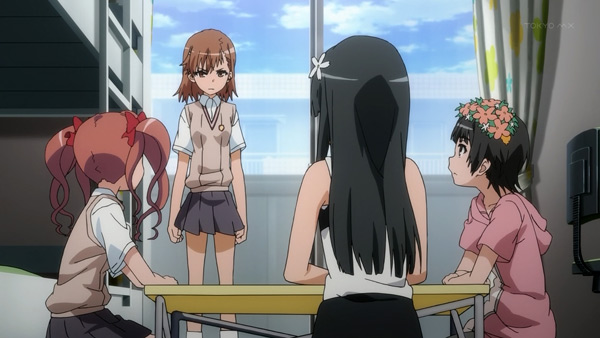 Heaven Canceler tells Mikoto Febri’s body creates a poison that must be neutralized with her lollipops. Finding her creators is the key to helping her, but they’re likely in the underground. Mikoto plans to look for them herself, but after Kongou tells her about her similar situation, she decides to tell Kuroko, Saten, and Uiharu, who immediately begin an investigation. After analyzing the candy, Canceler determines Febri has only 72 hours to live without more lollipops. When Mikoto tells him she’s resolved to save her, he arranges a meeting between her and the incarcerated Therestina.

Early in the episode, things were starting to feel all too familiar: Mikoto learns a dark truth about her charge; Mikoto decides to keep it all to herself and not get her friends involved; Mikoto conducts a sloppy, inefficient investigation, gets caught, and gets her ass kicked. Fortunately, she too realizes she’s on well-trodden ground. Last week Kongou saved her and the others; this week Kongou saves us by unwittingly convincing Mikoto that this time, she should tell her friends, since true friends share joys and dangers. Her encounter with an oblivious Kuroko before setting out is the catalyst that induces her to tell everyone about Febri’s nature, her suspicions, her past dealings with dangerous people.

After saying all this and voicing her uncertainty she’ll be able to protect them from the coming “darkness”, as Canceler puts it, the three girls react exactly how we thought: they don’t give it a second thought and thrust immediately into Investigation Mode. You can see it on Mikoto’s face as she beholds this: she may be good at kicking ass and making powerful enemies, but these girls may well be better than she is at this kind of stuff. It probably also occurs to her that things may have gone more smoothly had she also called upon them to help her in the Sisters arc. But the important thing is, she’s no longer doing things herself, which means those who must answer for their misdeeds will have more than just her to deal with.