Step by step, episode by episode, Sora yori mo Tooi Basho keeps building up the anticipation while continuing to build up the stories of its characters and their growing friendship as they embark on a life-changing adventure…but they still need permission from their parents!

That’s when we learn Mari hasn’t so much as mentioned this life-changing adventure to her mother, who has to find out from the neighbors. The slasher film-esque scen in which Mari tries to break the news she senses her mother already knows is a tour-de-force of tension and comedy. 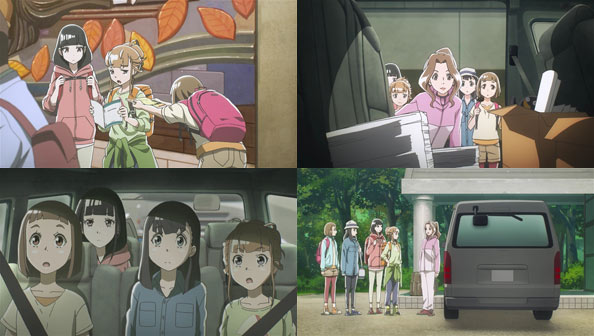 Mari gets permission…but only if she passes all of her tests at school, meaning she’s going to have to study her ass off, and nobody is going to help her, because if she can’t do this much, how is she ever going to make it in the Antarctic?

The quartet meet up to be whisked off to their mountain training retreat, and while they’re underwhelmed by the beat-up HiAce, their instructor Maekawa (Hikasa Yoko) notes they’ve got to pinch every penny (she also mentions that Shirase still has her million yen, and in the next sentence, the fundraising needs of the expedition).

She also remarks that those outside of the expedition team have always been concerned about its viability and whether the ship will even leave port. But Maekawa tells the girls they tell those people to shut up. Back at school Shirase doesn’t even do that; she’ll show everyone up when they least expect it, leading to this golden exchange between her and Mari:

Mari: You’re kind of a jerk, you know.
Shirase: I certainly am. You mind?
Mari: Nope!

Once they arrive at the mountain training course, they are quickly given an overview of the basics, and then Maekawa introduces the expedition’s leader Toudou Gin (Noto Mamiko in her tough lady voice) whose no-nonsense demeanor and stirring oratory intimidate and inspire Mari, Hinata, and Yuzuki in equal measure.

What about Shirase? Well, she reacts differently; clearly they know each other, and Mari senses that, but leaves it be for the time being. That night, as the girls bone up on Antarctic exploration in what feels like a field trip sleepover, Maekawa and Toudou share a solemn moment outside.

Toudou didn’t want Shirase on the trip, but Maekawa didn’t help her; she got there by her own efforts (with the help of Mari, Hinata, and Yuzuki, but she befriended them on her own). Toudou accepts this, but the fact she know Shirase’s mother weighs on her.

The next morning, the quartet is sent off to plot a route with a compass, GPS, and marker flags. They start out a little rough and off course (as everyone does at first), but Mari turns out to have a knack for the compass, and soon they’re on the right track, make camp, and settle down for bed.

Mari doesn’t want to sleep yet, thinking this is like any other camping trip, but getting enough sleep is crucial to survival, so the other girls promptly rebuke her attempts to converse. Only Yuzuki flubs her words, leading Hinata to start giggling, which leads Hinata and Mari to start laughing.

Things turn a bit somber when Mari asks a clearly preoccupied Shirase how she knows “Captain” Toudou, and Shirase’s answer is heartbreaking in its brevity: “Toudou and my mother were friends in high school. They both went to Antarctica. Toudou returned. My mother didn’t.” 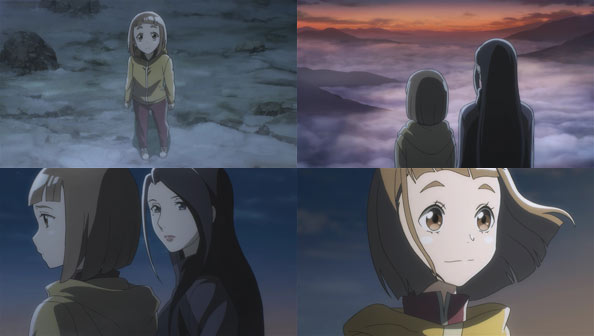 After a quick by-the-book radio check in with base, the four go to sleep, but Mari, who opened her bag in her sleep, is the first to awaken, and is greeted not only by a gorgeous pre-dawn, but Toudou, almost standing guard out there. Mari asks her about Shirase’s Mom, Toudou says she was “very strange” (sound familiar?) and that her daughter is her spitting image in stubbornness and conviction (not surprising).

Shirase, like her mom, is “trouble”, but Mari says “Isn’t trouble the best?” Indeed, it’s Shirase’s trouble(s) that got Mari to this point, where she’s finally realizing her goal of making the most of her high school years. She didn’t want them to end “the way they were going”, and so decided to join Shirase of her own free will.

This is Peak Awesome Tamaki Mari right here, clearly expressing her intention, desire, and excitement for the impending expedition. And when you see that conviction on her rising sun-washed face, you know she’s going to pass all of those tests. She has to.

Before the sunrise is complete, Mari wakes up the others (none of whom are morning people), and they all climb up a rock face and admire the beauty of the glowing mountains; just a small taste, mind you, of the jaw-dropping, otherworldly majesty they’ll experience way down south.

And in one of the more surprising ways to end the episode, Mari sends a picture of the sunrise to her friend Megumi, who looks incredibly lonely and left out. It occurs to me that Mari never once asked if she wanted to come along. Is this closing scene meant to convey that Megumi is proud of Mari, or dejected over Mari not even considering her participation?