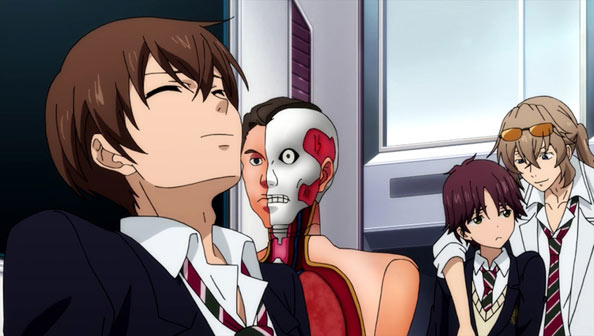 Just when Twenty Faces surfaces with a new intricate plot into which to lure Akechi and the Boy Detective’s Club, Hanasaki is stuck at school, attending his compulsory school day a month. That hardly sounds like enough to make a difference, but Akechi insists, keeping Hanasaki out of this week’s action.

As for Twenty Faces’ plot, well…it leaves a bit to be desired. The most impressive feat he accomplishes is when recorded video of him correctly predicts Akechi’s responses, making for an unexpected bit of dialogue between the two that initially sours Akechi’s interest in taking on the case, which involves a police officer Twenty captured. He changes his mind when Kobayashi exhibits some fire, then pairs him up with Inoue Ryou.

The clashing personalities make for a promising dynamic, but all they really do is trudge through some dark hallways, try to hide using the lamest tactic imaginable (a stealth umbrella, not bothering to move to the edge of the room), and get trapped in a chamber, the doors to which Kobayashi can’t bust through even as it starts to fill with water.

Throughout the episode we get flashbacks of Ryou and the mission that led to his paralysis and his partner, classmate and tennis star Katsuda, to quit the club. But this backstory seems shoehorned in and doesn’t really gel with the present events in any meaningful way, other than for Katsuda to warn Hanasaki “always listen to Akechi.”

All that aside, I can hardly feel apprehensive about Kobayashi being trapped in a chamber filling with water when it’s already been established he can’t die. That, and backup will probably be on the way before they have to worry about Ryou drowning.

In previous episodes I could at least look forward to a case beginning and then ending within the space of twenty-odd minutes, but the cliffhanger tries my already thin patience. I’ll see how things are resolved, I guess, but after that…likely Dropsville.

UPDATE (27 OCT): After further deliberation, I’ve decided to summarily drop Trickster, effective immediately. To fill the gap it leaves, I’ll be taking over reviews of Fune wo Amu from Zane.

Trickster continues its somewhat unambitious competence with another case-of-the-week, and I’ll admit I had to really fight not to immediately dismiss this week’s client—an elderly woman whose son is missing—as the culprit once more.

The search for the old NEET becomes Kobayashi’s official trial run: Inoue thinks it’s too dangerous to keep the kid around, but Akechi is willing to give him a shot. I would mention, however, that this is the third straight week Kobayashi threatens to run off and tells Hanasaki to leave him alone. Dude, do you want to die or not? Continued instances of this behavior will be annoying.

Hanasaki sees value in the kid, and actually wants to convince him to drop his death wish. That value is clear when the two infiltrate the creepy cult / corporation that essentially stuffs old people into pens, and when the time is right, harvests their organs, then tosses their bloody organless bodies on the floor to be disposed of by a central “body blender”…all in the middle of a room with windows for all to see.

This company of organ smugglers couldn’t be more idiotic, but in the universe of this show, apparently the city is full of murderous assholes wanting to make a buck. The former police medical examiner seems to be the ringleader, and talks a very thin argument about saving lives, but let’s get real here: dude wants to get paid. 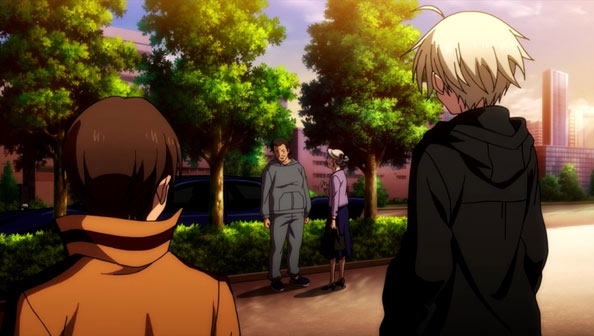 The security guards of the facility are also armed, which I didn’t know was legal in Japan. Then again, these guys are making ElderSmoothies so it stands to reason they’d flout gun laws. Hanasaki survives their assault thanks to Kobayashi’s impenetrable shield, and thanks to Noro’s technical expertise, the good guys have the bad guys on tape doing fucked-up shit and the police arrive to arrest ’em. They also found the guy whose mother hired them to find, so Case Closed.

What a dumb case! But you know what? It was still fun, if not particularly intellectually stimulating. Hanasaki’s got an endearingly casual attitude towards everything, and Kobayashi may be whiny, but he’s got a good heart. Also, Twenty Faces seems poised to show up next week to challenge Akechi and his agency once more. Presumably he’s less idiotic than the last two baddies. 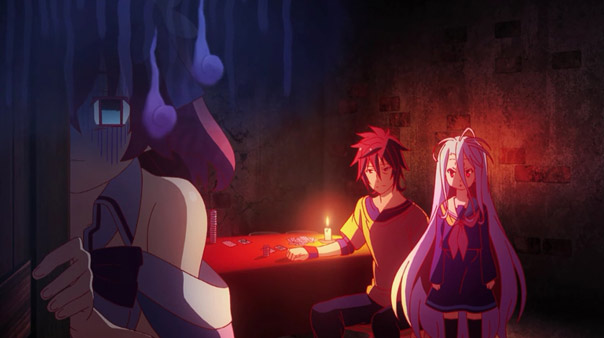 When it comes to games, say Blank, “They’re always serious.” The same, ironically, can not be said of the show they’re in. NGNL showed a glimpse of its serious side in reiterating the importance of—and difficulty in—saving mankind from subjugation at the hands of the Exceed, and even though there’s no war, the pledges have done plenty of damage all the same, to the point where the three million people of Elkia are scared and anxious about the future.

But like I said; only a glimpse of seriousness, and just a teensy one. The majority of the episode is devoted to Steph challenging, losing, and being humiliated over and over by Blank, in an intermittently humorous effort to make Sora a decent person. But it’s unnecessary because despite looking like they’ve done nothing but eat, sleep and play games (as NEETs are wont to do), Sora and Shiro have been working furiously for their new kingdom. Their only problem is, they’re not sure how to proceed. 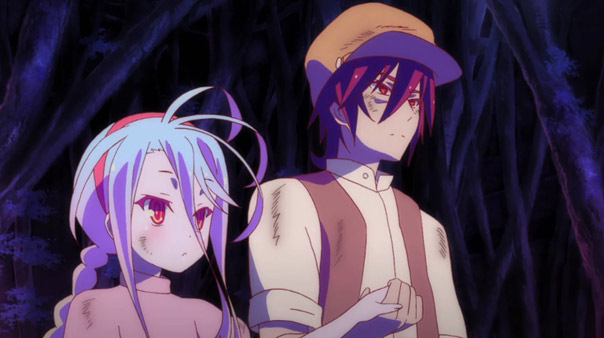 While Steph’s string of consecutive losses to Blank in supposed games of chance forces her to act the goat (or rather, the dog)—and a very skimpily-clad one at that—it’s revealed she’s not as much of an idiot (or a “steph”) as Sora and Shiro thought. Before they arrived on the scene and after when they researched in seclusion, she was ruling Elkia, gathering support for their reforms and neutralizing the opposition. When it comes to Imanity (the ones not being supported by outside nations), she’s done pretty well. 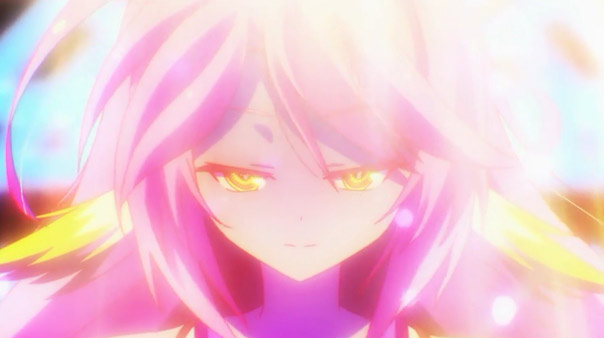 What she hasn’t been able to do is regain any of her country’s lost territory, and that’s where Sora and Shiro come in. Sora first targets the Warbeasts (or “Animal Girls”, even though there are guys) for conquest; a gutsy move considering their vast land holdings and ability to read minds, nullifying strategy and bluffs in any games. However, Steph happens to have a “Flugel” up her sleeve (convenient, that) who could help them in the coming fight, which will most likely be seasoned with more rapid-fire, spaghetti-on-the-wall comedy.

Oh, one more thing: the Castle In the Sky reference was most appreciated. 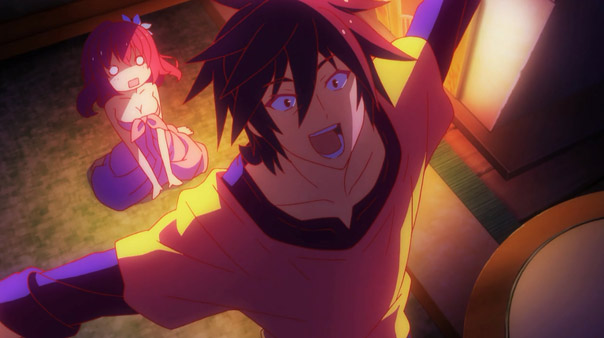 Rock-Paper-Scissors is a very simple game, and a lot of psychology goes into its play. Stephanie Dora loses because she gets lost in analysis of her own strategy, and doesn’t consider the fact that Sora has a pretty good idea what it is. She fails to figure out that he had it all figured out, and loses. But the win isn’t particularly impressive (and Steph’s inner strategizing goes on a bit too long for my taste), because as Sora says: there was no way she was going to win; she’s just too emotional and easily riled.

She was also coming off a fresh and devastating loss to Kurami and wearing nothing but a sheet over her panties, which couldn’t have helped her confidence. Sora may not have gotten a challenge, but he didn’t want one: he merely used a bet with Steph to test the power of the ten pledges. When he commands her to fall in love with him, she falls under his spell, but only intermittently. I liked the idea of the pledges being that ironclad, but it stumbled a bit in execution, Steph’s constant smashing of her head against things in an effort to shake off the spell got a little old after a while.

That being said, I appreciated the manic energy both Hisaka Yoko and Matsuoka Yoshitsugu brough to Steph and Sora, respectively. Lest we forget, Sora’s not a normal human being, nor is Shiro; a point beautifully reinforced when they grow too far apart from one another. That intense co-dependence may make a future romantic pairing between Sora and Steph a bit tricky, but on the flipside, their absolute trust in one another makes them such a powerful gaming duo, Steph starts to believe they could be the key to saving the kingdom of humanity. More to the point, Sora’s thinking big, aiming squarely at the throne.

I wasn’t planning on watching this as I’ve never heard of it, but that seems to happen about once a season here at RABUJOI. Unlike WizBar, I’ve caught this right at the beginning. If every episode hence appoaches being as good as this first one, this could be a hell of a show. Here’s hoping this doesn’t crash and burn in the production values department in episode 11, too, because the visuals rock.

The show stars Sora and Shiro, a brother-sister pair of NEET shut-ins (or hikikomori) who are as otherworldly good at gaming as they are otherworldly bad at living in the real world (or caring about it, for that matter). The visuals establish their primacy right from the get-go: the outside world is bright, bleak, washed-out; the Lain-like interior (no coolant pools though) of the siblings is dark, but far more vivid in hue.

They already have one foot out of the world they were born into, defeating 1200 elite MMORPG players while controlling only four mid-level players themselves, when they’re contacted by a stranger who knows far more about them than they should. This isn’t Heartbleed at work though, it’s Tet, the god of the world where Sora and Shiro truly belong: a world of games called Disboard. There’s a great sense of wonder and adventure as we’re suddenly thrust into that new world along with them; ending up 10,000 meters above it.

As Sora remarks, when a protagonist often finds himself in a new world, stories tend to depict that person’s return home. But this world feels more like home to them than the old one; right down to the color scheme. They waste no time putting their not inconsiderable gaming skills to good use, procuring supplies, cash, and a room with ease, and analyzing a game between players vying to become the next King of the world.

This episode was an energetic,000 snazzy trip from start to finish, wasting no time getting Sora and Shiro out of one world, into the next, and into the thick of the action. While there was a glut of world-specific info for me to process (including Tet’s “ten commandments”), the show kept my eyes nice and busy while dispensing it, helping the necessarily medicine go down. My ears were also treated to the best soundtrack so far; broody and ethereal and brash and booming depending on the situation.

While Sora and Shiro are cocky and successful now (and would dismiss charges of beginner’s luck), things will really get interesting for me when they face off with a worthy or possibly even superior opponent. I look forward to that, and to the episodes with this pair of siblings being more than three minutes long, and containing no brother flesh-eating!