Another week, another episode with more questions than answers. More than once I conjured in my head those words from Alice in Wonderland: Curiouser and curiouser. There is so much that is curious and suspicious about this whole situation.

Saikawa and Moe explore Magata Shiki’s quarters and find quite a few more clues with which they start to piece together a narrative, sticking with practical matters like how the killer dismembered Shiki, stuffer her limbs down the garbage chute, cleaned up the quarters, and got to the roof to kill Shindo in the helicopter.

But with each new strange discovery they have to amend their working theory, while remaining ignorant to the identity of the one whose actions they’re trying to construct. On her PC, Shiki left three separate notes of farewell and good luck, one of which states the show’s title, “Everything is F”…in lieu of Wonderland’s “Eat Me” or “Drink Me.” But there’s nothing else on the hard drives, just the latest version of Red Magic – two whole versions beyond what the staff had.

The night turns to morning, but there’s no way to know with no windows in the quarters, as if they’d either abandoned by or released from time, depending on who you talk to. As Moe inhabits the space where Shiki once sat and talked to her via video conference,  talking about Shiki’s wedding dress, Saikawa recalls a dress Moe used to wear when she was young, that made her look like a doll.

Dolls are both unfettered by time (as they do not age) and by conventional existence (they lack free will, and can only be manipulated by outside forces). Shiki seems to have built a robot: a kind of doll that thinks and moves on its own, but for a seemingly very limited purpose (locking or unlocking her bedroom door). And I can’t overlook the fact parallels are being drawn between Shiki and Moe, not just in their doll phases, but the fact both lost their parents when they were young.

The show returns to the past with Shindo in a room with a young Shiki who wants him to touch her, after carrying on conversations between herself and her other personalities. Shindo appears flabbergasted and ashamed, but somehow powerless to cease this strange, alarmingly bright young woman’s whims. He says he’s “falling down a slope”, just as Alice went down a rabbit hole into a completely different world.

And at the end of the day, everything Moe and Saikawa find themselves tangled in that same world. It’s Shiki’s world, and they’re just living in it. She was presented as a doll on a robotic cart, and even before that seemed to invite manipulation from others like Shindo. But the good professor and his bright young protege could now be dolls under her control. Furthermore, she may not be fully gone; though her body is dead, Mahiru and Red Magic Version 6.0 invite so many intriguing possibilities. 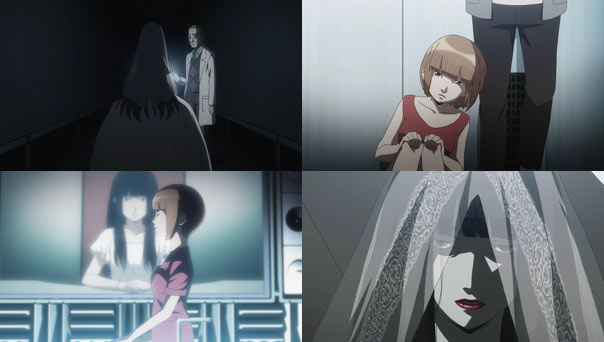 I went into this episode hoping for some answers but prepared for more questions, and got both. First, the indisputable answers: the figure in the wedding dress on the robotic cart is, in fact Magata Shiki. Magata Shiki is dead, and because her arms and legs were amputated, someone murdered her.

The rest—how she was murdered when no one went in her room, nor did she ever leave, in fifteen years—remains, well, a mystery. To say nothing of the identity and motive of the killer. 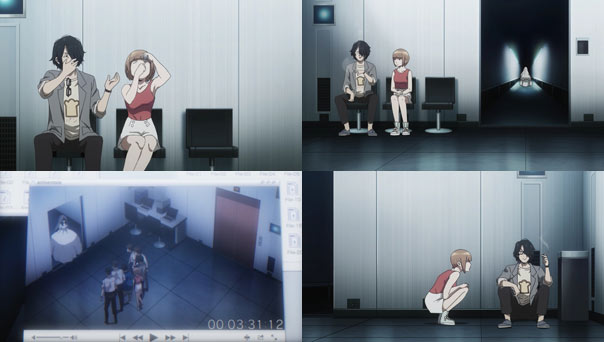 As a result of encountering Shiki’s delimbed corpse, everyone, including Saikawa and Moe, are in a bit of shock; not knowing quite how they feel, let alone how they should feel. But Saikawa and Moe are also two uncommonly smart cookies, so they soon find a bit of solace from the horror before them in trying to unravel the mystery that comes with it.

The geography of the room and its apertures (one big, one small); the impeccably-kept surveillance tapes spanning a decade and a half (they didn’t rewind-and-reuse, like convenience stores); the custom security system called “Red Magic” that is so flawless, last week’s error seems planned; there’s a lot to sift through, and Saikawa attempts to do so; sucking down cigarette after cigarette in the process.

Then Director Shindo arrives on the island via helicopter with Shiki’s younger (but notably more adult-looking) sister Miki, who is shocked to learn Shiki is dead. Moe, while going over in her head the part of her video conversation with Shiki relating to her feelings for Saikawa, thinks it somewhat coincidental that Miki, the last surviving Magata, should arrive around the same time her sister is found dead and mutilated.

For the record, we also learn how Moe met Saikawa (when she was a fifth grader) and why she developed feelings for him (he was the first adult she ever met who was smarter than her). The implication is, her towering intellect had made her hunger for stimulation; for a challenge.

While she initially hated Saikawa for being smarter, she clearly now sees him as a means for her to exercise her intellect. He expanded her humdrum world, by doing nothing at all but existing. 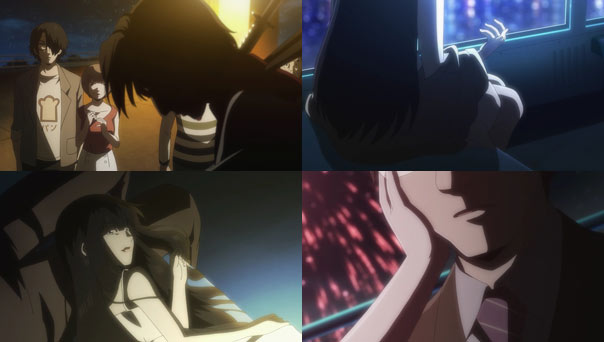 It seems like Moe is about to mention something about her (deceased) parents, but Saikawa is concerned with how late Shindo is; when they return to the helipad, they find him dead from a knife to the back of the neck. It’s another surefire murder,  and just as Shiki never left her room, he never left the helicopter cockpit, and only used thumbs-up from inside. Perhaps the killer was there all along. But then what’s Mika’s part in all this?

Even more intriguing—and more than a little, well, wrong—is another monologue by the director accompanying another flashback (the one in the car last week was indeed a flashback involving a younger Shiki). This past Shiki is confirmed as only thirteen, but as he puts it, it’s “a long thirteen years”, in which she absorbed and retained everything she possibly could, and now wanted to “lose” something…which is pretty heavily implied to be her virginity.

It was up to Shindo, the adult in this situation, to put a stop to whatever was going on in the car and Ferris Wheel, but for various reasons, he couldn’t. Now both he and Shiki are dead; murdered…by who? How? Why? We’ll need quite a bit more ‘expository dialogue’ to find out.