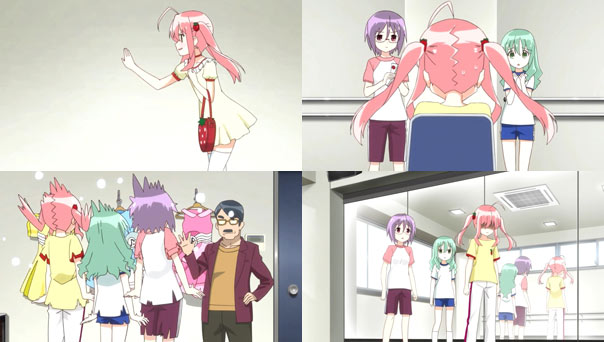 Ichigo’s foot is hurt, and though she tries to hide it, both Futaba and Rin know it’s hurt. The success of the concert is in jeopardy, but both of them care more about her health. Ichigo, not wanting to let everyone down, assures her she can do it, and makes the others promise not to tell Kaibara. Her foot, her terms, it would seem. 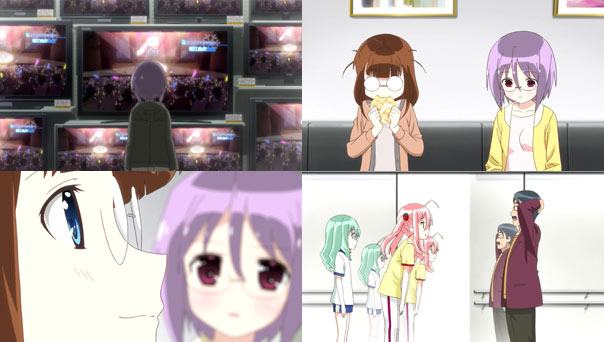 However, after watching Hocchan on TV and bumping into her at the studio (not recognizing her at first because of her disheveled off-stage appearance), Futaba gets yet another invaluable piece of advice, this time about units: everything is shared amongst everyone, be it happiness, hardship, or pain. That means the foot isn’t just Ichigo’s problem and Ichigo’s call, it’s the unit’s. Rin agrees with Futaba, and Ichigo tells Kaibara, who naturally freaks out.

However, the Earphones haven’t gotten this far without overcoming hardship (or lack of natural dancing talent, in Futaba’s case.) So Ichigo gets taped up, and both Rin and Futaba will pick up her slack in the dancing department, rearranging choreography to lessen the strain on Ichigo’s foot, doing a slow song while seated, etc. Konno even finds a clever way to conceal Ichigo’s swollen foot: fuzzy leg warmers!…Which at least to me call to mind the soft padding of earphones.

In order to balance out the proportions of their look (with their $5000 outfits…geez Kaibara!), they also go out wearing bunny ears, and while the first tense few moments after they take the stage they worry they’ll be laughed right back off of it, but the full house of nearly 500 (480 to be exact) end up digging the cuteness.

The trio goes out with everything they have, powered by Futaba’s pre-concert motivational speech that was the culmination of everything she’s learned from working with pros like Hocchan, and while Ichigo stumbles, she doesn’t fall, because Futaba and Rin take hold of her and keep her upright. The unit even gets a call for an encore.

It’s an unforgettable night for the Earphones; far more of a success than any of the girls could have hoped for, especially considering the setback with Ichigo’s foot. But they pulled it off with aplomb, and it was immensely rewarding to watch them do so.