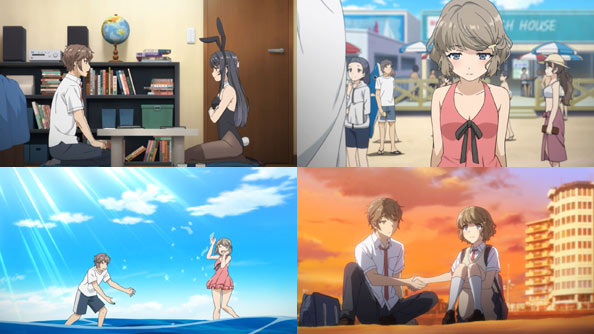 On the eve of finals, Mai decides she’s used enough of the stick and whips out a carrot in the form of her bunny girl suit, which she wears while tutoring Sakuta. Why the change of pace? She witnessed him stand up for Tomoe at the station, and thinks better of him for working so hard even for a fake girlfriend. I can’t tell you how refreshing it is that Mai isn’t the slightest bit threatened by Tomoe.

The finals come and go, as does the last day of school and the start of summer break: July 18. Sakuta and Tomoe have been dating three weeks now, but Tomoe assures him she has an ironclad plan for the breakup. After a fun final date at the beach, she shakes his hand and thanks him for his help. She’ll simply tell her friends she dumped him when she realized he only had feelings for Mai—something that happens to be true.

But I knew, after that “final” date, there was no way July 19 would come. Instead, July 18 resets, as I predicted. What I didn’t expect was that Tomoe isn’t aware of the reset…or at least says she isn’t. They go on their beach date a second, then a third time.

Sakuta starts to suspect Tomoe may be lying about not knowing about the looping. It’s confirmed when she turns around and smiles at him during the principal’s address; something she hadn’t done in previous iterations. Not only does Sakuta know for sure that she’s lying, but he knows why. 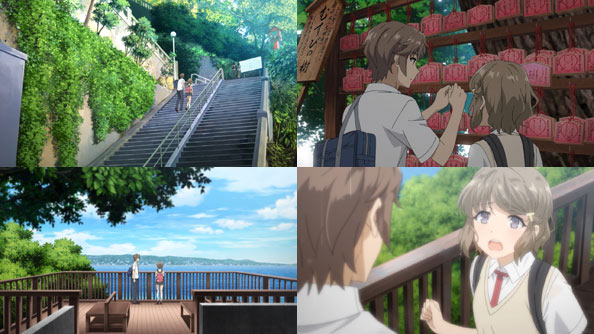 On the fourth July 18 Sakuta throws Tomoe for a loop (for a change), taking her to Enoshima, the place they were originally going to go on their first date, but he’s making it their last. They climb the prodigious stairs to the shrine, and he fills out a votive tablet for good relationships. Tomoe thinks it sinful, since their relationship isn’t real, but he tells her that when they both agreed to do this, they agreed to to it all the way, even to hell.

Moreover, it isn’t sinful for Tomoe, since she’s actually in love with Sakuta. She plays dumb, but once they’re alone on the observation deck, he finally gets her to admit that she’s aware of what she’s doing, and why. Sakuta tells her flat out that whether she repeats time a hundred or a hundred million times, his feelings for Mai won’t change.

Tomoe counters that her feelings have changed. At first, she only meant for the fake relationship to help her save face. But every time she loops, her feelings for Sakuta only keep building up. A stirring monologue ensues, with Touyama Nao effortlessly bringing the feels. Finally, Tomoe does what needs to be done to move on: to stop lying to herself confess her love, clearly and loudly.

The next time Sakuta wakes up, it’s not July 18, or July 19; it’s June 27 (again). Tomoe sent them all the way back to the day she was asked out by the guy her friend likes. This time, she turns him down properly, resolved to face the social consequences…which don’t turn out to be that bad; her friends don’t end up ostracize her. Better still, she can still be good friends with Sakuta, which was always part of her plan.

As for Sakuta, he gets to redo asking Mai out, and she responds just as he’d hoped, as she steals a kiss to express how she feels about him. The next three weeks proceed as they did the last time, with the two differences being Sakuta knows what’s going to happen (even the exam questions) and he and Tomoe aren’t fake dating. They don’t have to.

It was, after all, nought but a simulation of the future, and yet still just as real as the future to come. In her traditional casual science-y explanation, Futaba surmises that Sakuta was drawn into the looping with Tomoe due to “quantum entanglement”, which happens when two particles collide. In this case, Tomoe and Sakuta kicking each other’s butts. Will this show’s delicious cleverness never cease? I for one hope not.

It certainly wastes no time getting the next arc started, as the episode closes with Sakuta meeting a middle school girl who just happens to share the name of his first crush: Makinohara Shouko.