When the second school term begins in September, Sakuta just can’t wait to see Mai. Due to the dating ban and her busy schedule he’s seen neither hide nor tail of her, and that trend continues when she fails to show up to school.

When he finally does happen upon her on a random street, there’s something…off about her. She claims to not know who Sakuta is. Then a short blonde girl appears, telling him she’s the real Mai, and that she and her half-sister Toyohama Nodoka have swapped bodies.

This happened quite suddenly after Nodoka ran away from home and her domineering mother (she and Mai have the same dad) and spent the night at Mai’s impressive, self-bought condo. When they woke up, they were switched.

This is clearly adolescence syndrome, but while the cause becomes clear enough—Nodoka has a lot of built-up resentment for her “perfect” big sis—the means to undo the swap remain elusive, short of propelling Nodoka to the top of the idol charts (something most likely beyond Sakuta’s abilities).

So the two carry on in each others’ lives, trying not to draw to much attention. The fact that Mai’s schedule is comparatively paltry compared to Nodoka’s not only speaks to how hard Nodoka’s mom is pushing her to succeed, but Mai’s desire to have as much time to hang out with Sakuta as possible during the second term.

Despite not having a perfect big sister, Sakuta diagnoses Nodoka’s issues pretty easily, leading to Nodoka confronting Mai and telling her things she’s kept inside, hoping honesty might be a step towards undoing the swap. Instead, Mai shoots her negative emotions regarding Nodoka right back at her. 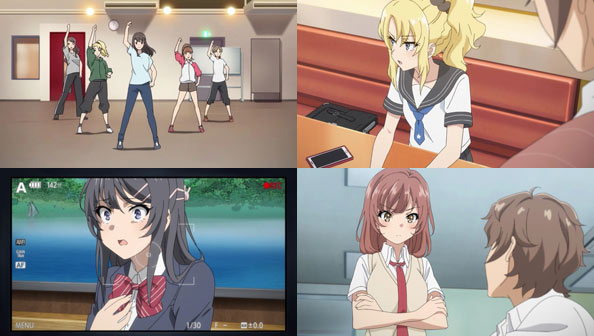 While it’s not immediately clear from the montage of Mai and Nodoka’s days as one another is just how much easier Mai is able to slip into her little sister’s life, doing the necessary singing, dancing, and training required of a rising idol and purporting herself well.

Nodoka does alright with the photo shoots and interviews—things she’s done before—but when it comes time to film a commercial and memorize lines when a camera is rolling and an entire crew is surrounding her…it’s too much. She hyperventilates and the shoot has to be cancelled. When Sakuta reports the incident, Mai is surprised; she figured Nodoka would have been able to get a good take from that particular director.

Being somewhat out of his element with regards to younger siblings, Sakuta gets some insight from the most unlikely of sources: Kunimi’s girlfriend, Kumisato, who like Nodoka, has a hardworking, overachieving, brilliant, perfect big sister (I assume she’s pretty too).

Kumisato neither likes nor hates her, because it’s nothing that simple. What she can say is that she’s always annoyed by her mom’s constant urging that she take her sister as an example and study more. 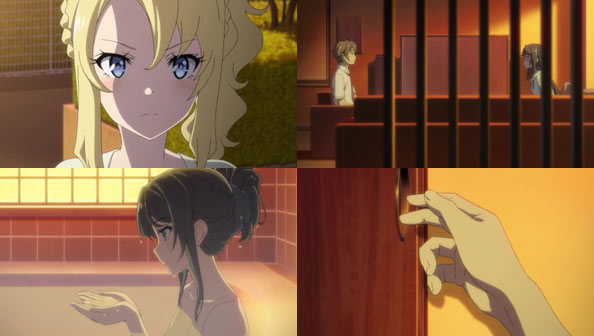 Being a middle child myself, I can state that there was always the push-pull of wanting to set a good example for my little sis while not falling too far behind my big bro (who is much more academically inclined than me…not to mention more historically and politically informed. I can paint way better though!) But my siblings and I aren’t competing in the same field, so we never really competed the way Mai and Nodoka seem to be.

More importantly, we had parents who pushed us to be the best individuals we could be; we weren’t used as pawns in a proxy war between our mothers (for one thing, we all had the same mother, but still). I have no doubt a part of Nodoka is proud of her half-sis, and a part of Mai is happy to have a younger sister to inspire and support. But their folks have not made it easy for them to interact with each other on their own terms.

Body-swap episodes seem to be a dime a dozen these days, but I’ll admit to being a big fan of them when they’re well-executed, as this one is. It’s nice to hear Seto Asami switch up her voice style to match the Nodoka in Mai’s body, not to mention Uchida Maaya’s more upright measure as Mai in Nodoka’s body. The fact they are swapped, and the novelty therein, is secondary to why the swap occurred, as well as how to undo it, which, as with the other solutions to adolescence syndrome outbreaks, will require character growth to achieve.

But my main gripe with this arc is that I found it hard to garner as much enthusiasm as I did for the previous ones. Perhaps that’s due in part to the brisk, sudden manner in which Nodoka is introduced, and the fact the only time we saw her in her own body was in that brief TV interview with her idol group. Futaba, who interacted plenty with Sakuta prior to her own arc, is thus proving a tough act to follow for Nodoka, who entered this episode a virtual unknown.