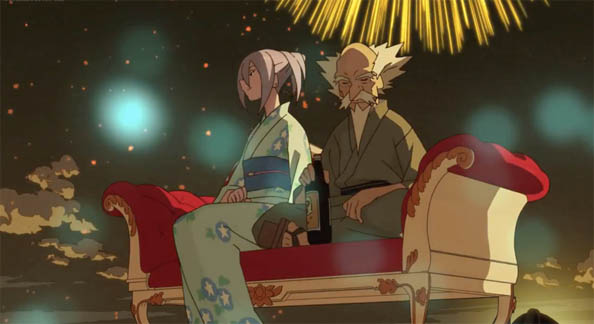 If I had to pick a single episode from last season that sold me on Uchouten Kazoku’s magical setting and ability to project care free fun, it would be the flying tea house battle. While I have mixed feelings about this season’s episode being about the same thing, there is no doubt that the format works tremendously well. The event pulls many characters into one space, the inevitable fight between Yasaburou and Kinkaku and Ginkaku provides enjoyably silly action, and fireworks (and flight) make for a lovely background for many introspective and contemplative scenes.

In many ways, the festival and action is secondary to a great deal of character development. While Sensei has always shown a soft spot for the tenuki (under his gruff old man treatment) this week puts him at the center of their lives as a wise figure deserving of the respect they always show him. Simply, he makes the older siblings get over their hesitation and confess their affections for each other. It’s gruff but also kind, and includes a brief telling that he did this for Yasa’s parents too. Cast in the warm light of the train car, surrounded by food and family, its a lovely scenes.

Speaking of the train, it was great to see Yajiro’s ability to change into a train looped back to. Not only is it great to see a throw away joke pay off, but it gives Yajiro a vehicle to participate in the narrative when he otherwise would be restricted to the well.

It was also a good choice to have Yajiro totally screw up the beginning of the event, by blasting off too quickly and spilling much of the meal inside his belly. Nothing really goes right for the tenuki. Not even when they are trying to be classy or show their power. It’s a great reminder of their place in the pecking order.

But the big loud emotional turn was Benten’s fight with Nadaime. Having stolen his couch for her own amusement and having never had anyone stand up to her, Benten really went into this with a target painted on her back. Yasaburou even remarks that he knew she would lose the second she lunged at Nadaime. (and it was foreshadowed by the mid episode card, showing ‘where Benten fell’ on the city map)

And as loud as that short fight was, Uchouten Kazoku immediately returns to the quiet, tender, introspection it does so well. Yasaburou and Sensei go to find where Benten has landed and sensei gives her a stern but fatherly speaking to. You are angry. Use it to get stronger. That is all.

The Verdict: Finally, a must watch week! It loops so many threads in together and it does so elegantly. So elegantly I’m not even sure I can put my finger on any one character dominating the story. So elegantly that I’m not sure there really is a antagonist in a traditional sense, as Benten is as much at fault (if not more) than Nadaime. (and in his own way, Nadaime is a far nicer person than she)

The formula is setting in, too, with a repeat of last week’s fake-out ending conflict opening as a non-conflict. (Everyone sucked into the Shoji board just ends up in sensei’s closet) While a strict formula isn’t necessary for a good show (or even good for most shows) having a rhythm is, and that was something Uchouten Kazoku has been sorely lacking.