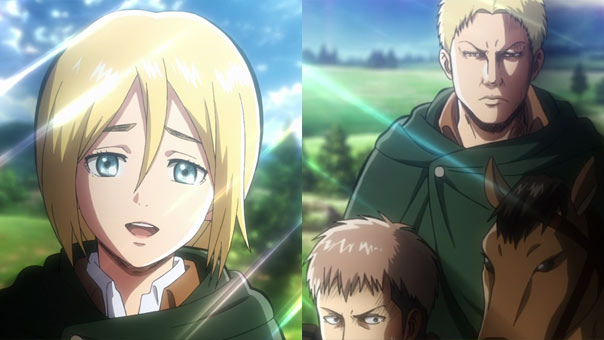 A survival crisis crops up when Armin, Jean, and Reiner are stuck in an exposed area with only one horse, and consider leaving someone behind, possibly to die, but Krista Lenz, who happens to be some kind of horse whisperer, rescues the three guys by bringing two horses with her, causing them to fall for their pretty savior right then and there.

That scene is a nice little breather before returning to the dilemmas at hand: the formation is off course and being torn to smithereens by the Female Titan, who continues to repel any scout attack against her, displaying intelligence and creativity even most elites have never seen.

The show’s penchant for dark humor is amplified when she spins one poor soldier around like a stone in a sling, before apathetically letting him loose behind her. I was waiting for the awful crunching sound of the guy hitting the ground,but we were spared.

Ultimately, the She-Titan’s goal is Eren, as Armin deduced from her course. The balance of this episode becomes about Commander Erwin’s strange orders and how all the lower-downs handle them. He shoots his elite core with Eren into the depths of a forest of really tall trees, which is really cool and looks like a place I’d want to camp were there not Titans around.

In fact, one wonders why humans didn’t just build settlements in the treetops, out of reach of the Titans. I guess there just wouldn’t be time to build, and in any case, the Colossal and Armored Titans would wreak just as much havoc on a forest as on a wall. That doesn’t change my opinion that a tiered tree-city would be cooler than a walled one, but I’ll table that wish in the interests of proceeding with she show we have.

In the show, Jean, Eren, and several others are outright confused by Erwin’s moves, and wish he’d just explain to them what his plan is so that they won’t be so damned jittery. That doesn’t happen; even the elites under Levi’s command look like they have no clue what’s going on. Again, one can hardly blame them; when the She-Titan suddenly appears in the forest and goes after Eren it’s pretty damned frightening.

But neither Erwin nor Levi will tell anyone anything until it’s time to set into motion whatever trap they’ve set for the Female Titan, if that’s indeed what’s going on. Levi simply orders everyone to cover their ears (what about their horses’ reins?) before firing what looks like a flare gun. And that’s where the episode leaves us, on the edge of our seats, wondering what pulling that trigger will do (beyond launching a flare, of course). Fortunately I won’t have to wait a week to find out.

Also…I doubt it’s just me, but isn’t it a bit suspicious that Krista and the She-Titan have the same hair and eyes, and that Krista showed up immediately after the She-Titan disappeared? Probably just a coincidence.