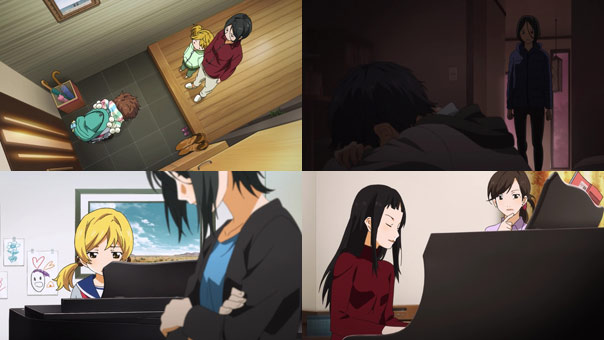 Uso’s second-to-last episode brought back the magic of its sublime first cour, left me bursting with emotions, and moved me to tears. And the cost-cutting we saw in earlier eps? A lot of that was so that we could have this. I’d call it a fair trade.

After Kaori’s latest turn for the worse, Kousei can’t do it anymore. He’s reverted back to the non-piano-playing state he started this show in. Just as Tsubaki cursed music for always taking Kousei away from her, Kousei curses music for taking both his mother and now Kaori, and no one can bring him out from under his cloud.

No one, that is…but Kaori. On a lark, Ryouta visits the hospital and is able to relay a brief letter to Kousei from Kaori:

Kaori is back in her room and seems to be okay, but she’s still very unwell, and initially, Kousei’s spirits aren’t raised one bit by his presence there. Kaori’s casual, nonchalant description of the ICU is as heartbreaking as the increasingly desaturated way her character is colored. But she’s in no mood for Mopey Kousei, and demands he carry her to the rooftop to eat the caneles he brought.

Up there, it’s snowing. Up there, Kousei tells her in his current state he’d need a miracle to be able to play well at the competition. Kaori stands up and gives him a miracle, playing air violin he can hear, which restores color to their colorless world, if only briefly. It’s an achingly gorgeous, bittersweet scene; one of the best the show has done. 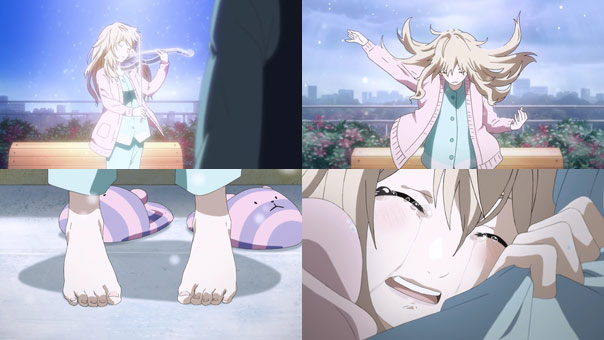 Up there, Kaori tells Kousei, who is worried about ending up along, how scared she is of ending up alone, and how much Arima has meant to her all this time, and how she’s only still alive and struggling as hard as she can because he made her. Nobody says I love you, but it’s hardly necessary; we’re dealing with soul mates here.

Kaori’s words and actions get through to Kousei and the cloud lifts a bit. As she goes under for her risky surgery, he prepares to perform after Takeshi and Emi, who are genuinely concerned for their pale rival’s health, but understand when he repeats the mantra “Gotta play”—because he’s a goddamned Pianist.

He takes the long walk, with all the anticipatory chatter in the crowd, takes his seat on the bench, and freezes, yet again. Is another meltdown in the cards for the Human Metronome? Hardly. He’s snapped back into coherence by a disturbance the most appropriate person.

He’s brought back by Tsubaki’s accidental, and apparently very rude sneeze. That’s right, with all her swirling contempt towards music for keeping Kousei away from her, her body almost acts of its own volition in order to keep Kousei from another disqualification. She reached out to Hiroko (who is at wits’ end) to prevent history from repeating itself with Kousei, but that little sneeze did more than anything Hiroko could in that moment.

Kousei realizes Tsubaki is there, as is Kashiwagi, and Ryouta, and Hiroko, and Nagi, and Miike, and Emi, and Takeshi. He’s not alone, and he’s not going to be alone. He’s up there on that stage thanks to them, as well as Kaori. Whether they’re in the music game or not, they all made their contributions. 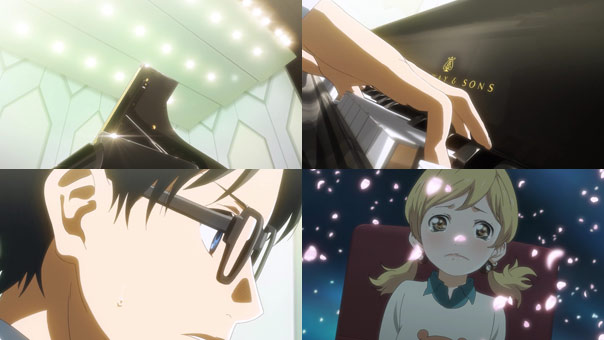 He owes those in the music game even more, perhaps, for pouring their goddamn souls out in order to inspire him to do the same. He can’t let them down. He can’t let us down, either; this is the second-to-last episode and we need a full musical performance, dangit! And we get one: perhaps the most powerful one since he first accompanied Kaori.

It was a much, much better performance than that train wreck, too. This time, none of the commentators are making deductions in their minds or clucking disapproval with his handling of the sheet music. Everyone is simply in awe of the richness and gravitas and intense color and pure heart-exploding sorrow of his rendition of Chopin’s Ballade No. 1 in G Minor, Op. 23. And I was one of them.

But he also may have finally realized that even if he has to say goodbye to Kaori, he won’t suddenly be alone, nor will he suddenly stop being a pianist. And that as long as he’s alive, he’s gotta play.