Tsubaki’s grades continue to improve, thanks to her desire to study hard enough to get into whatever school she wants to, as long as it’s close to her Kousei. Just like years ago when her classmates were amazed the “gorilla” who wore shorts year-round was capable of catching a cold, they’re similarly intrigued that she’s capable of falling in love.

And hey, good for her; she’s not giving up on what she wants, even if she hasn’t figured quite out how to get his attention, or to get him to see her as a girl.

Uso is capable of some seriously powerhouse heartstring-pulling when it wants to, but it also seems committed to drilling certain things into our heads through endless repetition. For instance, how are Watari and Kaori still a thing, while Kousei is the third wheel? How can Kousei look back on all his experiences with Kaori and not think she has some kind of feelings for him? I called Kousei practically everyone’s hero last week, but he seems tragically incapable of saving himself, even though it’s been a long time since Watari’s been anything resembling a threat.

The flashbacks also tend to repeat themselves, though in different ways. Tsubaki always “looked out” for Kousei, but Kousei also looked out for her. It was a reciprocating kinda deal with them, in that whenever one of them was down the other would be ready with lemonade and solace.

Mind you, it’s tough enough believing these middle schoolers are capable of so much emotional complexity and eloquence in the description of their feelings in the present; some of what their grade school versions say to one another strains credulity even more.

Simply put, they’re too young to be talking and thinking like this. It’s more like writers in their twenties and thirties talking through young people, and it can feel hollow and…off. 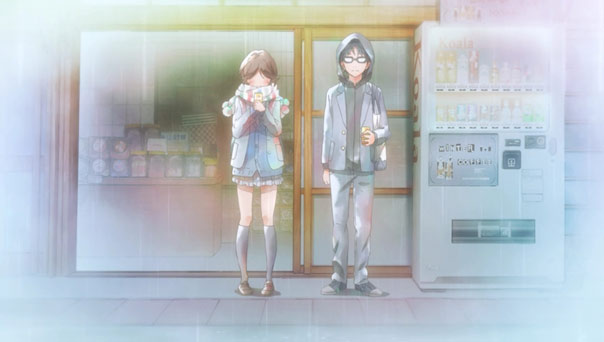 Uso mitigates those persistent issues with some good old-fashioned bombshells this week; two of ’em. First, Tsubaki finally works up the courage to confess…sorta…by insisting to Kousei that Kaori likes Watari, so he has “no choice” but to love her. Then she kicks him as hard as she can in the leg—maybe hoping to literally kickstart him—and runs off at top speed.

Her intention with the love me remark is to make him not only see her as a girl, but to “suffer” just as she has, stuck in her limbo between family, friendship, and romance. For a second there, Kousei seems to react, but he later wonders if she was merely messing around, even if that’s not usually how Tsubaki messes around.

In any case, Kousei is preoccupied with two other things; the upcoming finals that will determine his future, and Kaori, who he’s thinking about not visiting anymore, since she has Watari and all. She calls him to say he doesn’t need to visit, preferring if he’d focus on his music. This pisses him off, but he feels like he may finally have a legitimate way to walk away.

Then she calls him about a plane flying low at night—a plane he can see too, connecting them through the sky. He likens her to a cat; one of which sidles up to him just as Kaori calls him back. Kousei cancels his retreat. He’ll come to visit, because he wants to see her. Kaori, ever the enigma (to him at least), doesn’t respond to that.

Then Watari looks forward to duking it out with Kousei for Kaori’s heart…which, again, I thought had already taken place, and Watari had pretty much lost because he has nothing in common with Kaori besides good looks.

And oh yeah, because The World Is Horrible, just as they’re joking about the fight for Kaori’s heart, they find Kaori fighting for her life among a phalanx of nurses, apparently having some kind of seizure. Kousei sees her hand go limp and fears the worst, but the boys are shooed away so the professionals can work on her.

With just two episodes left, no doubt Kaori will be in an even worse way next time Kousei sees her…if he sees her again at all. In any case, the chances of her performing with him have never looked bleaker.

Oh, wait, and also because The World Is Even More Horrible-er Than All That, the black cat representing Kaori is hit by a car right in front of Kousei. Heck, it could’ve even been his cat Chelsea whom his mom threw out, still prowling the streets as a stray, somehow remembering her old friend. He rushes her to a vet, but there’s nothing they can do. And the tears flowed, because Dead Cat=Possibly Dead Kaori. Did I mention Where I Don’t Want To Live Anymore?

Yikes. This is a lot for a bunch of eighth graders to go through, isn’t it? This Shigatsu wa Kimi no Uso shit’s gettin’ way too dark. When is this show going to let someone be happy for more than a couple minutes before something croaks? We’ll see if the ultimate lesson of Uso will be “Whenever you spot a skinny blonde playing the recorder in a playground, run the other way and marry your childhood friend.”