I find stories involving time travel, particularly stories in which the motivation to use time is to save a doomed loved one, compelling by nature. The simple human concept of there being one person for everyone makes the hard-edged sci-fi elements go down more easily for us humans. And if it wasn’t clear by now, Sou believes Kaori is the only one for him. 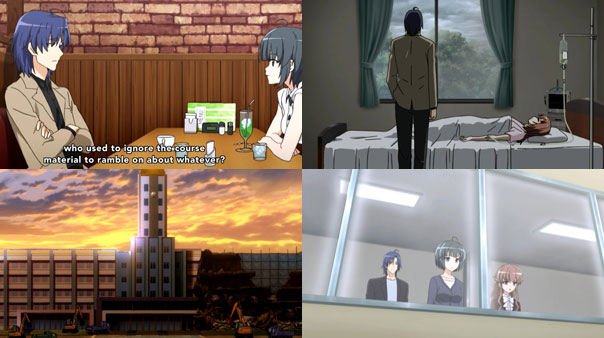 However, balancing the technobabble with the ease of emotional connection is not an easy task, and the formula is very precise. This episode is a classic case of having to breathlessly compress so much science and plot into one episode, there is virtually no room left for emotional rests. It doesn’t help that a lot of what goes on is narrated to us by Sou.

I’ll elaborate on that. Unlike any previous WareMete episode, this one spans many years, documenting the events immediately after Kaori’s accident, which doesn’t result in her death, but rather a coma from which she simply won’t wake up. Those early scenes of Sou sitting wordlessly in her hospital room are the most effective, emotionally speaking. 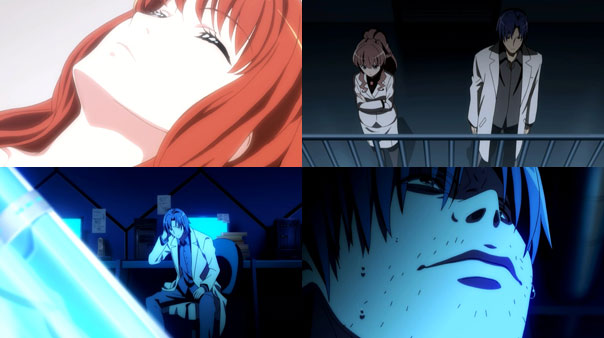 But this an ambitious episode that intends to cover a lot of ground, both because Sou has to become that grizzled fellow Yui remembered a couple episodes back, and because the kind of sophisticated, barely even theoretically possible work that needs to be done, requires years to do.

But precisely because so much time passes in so little running time, covering so much plot, the characters are badly neglected, and feel like they’re standing still. Perhaps that’s the intention: that this is a timeline in which the personal lives of the remaining astronomy club members (sans Kenny, but honestly who cares about Kenny) are essentially sacrificed to finding a way to revive Kaori.

I buy that Sou has no other life, but not the others. This episode’s goal, perhaps, was to get the presentation of this morose “post-bad ending” timeline over with as quickly as possible, as it’s not the timeline that would have happened had Yui successfully saved Kaori. Perhaps a “good ending” really is still in reach.

But still, an endiing is what one makes of it. After Kaori’s accident, Sou put everything he had into saving her. Just as the episode neglected characters in order to orient everyone to the point when Yui (who we learn may possess a speck of Kaori’s personality) is sent back to the past, Sou neglects Airi throughout the timeline. She’s always by his side helping and supporting, but his gaze never meets her; it’s perpetually pointed backward.

I won’t say this episode was a total waste, because there were facts we needed to learn, yet I can’t deny its essential nature as a more-redundant-than-no plot-dump that did the characters no favors. I could complain that it felt too rushed, but a part of me is glad the show only spend one episode on this timeline, ending with Past Sou finding Yui, completing the time paradox and creating the possibility that things could go differently this time. Whether they’ll go differently enough to save Kaori is anyone’s guess.