The day of the big debate is here, and while Tenchi gives Momo some last-minute encouragement (without picking a side), he gets a flash of past young Momo wearing vintage garb when they shake hands, as Momo tells him she feels like he’s always been there protecting her. Probably because I guess he technically has! 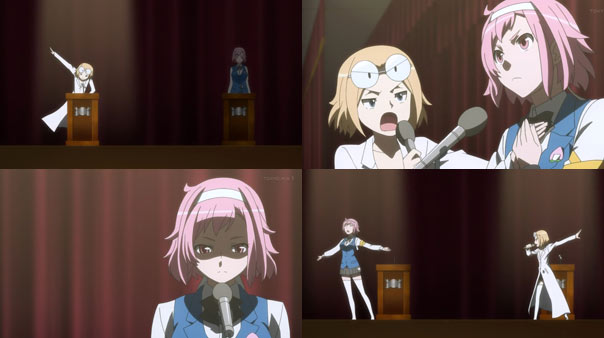 With the live polling numbers displayed above the stage showing Momo and Yuki exactly tied, this is both their time to grab the lead. Yuki starts off with flashy poses and promises both she and the voters probably know she can’t keep.

Then she brings up the newspaper scandal she cooked up, which proves to be a critical mistake, because Momo turns it around and delivers a monologue about how everything comes from love, so there’s nothing wrong with showing it. 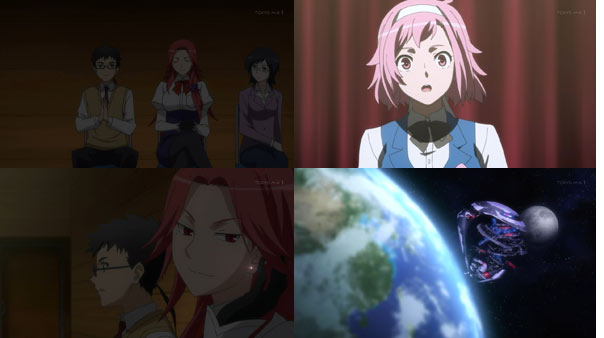 The speech isn’t that sophisticated, and she completely skirts over things like inappropriate underage relations, but that’s not what’s going on between her and Tenchi anyway, and she’s so earnest and cute she wins the crowd over immediately, leaving Yuki looking like a steaming stick-in-the-mud.

Victory seems well in hand for Momo…until her entire body seems to shimmer in and out of cohesion, Kurihara’s earring glows, and that huge spaceship we saw a few eps back appears in Earth orbit. Looks like they’ve come for the ‘temporal fugitive(s).’

As expected, Tenchi gets pulled from a gaggle of student reporters (why are there so many?) into the faculty lounge, where Kurihara seems primed to administer some lashes with her whip. She doesn’t really care if the rumors are true; the mere fact an article was published at all compromises his position in the school. And she did warn him not to get too close to the students…many times. 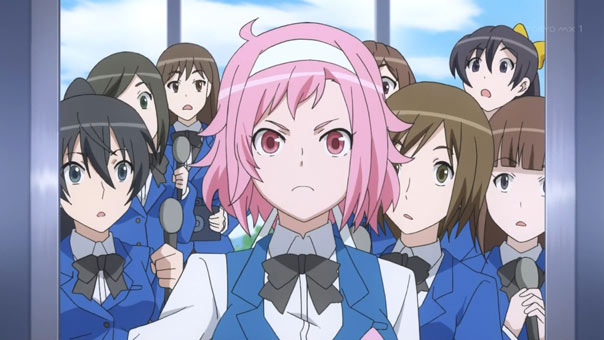 It looks bad for Tenchi, until a determined, true-with-it Momo enters the lounge defiantly and confirms she’s the student in the picture, opening herself up for disciplinary action. But it isn’t anything out of character for Momo. She’s all about helping people, and right now Tenchi is the one in a bind.

The perpetually sandal-wearing Prez goes face-to-face with Kurihara and explains her position: accident or not and regardless of their positions in the school, there was nothing wrong with what she and Tenchi did. Impressed by her chutzpah, Kurihara agrees to drop the matter…but only if Momo wins the election.

Momo reflects on the roof with Tenchi. As a person who understands her own undeniable charisma and power to bring people together – even people who’d normally be enemies – Momo wants to remain in the spotlight so everyone who needs to can see her and feed off of her light and positive energy. Tenchi cheers her up and gets her pumped for what is sure to be an animated and fierce debate with Yuki. 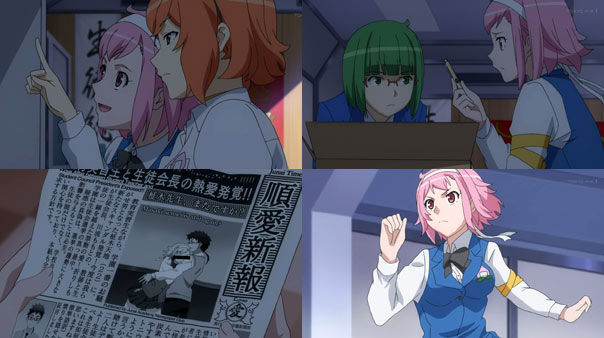 For the first time in a while on ATM!, three minutes still felt too long for what we got this time. Most of it is just Momo, Touri, Hana in the dark council room looking through all the illicit electoral cheating paraphernalia confiscated from the Fuka campaign, a scene that drags. Yeah, we get it, Yuki is a trickster!

The episodelet does redeem itself somewhat when Hachiko arrives with a newspaper not published by the newspaper club with a big spread about an affair between Momo and Tenchi, which is ridiculous for anyone who’s watched the two interact in context, but out of context is pretty convincing to the average student.

I just wish they’d gone further, having incriminating photos of every out-of-context instance in which Momo and Tenchi ended up close and personal, since there are a lot of them; enough to create enough of a misunderstanding to get Tenchi canned, to be sure.

The newspaper makes the paraphernalia look like a distraction for the council, and shows that Yuki is serious about winning at any cost, even hurting Tenchi. It also looks like Momo is going to try to convince the school administration (read: Kurihara) that Tenchi is innocent, but will her pleas fall on deaf ears?