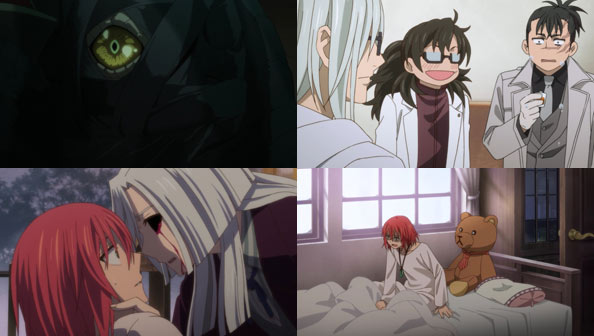 We jump from a cold open in which Cartiphilus’ smirks while one of the poached dragons is being dissected as they cry “please stop” and “I want to go home”, to a scene at the college where it’s revealed Renfred is a weepy drunk.

Methinks the composer is a bit too proud of his slide whistle “comedy” theme. The tonal shift is clunky to say the least. Things swing back from jocular to dark when Chise has a very disturbing dream involving an amnesiac Cartaphilus in London. 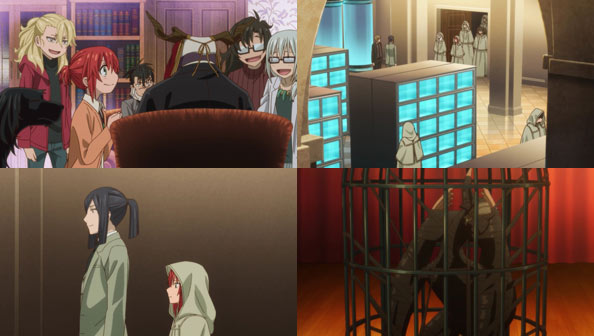 She awakens to find Alice, Renfred, the Selkie, as well as several members of the “College” she knows nothing about (nor do we) hanging out with Elias in the sitting rom. The College members range from tolerable (Adolf) to embarrassingly awful (Tory). They inform Chise that two dragons have been poached and they’ve come seeking help from her and Elias.

Elias refuses, properly citing Chise’s fragility, but Chise overrules him, and before you know it, we’re back at the underworld auction house where Chise gave herself up to be sold to the highest bidder; one of the dragons is on the block. The man who arranged for Chise’s sale, Seth, gives Chise a checkbook and card tied to a account containing half of the value of her sale, since she was technically her own seller.

It’s strange that she didn’t have access to this cash until now, when she may have to spend it all bidding on the dragon. At least Seth seems pleased that since last they met Chise has become someone who actually, you know, wants to live.

Buying the dragon’s freedom in the auction seems like the College and Chise’s play, and the two combined would seem to have enough to do so, but things (predictably) go pear-shaped when the dragon goes berserk, breaks free from its physical and magical binds, and starts breathing fire.

Chise can sense the dragon’s emotions—its scared and wants to go home—but it might be too late to reason with it. Who the woman is who whispered in Chise’s ear, and what Cartaphilus’ convoluted plan is this time (if he even has one) remain unclear. I just hope this doesn’t all end with Chise yet again coughing up a couple liters of blood…followed by more slide whistle.