As Andrew sees a worsening situation with the soccer-fueled civil unrest, Chariot decides, at last, that she’s really, truly, definitely going to tell Akko her true identity…only for her only chance in this episode to be interrupted. And by Andrew, no less, via Diana, whom he’s able to contact because of their families. All for a lost hat!

Just as Diana is asking “Ursula” if she knows anything about the greatly increased stores of energy that correspond to the installation of Croix’s SSS system, Chariot spots her rival in the window to give chase. 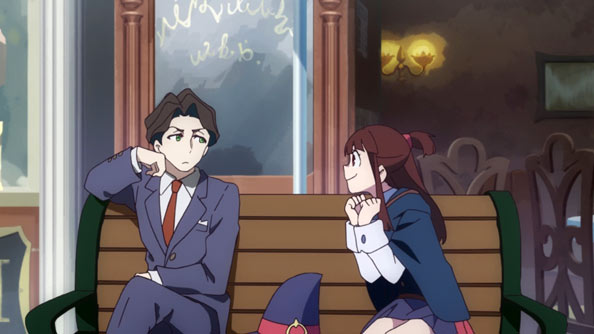 This is an episode that doesn’t waste a lot of time, and its most leisurely scene is also its best because of the wonderful chemistry that has developed between Akko and Andrew.

As someone being told day in day out that his path has already been set for him, and defiance will not be tolerated, an idealistic free spirit like Akko is just the kind of girl he’d fall for, almost envious of her worldview.

He’s become far less dismissive of her flowerly hopeful little speeches, especially in light (or darkness) of the soccer protests. But he makes sure to check Akko’s boundless idealism with the caveat that she herself should be the one to take action, rather than wait for Chariot to swoop in and save the world.

Akko’s in full agreement: she’ll make the world happier and preserve magic with her own hands and heart. In his criticism, Andrew is aware that it applies to him as well. 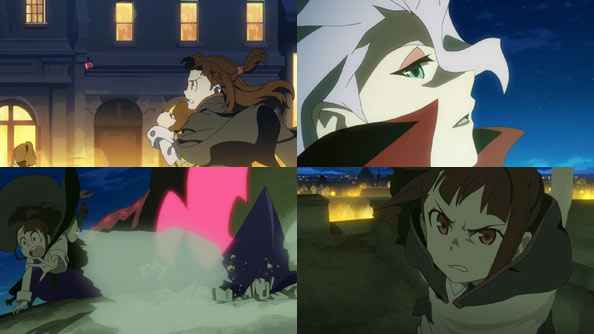 While it’s nice to see Akko and Andrew laughing together and enjoying each other’s company, when duty calls (in the form of one of Croix’s little cube drones), Akko springs into action immediately, leaving her hat behind once more.

That cube leads her to a rooftop where Croix stands, and is all to happy to explain that the cubes are her handiwork, that she’s using “Noir Fuel Spirit” to absorb negative emotions from the people and converting it to magical energy. In effect, she’s saving the magical world, her way.

That way happens to be pretty much the opposite of how Akko would want to save it; by creating positive energy—happiness—and she tells Croix this is flat-out wrong. Croix responds by fusing her drones into a giant monster and attacking Akko with it.

Chariot arrives just in time to save Akko, and destroys the drone-‘dragon’, but in the process lets the cat out of the bag, a cat Croix is all too happy to pounce on. Here Akko finally learns her idol was beside her all along, in Croix’s words, holding her back. And while that might sound like emotional manipulation, it turns out Croix means it literally.

Chariot, it seems, is responsible for sapping Akko of her magic, back when she attended her show. Chariot absorbed dreams, rather than negative energy, to gain magical power. This is why Akko can’t fly; not any lack of effort or perseverance.

Right on the heels of Akko learning Ursula is Chariot, that revelation is a gut punch for poor Akko, who merely shouts about it being all lies before running away. Croix tells Chariot she doubts Akko will be pursuing the words anymore, all but claiming victory in a rivalry in which she deemed Akko Chariot’s proxy.

With the completion of this outing we’re down to three episodes of LWA, at least that we know of, and there’s a lot that needs to happen in some order: Akko regaining her composure and rising to the occasion and gaining sufficient power (be it through the words or through her friends) to foil Croix’s plans for world “reconstruction,” and hell, maybe receive a kiss from our boy ‘Drew.

That’s a lot, but now that LWA has kicked into a higher gear, I’m confident it can deliver on the denouement.