In its more bizarre yet creative outings, Space Dandy has a knack for imbuing abstract concepts with a recognizable specificity in order to tell an conventional story. Last week and this week were both conventional romances, told in completely different ways. Last week Scarlett hired Dandy to pretend to be her boyfriend, then fell for him for real. This week we see one of the “couple hundred or so pasts” Dandy’s had that he’d rather not re-live, in this case a transdimensional love triangle.

The cold open set us up to expect a standard tale of a fire going out in a relationship, but it’s good that we don’t see Catherine in this scene, because it would give away the fact that Catherine is a 4D being represented by a tesseract with a beating cartoon heart at its core, which would have killed the mood a bit, at least at first. In the normal 3D present, neither the cat or the robot get what Dandy ever saw, but Honey understands completely: love is love, and it takes all forms and, apparently, dimensions.

The third member of the triangle is Paul (a simple name for a complex character), who has arrived in the third dimension within his 2D universe, which resembles a full level map from Nintendo Power, which turns anything it touches into 2D. It’s not Dandy who first encounters it, but Dr. Gel and Bea. The Gogol overlords treat it as an invasion, but Gel is a man of science before he’s a man of war, and relishes being transformed into 2D, because he gets to experience the unknown.

It’s interesting then, that what is a total unknown for a venerable scientist is old news for Dandy. It’s just taken on faith that somehow, he entered into a romantic relationship with a 4D woman, without going into detail exactly how that works, because, after all, love is just as inscrutable between 3D lovers. Cathy’s 4D/2D fling with Paul is even more inexplicable, but it doesn’t matter; the dimensions may as well be different countries, and the lovers’ dimensional differences a matter of differences of perspective.

Of course, the concept of a romance “just not working out” is a lot easier to quantify in this story: of course things “just wouldn’t work out” for beings of fundamentally different spacial dimensions! But we still see from the way Dandy treats Cathy that there’s still affection there, even if it’s more of the “just friends” kind. The fact they can still be friends and that Dandy would help Cathy out with Paul goes to show that while their past breakup was painful, it was more an act of evolution than destruction. 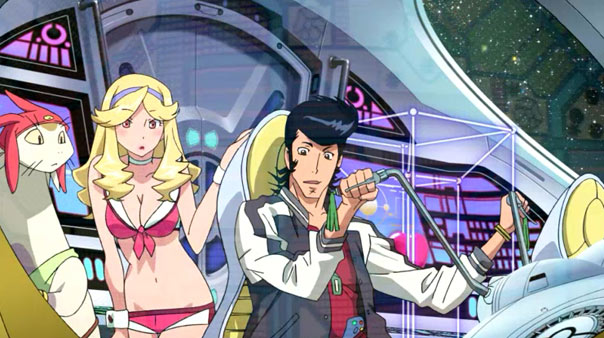 Our heads thus firmly wrapped around the love story, the presentation and mechanics of the clashing dimensions is a lot of fun, as the 2D visuals are accompanied by suitably retro 8-bit sound effects. Several video games are loosely represented in the 2Dverse including Space Invaders, Civ, SimCity and Zelda, and the fact of the universe folding itself up like a newspaper, only to be punched through by the Aloha Oe’s giant scissors (an idea that came from Honey) is another crazy but clever way of the dimensions going at it. Gel and Bea’s eventual devolution into zero dimensions is also funny, if a bit chilling (though I’m sure Gel’s lovin’ every minute of it). 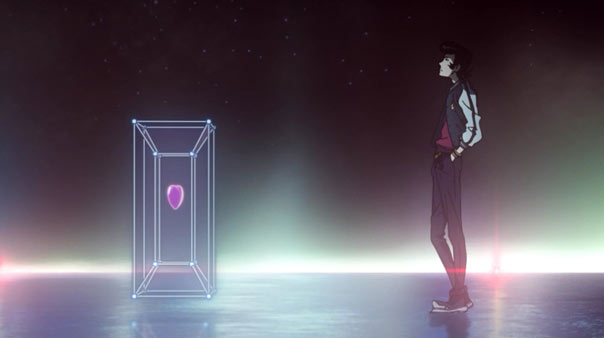 Finally, while Meow and QT often just served as the skeptic and reporter this week, Honey got some nice screen time. Cathy likes how Dandy is now hanging around someone as positive and “spunky” as Honey, while Honey shows off a bit of her self-interest by accompanying the others out of the perceived possibility of scoring with Paul, who is a 2D prince. In the end though, love can’t always overcome looks, as Honey considers Paul’s simple crowned blue rectangle form a deal-breaker.