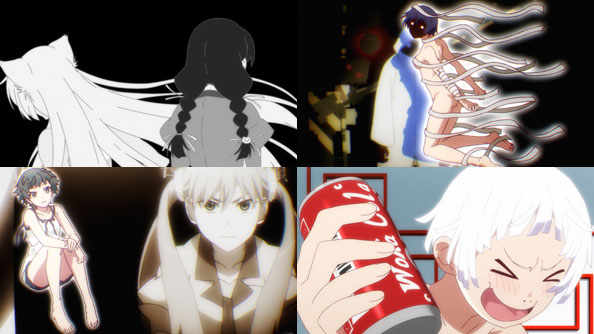 Having met nearly everyone in this “mirror world”, Koyomi takes stock of the different ways the people he knows have changed, and acknowledges that this is far from simply a matter of left becoming right, or even right becoming wrong.

Black Hanekawa is his Tsubasa’s alter ego. Rainy Devil’s hatred lurks within his Kanbaru. The happiness of her alternate dwells deep within his Sodachi. Kuchinawa is an inseparable part of Nadeko. 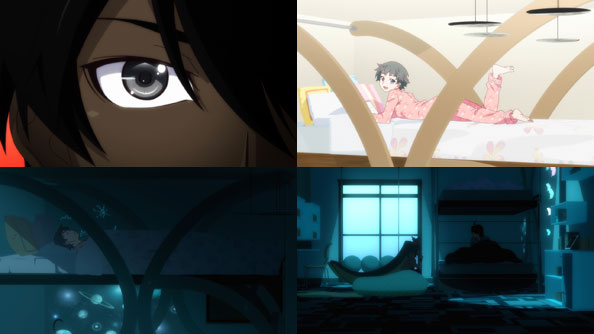 These seemingly different or opposite people are really much the people he knows as the people he knows, only in his world these are the sides hidden, suppressed, lurking beneath the everyday surface, for good and/or ill. As Mayoi has him consider where his alternate might be, he contemplates Oshino Ougi being in his world while he’s here.

But Mayoi also tells him to sleep on it, and take what opportunities might come. To Koyomi’s surprise, Sodachi is his bunkmate, and after lights-out offers some sleepy insight into mirrors—which typically only reflect about 80% of the light that hits them. The rest is absorbed, meaning the only way to truly see ourselves is to see a “blurry reflection”, something less than 100% the reverse of what you put into it. 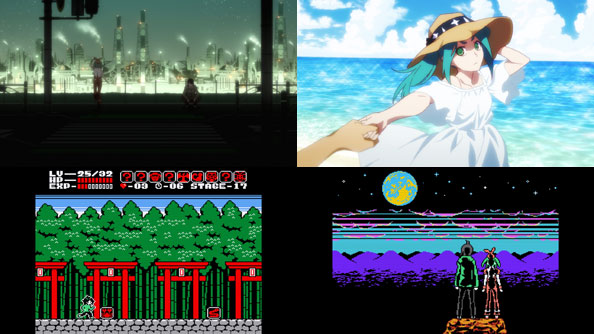 That opportunity Mayoi mentioned might come comes in the form of Ononoki, but there’s something different about her, which is to say there’s something the same about the way she’s supposed to be. Her expressions and emotion and tone are all back to normal.

She reports that when she saw Koyomi’s reaction to her as she was (including not removing her “bottoms” as is supposedly his alternate’s dirty habit), she essentially rebooted and updated her personality—something among all the others she’s uniquely equipped to do.

Ononoki tells Koyomi she’s arranged to have the former Kiss-shot meet with him, and takes him on a journey to see her. I say journey when it’s more of a dazzling odyssey. As she lets the withering insults of her twisted personality fly freely, the surroundings of their trip to Shinobu fluctuate between dreamy hyper-realism to intricate 8-bit nostalgia. 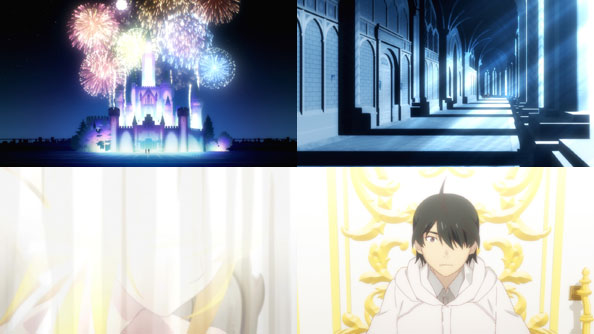 Very few shows excel better at distracting you from long conversations with diverse dynamic visuals and eclectic music. This culminates in the most lavish setting yet: a classic Disney-style castle at the site where Koyomi expects the cram school to be; which he assumed might not have been destroyed by the Tiger like it was last Summer in his world.

As he and Ononoki let themselves into the magnificent edifice and walk through its vast moonlight-bathed halls, he contemplates what kind of person Shinobu might be. Did the other Koyomi never meet her bleeding to death in the subway, and never made a pact to save her life and made him a vampire? Is she Full-Power, Non-Former Kiss-shot and all the rest?

Well, once he enters her ethereal bedchamber, spots her silhouette, and hears her old-fashioned, polite salutations, it dawns on him: she’s not a vampire at all; she’s human. Judging from her castle, perhaps she still goes by the name Princess Rola?

In its more bizarre yet creative outings, Space Dandy has a knack for imbuing abstract concepts with a recognizable specificity in order to tell an conventional story. Last week and this week were both conventional romances, told in completely different ways. Last week Scarlett hired Dandy to pretend to be her boyfriend, then fell for him for real. This week we see one of the “couple hundred or so pasts” Dandy’s had that he’d rather not re-live, in this case a transdimensional love triangle.

The cold open set us up to expect a standard tale of a fire going out in a relationship, but it’s good that we don’t see Catherine in this scene, because it would give away the fact that Catherine is a 4D being represented by a tesseract with a beating cartoon heart at its core, which would have killed the mood a bit, at least at first. In the normal 3D present, neither the cat or the robot get what Dandy ever saw, but Honey understands completely: love is love, and it takes all forms and, apparently, dimensions.

The third member of the triangle is Paul (a simple name for a complex character), who has arrived in the third dimension within his 2D universe, which resembles a full level map from Nintendo Power, which turns anything it touches into 2D. It’s not Dandy who first encounters it, but Dr. Gel and Bea. The Gogol overlords treat it as an invasion, but Gel is a man of science before he’s a man of war, and relishes being transformed into 2D, because he gets to experience the unknown.

It’s interesting then, that what is a total unknown for a venerable scientist is old news for Dandy. It’s just taken on faith that somehow, he entered into a romantic relationship with a 4D woman, without going into detail exactly how that works, because, after all, love is just as inscrutable between 3D lovers. Cathy’s 4D/2D fling with Paul is even more inexplicable, but it doesn’t matter; the dimensions may as well be different countries, and the lovers’ dimensional differences a matter of differences of perspective.

Of course, the concept of a romance “just not working out” is a lot easier to quantify in this story: of course things “just wouldn’t work out” for beings of fundamentally different spacial dimensions! But we still see from the way Dandy treats Cathy that there’s still affection there, even if it’s more of the “just friends” kind. The fact they can still be friends and that Dandy would help Cathy out with Paul goes to show that while their past breakup was painful, it was more an act of evolution than destruction.

Our heads thus firmly wrapped around the love story, the presentation and mechanics of the clashing dimensions is a lot of fun, as the 2D visuals are accompanied by suitably retro 8-bit sound effects. Several video games are loosely represented in the 2Dverse including Space Invaders, Civ, SimCity and Zelda, and the fact of the universe folding itself up like a newspaper, only to be punched through by the Aloha Oe’s giant scissors (an idea that came from Honey) is another crazy but clever way of the dimensions going at it. Gel and Bea’s eventual devolution into zero dimensions is also funny, if a bit chilling (though I’m sure Gel’s lovin’ every minute of it).

Finally, while Meow and QT often just served as the skeptic and reporter this week, Honey got some nice screen time. Cathy likes how Dandy is now hanging around someone as positive and “spunky” as Honey, while Honey shows off a bit of her self-interest by accompanying the others out of the perceived possibility of scoring with Paul, who is a 2D prince. In the end though, love can’t always overcome looks, as Honey considers Paul’s simple crowned blue rectangle form a deal-breaker.