King Gilgamesh comes to Ritsuka and Mash’s dwelling in person because he intends for them to serve as his escorts on a journey to the Persian Gulf to inspect the quality of the water keeping his people alive. Watching Gilgamesh, er, mesh with ordinary citizens on the streets of Uruk softens the pompous bastard a bit.

I also found the streamlining of both the cast and plot effective. Aside from occasional check-ins from Romani and Leo, it’s just Ritsuka, Mash, and Gilgamesh on a road trip with a simple objective. I just wish we could have heard (or seen) some of the adventures with which Ritsuka and Mash regale Gilgamesh.

Gilgamesh has enough personality for the three of them, which is good, because aside from being generally kind, agreeable, and brave, there’s simply not much to Mash, and even less to Ritsuka (which is, of course, by design). The scenes in which Mash voices her doubts and Ritsuka reassures her have become a bit repetitive.

At least this time we actually catch a glimpse of one Francis Drake from the Okeanos Singularity mission, while the gulf coast makes for a very picturesque setting for their little break. It’s a break rudely interrupted by Enkidu screaming in low and hot like a cruise missile from the ocean horizon. 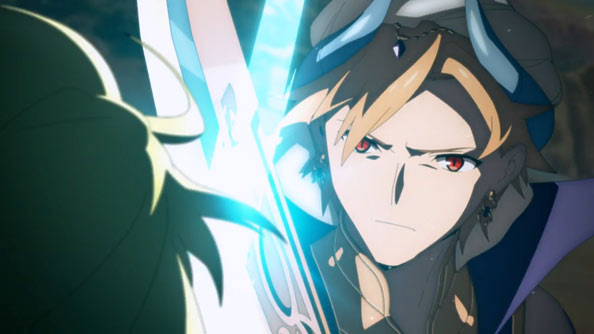 Annoyed that Ritsuka and Mash are taking it so easy, he unleashes a very Gilgamesh-esque attack upon them, with dozens of mini-dimensional portals opening and launching a torrent of blade-tipped chains. Mash is able to block and dodge a few, but eventually ends up a sitting duck, and Ritsuka just manages to shove her away from a killing blow.

Things look grim for a duo, but thankfully they’re not alone, and Gilgamesh has concluded whatever additional business of which they weren’t aware. He’s able to match Enkidu’s frighteningly powerful attacks with some of his own, opening up his treasury to produce a weapon for each of his opponent’s chain-blades.

The two put on quite a show, but ultimately Enkidu misses and hesitates before retreating, as if some of the old Enkidu were still within him. Gilgamesh warns Ritsuka and Mash that if that fake Enkidu truly wanted him dead, he’d be so. Later, Enkidu has to convince himself compulsively that yes, he can indeed kill Gilgamesh…he just couldn’t do it today.