While drinking at the Night Club Rumba, Michiko encounters the exotic dancer Pepe Lima. The next morning, the kids Michiko chased away return and bring her to their boss and owner of the night club, Rico, also Pepe’s lover. Rico makes her pay for one of his kid’s medical bills, and she acquieses. Later, Pepe visits Hatchin’s restaurant and invites her to come to her birthday party at the club, where she’ll tell her about Hiroshi.

As Hatchin gets drunk on juice and Michiko listens skeptically, Pepe tells them about her riches to rags story, and how she’s the only one left to take care of her sister, Lulu, and how she has a plan to escape their plight. After drinking her under the table, Machiko goes home with Hatchin. Pepe and Lulu steal Rico’s money and go on the run, but Lulu goes back for a photo Pepe wants. When she doesn’t return, she begs Michiko for help; Michiko refuses. Pepe’s cab is blocked by Rico’s kids, who open fire on her.

Brazil is massive: 200 million souls and more expansive than the lower 48 states, so there are many other duos like Michiko and Hatchin living within her ample borders, and it was only a matter of time before they ran into one. While they’ll both deny it outwardly, Michiko and Pepe really are alike, though the latter says she’ll trust people while Pepe is originally from money we’re guessing Michiko never saw in her youth. Notably, they also have younger girls to take care of. Pepe and Lulu are a mirror for our heroines, but Michiko ends up breaking that mirror, literally and figuratively.

We were as disappointed with Michiko’s decision as she seemed to be – but if when it comes to survival in the harsh, cruel world, staying out of it was the right choice. Hatchin gets drunk off orange juice, for crying out loud, and while she has a stout heart and will (trying to rescue Michiko was adorable, if foolhardy), a stiff breeze will blow her away. The kids Rico employs may not have great lives, but they have each other and his protection. Hatchin had her awful family, but it was still security, which Michiko took away. As she demonstrates when she pays Rico without a fuss, Michiko’s motto of “keeping things simple” has kept her alive so far; she can’t risk going against it for Pepe, lest Hatchin pay the price. 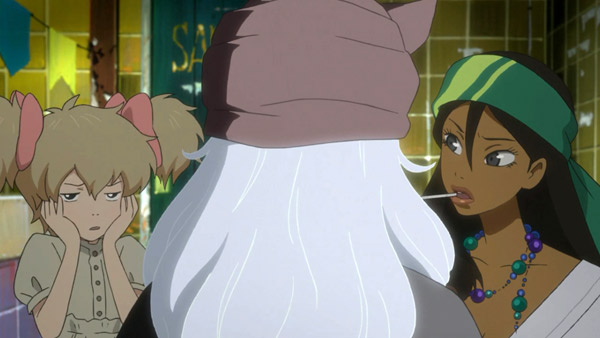 Michiko consults with a fortune teller who gives several prophecies to both her and Hatchin, she also sells a “miracle stone” that Michiko gives an unconvinced Hatchin. When Hatchin steps in dog doo, Michiko steals her a new pair of shoes. Hatchin convinces a Chinese restaurateur to give her a chance. As Michiko asks around for Hiroshi, Hatchin works for free to prove she’s serious. She runs after a dine-and-dasher to his favela (going against the fortune teller’s warnings) and is then chased by his friend with a gun. Cornered, she stuns him with her stone. Michiko arrives to pick her up and scare the others off. They go to the shanty where Michiko believes Hiroshi lives, but when a woman answers the door, Michiko storms off with Hatchin in tow, insisting it wasn’t her dad after all.

After shooting down helicopters riding motorbikes through windows and Rube Goldberg-like police chases through town, this episode is a lot quieter (there are some gunshots, but they’re poorly aimed). Now in a relatively safe place where they don’t have to be in survival mode, Michiko sets about her mission to find her man. It’s charming how much faith she puts in the old lady compared to Hatchin’s naked skepticism, and we knew when she started spouting off vague prophesies in her trance, that the episode would unfold much as she said, only with results different than Michiko and Hatchin interpreted them. We also see that Hatchin is still not ready to lead a life of crime, refusing to wear her shiny new shoes until she’s paid for them with a part-time job.

Hatchin’s oppressor-of-the-week is Ramu, but it’s different that she’s there by choice. Being a little kid with no ID, Ramu’s about as kind to you as you’d expect someone in his position to be (he also has a daughter). We also liked Hatchin shearing her pom-poms, a gesture symbolizing that the old put-upon Hana is gone (even if that’s not really true, at least not yet). Her enthusiasm in her quasi-job (she’s never actually paid) and her failure to heed the warning about “climbing the mountain” almost got her killed, but she finally gives in to the superstition, and her miracle stone flies true. As for Hiroshi, we’re guessing that really wasn’t him – just a white guy who resembled the sketch – we’ll know for sure if Michiko continues her search. 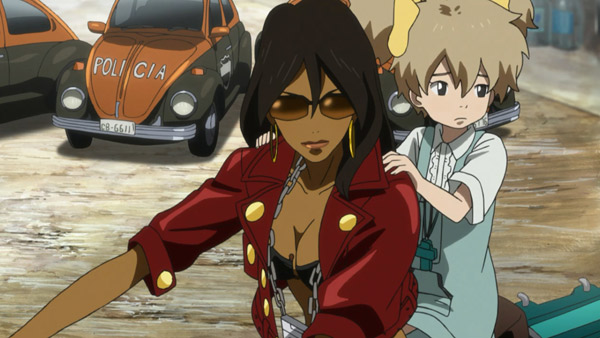 In a flashback 12 years ago, Michiko is transferred to Diamandra prison, where she’s visited and taunted by police sergeant Atsuko, who she grew up with. Atsuko also shows her a photo of the infant Hana. In the present, Atsuko is in charge of the police task force pursuing Michiko, who makes no effort to lay low. Despite Hana’s dubiousness, Michiko promises to protect her no matter what, and starts calling her “Ha-chin”. Atsuko and a police motorcade block the exit of the town where they refueled, and a wild chase ensues. Father Pedro, convinced if he kills Hana ke can collect the insurance money, chases and shoots at Hana, but Michiko rescues her, and they return to the road.

She and Michiko are being pursued for very different reasons, but after gaining her freedom from her horrible adoptive family, Hana – or “Hatchin” learns quickly that freedom is very difficult to hold on to once you have it, and requires constant vigilance; especially if your travelling partner-slash-mom happens to have the GTA equivalent of Seven Stars. Hana’s first impression of her mom is that she’s not really her mom, but is bad at math and is an immoral member of the criminal classes she wants nothing to do with. But she knows they’re connected, because they share the same tattoo (though Hana won’t let her see it.)

Michiko may not be perfect, but she does know how to survive, and she’s all Hana’s got. She’s too small and vulnerable to survive on her own, Pedro is convinced he’d make more money if she was dead, and if the police get her, she’ll be given back to them, or worse, sent to an even worse foster family or group home. As Hatchin comes to terms with the nature of her savior, we learn that knowing Hatchin was out there somewhere was what kept Michiko going in Diamandra. But if she wants to stay out, she might want to think about being more careful and less reckless now that Hana’s in her care. Not that that police chase wasn’t awesome; it was. 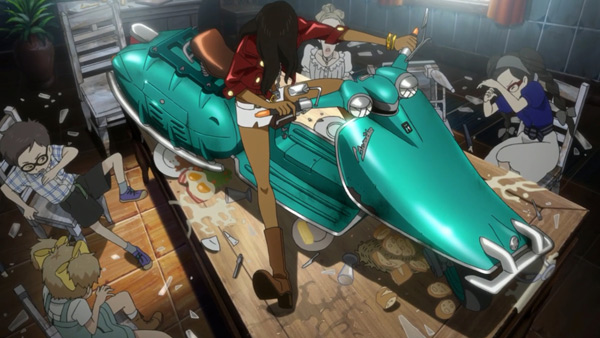 Michiko Malandro stages a daring escape from prison during a storm, and later holds up a bank for cash. Hana Morenos is the ward of Father Pedro Belenbauza Yamada, and is perpetually abused mistreated by him, her adoptive mother Joanna, and her siblings Maria and Gabriel. She finally snaps and has had enough, beating up Maria and running away, but comes back before long. When Michiko calls Pedro saying she’s coming for her “daughter” Hana, Pedro arms himself with a shotgun, but Michiko drives her motorbike in through the window, snatching Hana up and taking her with her on the road.

Having aired way back in October 2008, this Manglobe series predates our blog by about three years. We were far less attuned to what was airing and when back then, but a friend who liked the look of it recommend we give it a belated look, so here we are. The first episode was one hell of a ride, wasting no time establishing two things: one, that Michiko is a consummate badass who won’t be caged or tamed, and that Hana is a downtrodden oppressed youth of Dickensian/Dahlian proportions, sniped at on all sides by her soul-crushingly sociopathic adoptive family. No trouble feeling empathy for Hana.

Michiko and Hana couldn’t be more different, except for one thing: they both want freedom. And don’t consider this a dig, but we couldn’t help but think of the first Harry Potter book/film when we watched Hana’s story unfold. This is a child whose “family” doesn’t give a shit about, except when it comes to government child support, most of which probably goes toward lining pockets than filling the stomach in her tiny frame. But those hellish times she never deserved to endure may be behind her. There will be other dangers on the road ahead, but there will also be hope.