After seven episodes of floating around class causing a commotion, Lum officially enrolls at the school, surprising Ataru so much he nearly chokes to death. He insists Lum attending school will “cramp his style” but I know not of what style he speaks.

Lum isn’t the only transfer student either: the other is the newest addition to this boisterous and chaotic bunch: Ran, Lum’s childhood friend. Ataru starts hitting on her immediately, which is when Lum recognizes her and asks for a talk behind the school.

Once there, Lum and Ran greet each other like the old friends they are, and Ran says she’s disguised herself as a human so she could see Lum. But when reminiscing about old times brings up the boy they both fell for—Rei. who looks like a complete bore—Ran’s personality suddenly curdles into that of an enraged ogre.

Ran hasn’t forgotten how Lum stole Rei from her, and has come to earth to take revenge on her. Specifically, she intends to use her succubus-like ability to suck the life out of people with her mouth on an unwitting, two-timing Ataru who will be all too eager to kiss.

Lum tries her best to stick close to Ataru, committed to protecting her darling despite the fact he’d still cheat on her in front of her face without batting an eye. This episode does not show Ataru at his best, but I suppose it shows him at his most libido-first Ataru-ness.

Ran manages to get Ataru alone under a tree, but is unable to apply a smooch due to Lum flattening Ataru at the last minute with a tatami mat. I guess the injuries he receives as she keeps him away from Ran’s mouth aren’t as bad as what would happen if she kissed him.

During the cavalry clash, Ataru gets the chance to witness what happens as Ran accidentally kisses another boy, who ends up transforming into a feeble old bansai-watering fogey. And yet, Ataru doesn’t care in the slightest. He’s always been about the hunt. If capturing the hot babe of his dreams will result in his death, it will have been worth it.

Yet the day passes with Lum successfully defending her baka-darling from Ran’s lips. Ran slips back into her more mild-mannered mode, only to get all worked up again when she remembers the wedge that split the two of them apart: her would-be darling Rei—whom I must point out chose Lum over her. 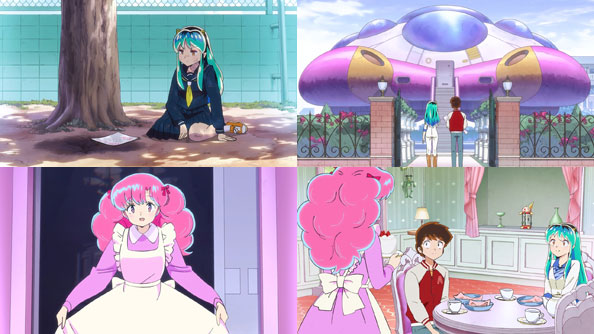 The second segment involves Ran saying, Poochie-style, that she’ll be returning to her home planet shortly, but wants to spend one more day of tea and cookies with her best friend and her darling. Why she chooses to relay this message via self-destructing Ran doll is a mystery I fear we’ll never solve.

Ditto Ran’s insistence on passing as human while her house is very clearly an alien spacecraft. Ran makes sure she looks her cutest and most innocent, as she tries to convince Lum that 1.) she’s really leaving and 2.) she’s given up on stealing Ataru from her. That fiction evaporates when Lum feeds her drugged cookies to a sentient vase that then falls fast asleep.

But Ran has more than one trick up her lavender sleeve, as she’s preparing a copy of Ataru in her oven, identical in every way except for an apostrophe near his head (looking like a kind of floating ahoge). That apostrophe is actually one of the first things the real Ataru notices, and he snatches it just as Ran grabs him and returns him to Lum, thinking he’s the copy.

Ataru doesn’t know it, but he accidentally saved his ass by grabbing that little thingy. As Lum forces him to leave with her, Ran storms out holding a wholly deflated Ataru clone, madder than ever. That night, Lum, ever the optimist, wishes she’d tried to get along better with Ran before she returned to her home planet.

Of course, Ran doesn’t return to her home planet, but back to Ataru and Lum’s school the next morning, still maniacally determined to steal Ataru from Lum and suck the vitality out of him. So for all intents and purposes, she’s here to stay … and I’m fine with that! The more intensely-haired shiny alien beauties, the better, I say. I’m simple like that!

Ran is, you’d probably guessed voiced by the incomparable Hanazawa Kana, and I’m glad Urusei Yatsura saved one of the biggest guns in its massive seiyuu arsenal for a character with a split personality; the better to utilize Hanazawa’s fantastic vocal range. She has the ability to jump from syrupy-sweet to pure venom on a dime.

She also makes Ran, for all her flaws, a lot more likable than if someone else voiced her. The episode also wisely kept Shinobu, Mendou, and all the other characters out to the periphery so it could focus on the Ran-Ataru-Lum triangle at hand. I’m sure it won’t be long before Rei arrives on Earth to try to reclaim Lum’s heart. His efforts are sure to be met with failure, since Lum only has eyes for Darling now.