Picking up hot on last week’s tale, Edwina takes Maria to the battlefield and reveals that she was the source of paralysis gas (and Garfa’s arm). But the little details aren’t the point of this episode, even though there are a ton of gems sprinkled throughout.

No, the point of this episode is making sense of everyone’s feelings and bringing a close to the hostilities between France and England. At least, within geographic reach of Maria.

ignoring why Joseph is there in the first place, he makes a good point about Garfa: He’s the same as Maria. They are both strong, strong willed to the point of being stubborn, and use their strength to pursue the purpose they have assigned to their lives.

This does not go well and at last lends some coherent emotion to the nicely animated fight. (which, in the tradition of the show, is the opposite of over-the-top in rendering and style) 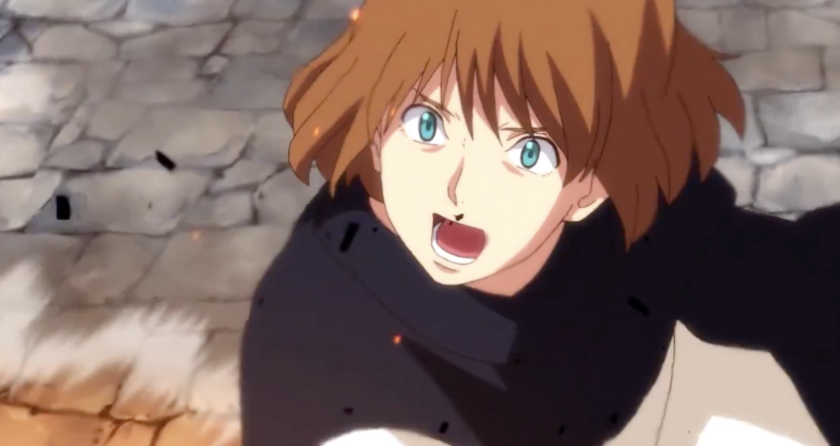 Meanwhile Gilbert confronts Bernard about the witches medicine, which Bernard admits he knew he was using to help the people. Rules be damned, anything in the world can make the world a better place. (and to better the church’s position)

This declaration also doesn’t go well. However, unlike Garfa, Gilbert doesn’t try to run anyone through in a haze of frustration. That said, I get the feeling Bernard is about to get an unexpected smack down from the inquisition…

Continuing to tie in all the loose threads, the Old God tries to make Ann forget Maria, possibly to force Maria onto his side, but it doesn’t work. Ann’s support is iron clad, much as the Church fears it to be, and when Joseph finally defeats Garfa, Maria’s tree house (and powers) are quickly restored.

As to Joseph’s victory… let’s just look above at the hilarious take down assist brought to him by Maria. She’s so unabashedly hard core about it that I can hardly fault Joseph for his lengthy banter and refusal to accept his worth in her eyes.

The resolve, starting with their exchanged vows and ending with the tree-ification of the castle, was all quite nice. As with everything this episode, the visual details were all unique and really lent to the wonder and excitement of their coupling.

And then the couple is summoned by Arch Angel Michael and who knows where the series is headed for its final episode? Honestly? I don’t care at all — it’s been a lovely ride all along and, typically sluggish middle or note, it was well worth all of our attention.