I traveled more than three years into the past to watch Steins;Gate, eager to find out if it really was as great ad many had led on. I had no idea what I was getting into, but because I was told to expect greatness, it gave the show a greater burden to overcome than simply pulling something off the shelf and watching it with absolutely no knowledge of its standing in anime history.

I guess what I’m blathering about is that despite knowing so little and expecting so much, I entered Steins;Gate extremely confident it would meet and exceed any expectations I may have harbored. It also felt like an old friend, like something I had watched before and forgotten, as hard as that is to believe (the forgetting part, that is).

For all I know, in another universe, I have seen it, along with many other shows I’ve never watched in this one. And because memories can transcend the boundaries between universes (because I said so, okay?) I knew I was in good hands; that there’d be no way this show would disappoint. Maybe I have Watching Steiner; who knows. All I know is, I have a new favorite anime.

A show so earnest and confident and masterful in its layering and weaving of stories wasn’t going to mess up it’s ending. More to the point, it knew after twenty-three episodes, many of them putting us in the emotional spin cycle, that its audience would want a “Good Ending” after the “Bad Ending” of Okabe having to sacrifice Kurisu, and the “Worse Ending” of Okabe killing Kurisu.

It’s also great to see Okabe in high spirits again, even if he is partially putting up a brave front. Everyone’s stoked that the Okarin they know and love is back yukking it up and spouting nonsense. His high tide lifts all boats. And when Mayushii manages to get Okabe to admit he and Kurisu love each other, she gives him her full support in saving her no matter what.

The fact that Mayushii, like Feyris, is able to remember bits and pieces of other timelines, gives both Okabe and me optimism that if Kurisu is saved, she’ll remember the three weeks she spent with Okarin and the rest of the Future Gadget Lab. It’s not so much Reading Steiner as love crossing the boundaries of world lines, and the stronger the love, the more they can recall. Why else would Kurisu have believed Okabe so quickly so often while he was trying to save Mayushii?

Armed with the Cyalume Saber (powered by stuff that looks like fake blood) a stun gun (to knock out Kurisu and lay in said fake blood) and most importantly, the knowledge of who’s going to be where and when, Okabe goes back with Suzu. He buys the Metal Upa so when Mayushii buys one, it’s not metal and doesn’t end up on Nakabachi. Kinda awesome a 100-yen toy is the key to preventing a temporal arms race and Third World War, but that’s the infinite possibility of time for ya.

I want to point out, the music throughout this episode is fantastic. I has the perfect balance of urgency, occasion, an impending end (one way or another), and ambient casualness, making for a stirring “final dungeon” soundtrack.

Meanwhile, in his exuberance to get on with the mission, Okabe neglected to check if the liquid in the Saber was still liquid. If he’d discovered it had dried up before going back in time, he’d have had time to procure some fake blood from a nearby store (it IS Akiba). Alas, he only finds out he has no fake blood when he’s about to use it. Just as a little metal toy can lead to the decimation the human population, a little slip-up like this can place his last chance to save Kurisu in jeopardy.

No matter: I knew as soon as I saw that dried-up liquid, before he looked at his own hand, that the mission was still alive; he’d simply have to use real blood; his own. When he interrupts the pleasant father-daughter discussion, this time he has a cool head and even uses his usual theatricality to throw Nakabachi off.

Okabe is front and center, with Kurisu in a much better position in the room to avoid knife charges. Nakabachi has no choice but to pay attention to him and only him. Greatest of all about Okabe’s entrance is that this isn’t Chuunibyou or delusional behavior on display: Okabe really has come to save Kurisu and rearrange the world order. 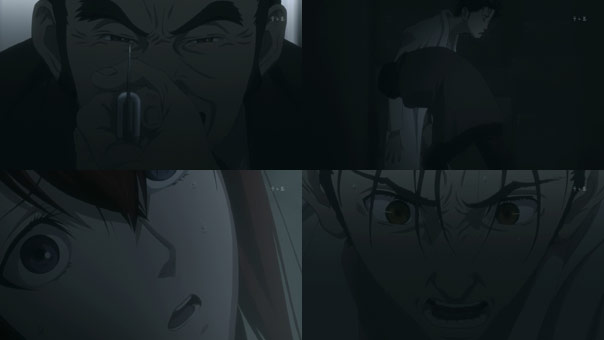 He’s also a true hero, who literally takes a knife to the gut to complete his mission. Whatever questionable stuff one can accuse him of doing to get to where he is now, this act absolves him of most if not all of it. Getting stabbed fucking sucks. I’m not speaking from experience, mind you, but even in animated form it’s obvious that it does. And S;G’s sound effects make that even more clear.

Nakabachi gets Okabe pretty good, but Okabe is able to stay concious long enough to scare the shit of of Nakabachi, forcing him to flee, and then zapping Kurisu with the stun gun. You can see the fates conspiring with Okabe in the depths of Nakabachi’s eyes, willing him to GTFO. Nakabachi is no mastermind villain, just another variable that has to be manipulated at the right time and place, like a Metal Upa.

Okabe arranges Kurisu face down in his own blood, creating a scene identical to the one he himself saw those same three weeks ago. This scene overwrites the one in which he accidentally stabbed Kurisu, so the horrifying death scene Past Okabe and we witness/witnessed in the very first episode was really the other Okabe’s art project. We know that because we witness it again with Okabe, just before Suzu hauls helps him back into the time machine. MISSION COMPLETE…and it feels so good.

So what is the Steins Gate World Line like? Well, it’s everything you’d expect from jumping through every hoop, choosing the right dialogue for each character, and collecting every hidden secret crystal: the previously stated “Good Ending.” In it, Okabe recovers from his wound and proceeds to give every Lab Member he’d appointed in the previous world lines a pin, making their membership official in this one.

It’s a beautiful little gesture that reminds us that before it became all about saving people he loved from being killed off by time, and even during those times, this was a show about a bunch of strange, unique, interesting people coming together to collectively do great things. Okabe needed every single Lab Member to accomplish what he did, and his warmth and charisma and crazy ideas, made that coming together happen. 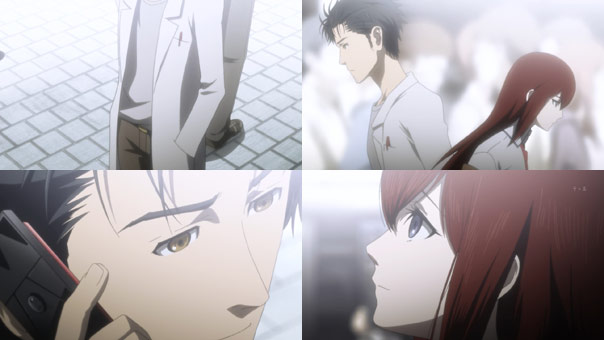 He, and we, are finally rewarded by not only getting Kurisu back, but having them meet by chance on the (very!) busy streets of Akiba, home to the Culture of Cute as it should be. And not only do they meet; Kurisu remembers him, because they share a bond only Mayushii’s can compare to, one in which two people who love each other deeply don’t forget that love just because the world line has changed.

There’s a lovely understated elegance to Okabe and Kurisu’s pre-curtain reunion. No big dramatic music calculated to rend the heart just so; no sudden change in the world’s palette; just two people suddenly realizing they just crossed paths with the one they love, and affirming it with a few simple, in-character words as the sound of the bustling city around them fades. Kurisu being alive may have been enough for Okabe, but not me. Her being alive and back in his life is a far better outcome.

P.S. Whew…now that was a good show, wasn’t it? But I know; these 24 episodes aren’t all there is. I’ll get to episode 25 soon enough, along with the film. Looking forward to both. Thanks for reading!