Halfway into last week D4 wrestled their Little Draisine That Could to life and started their harrowing journey across the Usui Pass on a retired line. That draisine keeps rolling throughout most of this episode as they battle tree roots, a punishing ride from the ABT that keeps them planted to the rails, and gravity and brake fade when it fails.

The draisine is therefore the entire world for D4 for an extended period of time. It’s a world that depends on their constant alertness, smooth cooperation, and quick thinking when disaster threatens to strike, which it does, again and again. Had the team simply sat in their seats for the ride, they’d have derailed a half-dozen times over last week alone, before they got to the old tunnels. 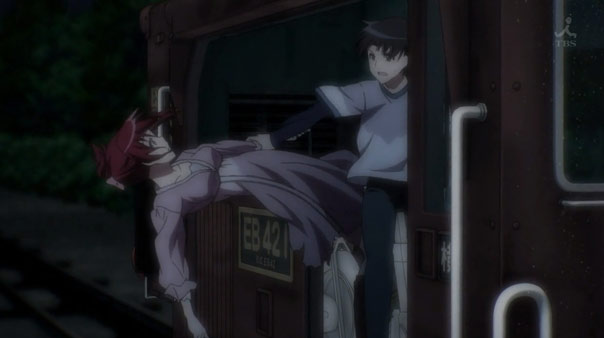 Due to the close quarters and the constant demands of the draisine, it’s also an intimate and physical world, with bodies flying all over the place, hanging (or almost falling) out; pushing and pulling and yanking and pedaling and sweating…“Almost sexual, isn’t it Smithers?” Unsurprisingly, Naoto and Aoi come together the most, but what’s clever is that all their contact is incidental, and crucial for that task at hand.

Everyone gets pretty trashed, including the Draisine, which leaves a trail of shed parts in its wake. Shou hurts his foot pushing off the tunnel wall to right the train, but still pedals with all his might, and even jumps out the back and slides along the rails on his rubber soles, trying to slow the draisine. Ultimately, the others have to bail out, with Naoto cushioning both Haruka and the organ box.

Ah yes, the box. While Haruka’s role in the mission is largely non-physical (or at least less taxing than those of the others), she’s also responsible for taking care of that organ box. If it’s damaged or falls off the train, it’s Mission Failed. That, and her quickly-acquired mechanical know-how comes in handy again this week, and on the last curve, all four have to lean out, including her.

The draisine was a micro-world for a while, but it was also a crucible: one in which D4 became stronger and closer. Naoto thanks his team and tells them even if he wants to be a driver, right now he’s public safety, and there’s no where he’d rather be now. Once the mission is complete, they have another go at the simulator and pass, and the group finally gets to relax and have fun—or rather less death-defying fun—together.