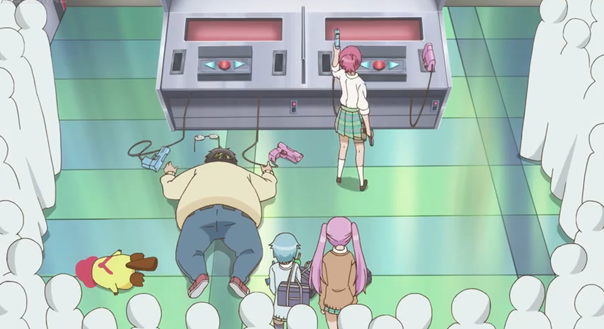 Momoka is challenged to an arcade shoot out by an Otaku who turns out to be the national champion. In the final moments of her assured defeat, she embraces victory at all cost and clobbers the man over the head with her pistol and wins the day.

Ep 4’s opening arc is packed full of wacky humor. Mio, who has nothing to do all episode, appears in a floating bubble and gives Jedi advice to Momoka. It’s cute, unpredictable, and has plenty of fun at the expense of otaku light-gun games and their players. 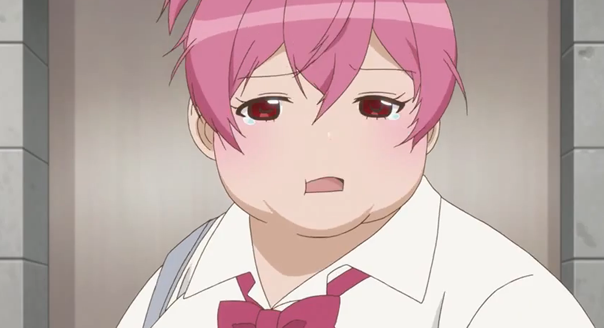 The second arc is all about Momoka getting really fat because she doesn’t read nutrition labels and eats like a pig. It’s a hilariously bizarre chapter and while it certainly isn’t nice about fatness as a topic, it’s nice to see a topic so rarely brought up in anime.

The final arc is dedicated to the final member of the survival club team: Platty, the otherwise non sequitur animal character. Tying into Momoka’s lack of attention, Platty (and several of the girls) have been eating breakfast at her house for the past few weeks… and she’s only just noticed!

Driven by the sudden realization that she knows nothing about this animal, and annoyance that her mother so readily feeds everyone, Momoka becomes a stalker. The end result is… a shoot out with her mother late at night, which her mother wins, proving how little Momoka knows about anything!

This show is just so unpredictable I can not help but love it. In a sea of ‘yeah I saw that coming a mile away’ story lines and character interactions, Sabagebu!’s surprise factor is priceless. Thumbs up!