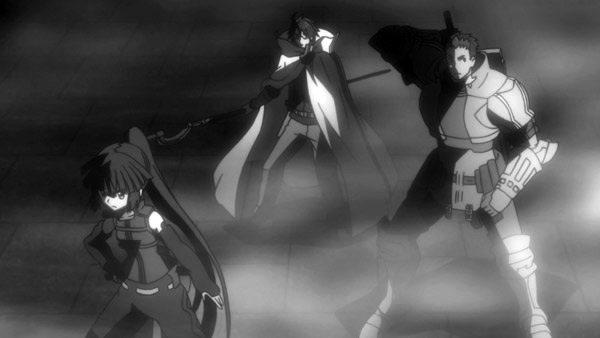 Shiroe, Akatsuki and Naotsugu trek through the underground “Depths of Palm” in order to reach Susukino and Celara, who is staying in the house of the kindly cat-man Nyanta. Susukino is under the iron rule of “Brigandia”, a guild of PKers led by the ruthless Demikas. Shiroe falls from a great height when a stone bridge collapses. He survives, but while he’s out he dreams of his times with the Debauchery Tea Party, which he remembers fondly. The trio defeat a rat boss and reach the surface, where they’re met by a stunning sunrise.

After three episodes, we’ve decided to log out of Log Horizon after all. There are some charming and satisfying aspects to it that will make it harder to drop later, and we can’t overlook its flaws. For one thing, it’s far too safe. You’d think a series about a fantasy RPG brought to life would have a little more immediate peril to it, but the characters are already Level 90, and everything is a breeze. Add to that Shiroe’s rather annoying tendency to narrate, and we end up feeling like we’re watching a tutorial or walk-through of an RPG rather than experiencing a story firsthand.

Our impressions of an anime are informed by our not-inconsiderable past anime-watching history; if we find ourselves watching something awfully similar to something we’ve already seen, it had better either surpass that past series in some way, or offer something new. We can’t help but hold Log Horizon up against Sword Art Online and find the former lacking. Not that SAO was perfect, but it did set a standard in both production values, empathy with the characters, epic scale and genuine danger that this series can’t match. Sayonara, Log Horizon.