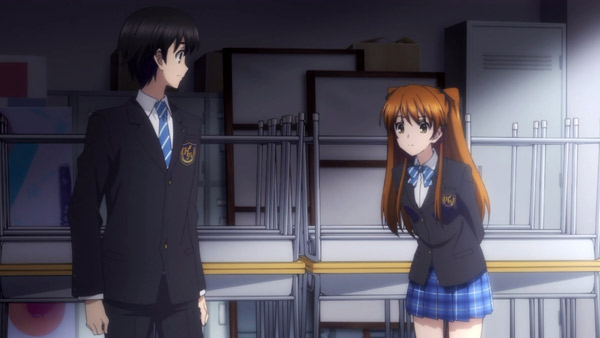 When not helping his friends out with the Houjou School festvial, the smart, diligent but preachy Kitahara Haruki practices the guitar in one of the school’s three music rooms. In the room next door – reserved for elite musicians – a mystery pianist often accompanies his playing. He meets the beautiful, popular Ogiso Setsuna when he assures her on behalf of the festival committee that she need not enter the Miss Houjou contest for a third year if she doesn’t want to. On the last day he plays his guitar, he hears the piano as well as singing from the school roof. He runs up to find that it’s Ogiso.

This is a sequel to a series that aired back in Winter 2009, before RABUJOI came to be. It lasted two seasons and 26 episodes, and we stuck with it as the protagonist juggled his kindhearted, rising idol soul mate (voiced by Hirano Aya) with a fair number of other ladies, including her manager. We liked how it took place in a time before cell phones and the constant connection characters take for granted in most contemporary anime, though it often over-relied on those technological limitations to hike up the drama.

This new series takes place ten years later, and that idol’s signature song just happens to be the first CD the new protagonist Haruki bought and learned for guitar. There are cell phones in this series, but there are still boundaries between the characters. There are literal walls, in the case of Haruki and the as-yet un-introduced pianist in the adjacent music room; and there are the emotional walls Ogiso (not voiced by Aya) has put up to hide her true self. Haruki is an intelligent, perceptive, rational, honest guy, but once he’s inevitably embroiled in a love triangle, we suspect those qualities may not help him, and may even hurt him. 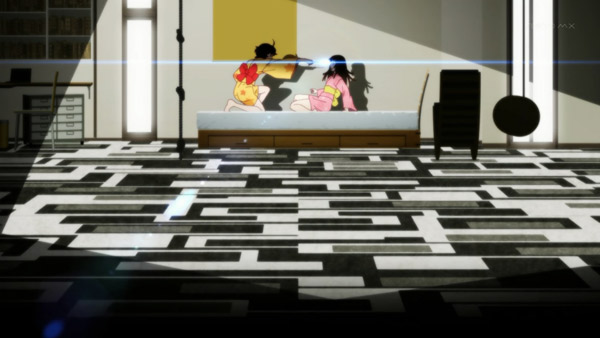 Expecting to find Koyomi in his bed, Tsukihi is surprised to find Nadeko there. They have a heart-to-heart, in which Tsukihi suspects Nadeko takes comfort in persistently loving someone who will always be unattainable. Bored with that stance, Tsukihi snips Nadeko’s bangs. The next day at school, Nadeko is as different a person, confidently, angrily chewing out her teacher and classmates. She leaves school early, and asks Kuchinawa to tell her where his object of worship is so they can part ways quickly. The object is at Koyomi’s house – a talisman hidden in porn. When Kuchinawa asks her what she wants (other than her bangs back) in return for helping him, she asks if he can make Koyomi fall in love with her. Koyomi enters the room and says no.

Well, Nadeko’s “honeymoon” with Kuchinawa is over; and by episode’s end she wants a separation. After an immersive, somewhat wall-crumbling talk with (and haircut by) Tsukihi, Nadeko becomes a new person at school. To that end, Hanazawa Kana dispenses with her cutesy affectation and goes into full Bimbougami-ga mode, firing with both barrels. Nadeko shocks her teacher and classmates, but she, Kuchinawa, and we all know that this wasn’t a case of Kuchinawa taking over her mind and body. This was a look at the Nadeko within – prodded by the oddity and enabled by Tsukihi’s frustration with her. Disheartened by the realization all she’s been has been cute, in one day she upturns that persona – without even thinking.

We think she scares the crap out of herself, leading to her suggestion to split with Kuchinawa at the earliest possible convenience. Her desire for alacrity suits Kuchinawa just fine, since he’s after his object of worship…which just so happens to be in the house of Nadeko’s long-time object of desire. Once Kuchinawa offers to do more than simply restore her bangs, Nadeko contemplates doing what those bangs allowed her to do: take the easy way. Instead of looking straight at people and speaking her mind, she’d always look down and apologize. Instead of going after Koyomi’s heart the hard way (like Tsukihi wished she would), the shortcut tempts her. And then Koyomi catches her in his room. We’ll see if the jig is finally up.