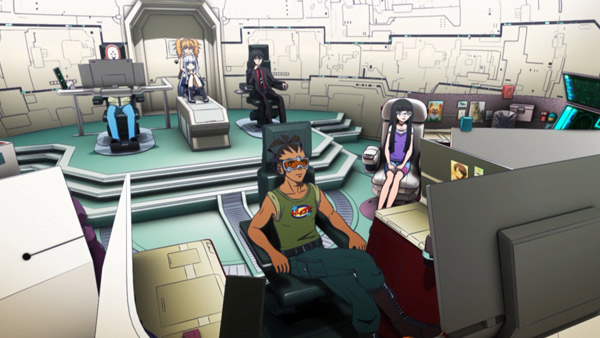 The nations of the world have been splintered, isolated, and pushed to the brink by the technologically advanced naval “Fleet of Fog”, who go on to rule the seas. Promising military student Chihaya Gunzou is shown a top secret fog submarine I-401 that activates when he touches it. The next day, an ethereal girl Iona confronts Gunzou, telling him she is the embodiment of the I-401, and her only order is to obey him. For the next two years Iona, Gunzou, and a crew of his classmates battle the Fleet of Fog as an independent ship. The Japanese military hires them to transport a new, potentially game-changing weapon to America for mass production.

It’s always been a custom to refer to the vast majority of boats, ships, and naval vessels as female in gender. We don’t know why for sure, but it feels right for some reason, as there’s something maternal about how they bear their crews and cargo and protect them from the harsh seas. This series takes that tradition to its quasi-logical conclusion: giving vessels actual human avatars. Rather than a mother, Iona comes off as more like a highly dutiful little sister to Chihaya Gunzou. In the flashback when they meet, once he realizes the power at his disposal, he wastes no time agreeing to be her captain. The setup is very efficient, quickly establishing their rapport and then showing the product of two years of collaboration.

We can see the cel-shaded CGI being off-putting to many, like Aku no Hana’s rotoscoping. It almost suits the not-really-human Iona, but the problem is everyone moves in pretty much the same mechanical way, and their gazes are a bit dead-eyed. Their movement aside, the character and costume designs are top-notch; the colorful crew reminded us of Eureka Seven, both in their look and the way they roam the seas (mostly) free of government masters. Gunzou is dedicated to shattering the status quo by taking the fight to Fleet of Fog – a gang of haughty ladies in elaborate garb going after Iona the deserter. There’s nothing particularly groundbreaking here, but it looks like a solid, professional series.

First-year College student Tada Banri, new to Tokyo, gets lost and misses his entrance ceremony, but ends up meeting one of his classmates, Yanagisawa Mitsuo. While walking to class, a gorgeous woman hops out of a cab and beats Mitsuo with a bunch of roses. She introduces herself as Kaga Kouko, Mitsuo’s very controlling and clingy childhood friend and self-proclaimed future wife. Tada ends up making several friends on his first day, including Oka Chinami and Hayashida Nana, and feels good about his new life.

A fresh start full of potential and glimmering like gold: this is what Tada Banri seeks, after an only partially-disclosed past that was less promising (involving a motorbike accident, it would seem). He’s happy with his new home, and excited for all the opportunities that present themselves on just his first day. In a season brimming with high schools, the college setting is a breath of fresh air. These people haven’t yet fully stepped into the world of adulthood (like the three newbies in SxS), but they’re on their way, bright-eyed and bushy-tailed.

Tada also wants to fall in love, and he believes the current conditions to be ideal for that purpose, even as he finds himself lodged between the formidable duo of Mitsuo and Kouko. Mitsuo is over-the-top in his criticism of her, and she’s just as over-the-top in her persistent badgering. We don’t know the whole story behind these two, but the dynamic of Kouko and the two guys – one of whom is a lot more tolerant of her – should prove entertaining. The episode was also suffused with a buoyant, cheerful energy and the other two girls quickly introduced show promise.

The strategist gamer Shiroe suddenly finds himself trapped in the MMORPG “Elder Tale”, which has become his new world and reality along with 30,000 other Japanese players. He finds his former partners – Naotsugu, a guardian who had logged on for the first time in two years, and Akatsuki, who was a quiet male assassin in the game but turns out to be a girl. She uses one of Shiroe’s potions to take female form. The three form a party and set out in search of enemies on which to test their skills.

Sword Art Online must’ve been a hit in Japan; otherwise, why would a series like this exist a year later? We’re not saying the two shows are identical, but the similarities are striking: a male lead who isn’t as tall and handsome as his game avatar; his trusty, bawdy male sidekick; the loyal badass female lead; and oh yeah, they’re stuck in an MMORPG. Mind you, this first episode was quite lighthearted and lightweight; there was no foreboding announcement by the programmer, and it doesn’t sound like a KO in the game kills you in real life. We didn’t really mind the lighter, jauntier tone, but we’re not sure it can be sustained for 25 episodes.

SAO started out fairly jokey too, but by the end Kirito’s sister was falling in love with him and the villain was planning to coma-rape Asuna…so yeah. We know we could do with a bit less J-bro humor from Naotsugu, Shiroe’s pretty bland, the visuals and costumes didn’t really impress, and the soundtrack was thoroughly forgettable. Akatsuki gave a nice first impression, and we dug the trio’s positive attitude in the face of the sudden extreme change in their lives. Still, we’re not sure we can commit to two cours of what was awfully similar to SAO, only with a weaker first episode and so far, much lower stakes.