Todou’s “join me” schtick doesn’t work, as Yukio tells him he loves Rin as much as he hates him, but hates the old Yukio who was a sniveling little punk always in need of Rin’s help.

Yukio summons a coven of naiads and puts Todou in a water prison. I’m glad Exorcist isn’t playing the “Yukio switches sides” angle here, and that Yukio actually gets one over on Todou in what had been a laughably one-sided match.

As for Rin, he’s trying to stay positive and cheerful while riding Kuro to the sproangium, but Bon can tell from his shaking hands that Rin’s just trying to keep it together, like he is. Kuro gets them into position, and Bon is able to put up a giant fire barrier to contain the sporangium (during which a phoenix screams like a red-tailed hawk for some reason). 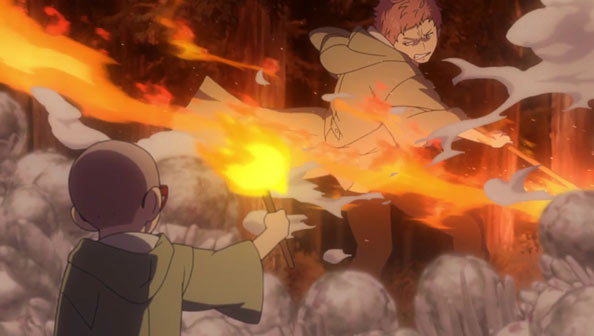 As all his family and friends fight what looks like a hopeless battle, Shino is consumed by fear and self-preservation, even going so far as to abandon Koneko when he refuses to run away. Shino only gets a few paces away before Koneko is about to be killed and he swoops in with his staff. As much as he wants to run from this situation—and his blood—he just can’t. He’s a part of this.

Meanwhile, Izumo lets her guard down while admonishing Shiemi for not letting herself be protected by someone stronger, and gets covered in spores. Using the “if not now, when” argument, a desperate Shiemi finally manages to summon Nee-chan, and prepares to free Izumo, who takes time to ponder why she agreed to all this in the first place.

Despite everyone’s efforts, the sporangium still bursts, and it feels like a huge setback when it happens. Fortunately the barrier holds, but that Bon can’t move if he wants to keep it up is a huge challenge for Rin and Kuro.

Rin almost felt like he could unsheathe his sword when Kuro was in trouble (Kuro gets out of it on his own); I imagine the time is quickly approaching when, like Shiemi with Nee-chan, Rin can’t go without its blade any longer.

As for Yukio, his water prison crumbles and he’s about to get burnt alive by Todou, but his eyes suddenly glimmer with blue flame—like Rin—which causes Todou to instinctively jump back.

Before Todou can get back to killing Yukio—or Yukio can determine what the hell’s up with his eyes—Juzu & Co. arrive to fight Todou. But yeah, those blue eyes are definitely an interesting development.

One thought on “Ao no Exorcist: Kyoto Fujouou-hen – 09”