Well, like its last season, KonoSuba only ended up lasting ten episodes, but it delivered an action-packed and generally really good-looking finale that actually covered a bit of plot to go along with its omnipresent comedy. Plus, everyone had a chance to look really cool, even if things ultimately don’t quite work out as planned, as usual.

After using Darkness’ noble status to gain access to a contaminated hot spring, the party encounters Hans, the frustrated man whom Kazuma related with so much last week. Turns out he’s a leader in the Devil King’s army, and a deadly poison slime to boot.

Wiz is content to say hi to her old comrade at first, but when she learns he’s eaten the innocent hot springs overseer, she finally shows her teeth…and Horie Yui finally gets some meaty badass lines.

When the angry mob finally catches up to the party and sees Hans’ true form, they realize Aqua wasn’t a fraud after all. They send healing magic her way as she attempts to purify the spring, while Darkness protects them from errant slime bombs (even though they still hate her for being an Eris cultist).

Kazuma buys time for everyone by serving as a diversion for the slime and getting eaten (but not fully digested, facilitating his resurrection later) so Megumin can use Explosion magic to reduce the slime’s size, allowing Wiz to encase him in a Cursed Crystal Prison.

When even that’s not enough, Aqua draws power from her wishy-washy followers and their ridiculous credo (and that old man chanting about Eris’s padded chest) to land a GOD BLOW and GOD REQUIEM on Hans, finishing him for good, probably.

It’s perhaps the coolest and most badass we’ve seen Aqua look yet, and the shortened season clearly freed up significant fundage for a dazzlingly-animated battle…though Kazuma is dead for a full half of it, the camera still cuts to his dry bones often. He did his part! 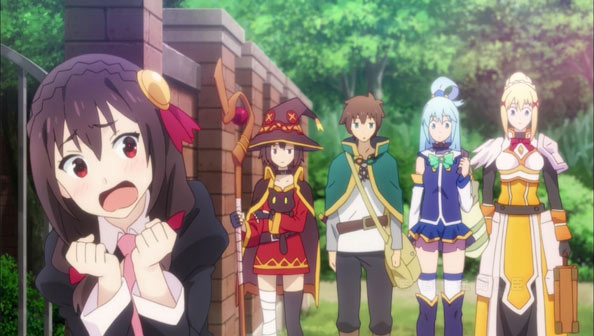 Naturally, despite all the displays of badassdom, Aqua’s magic finishing moves ended up turning all the profitable hot spring water in Arcanretia into plain ‘ol water, and she’s run out of town by her justifiably angry, ungrateful followers.

The gang heads home the same way they arrived: by wagon (Wiz was greatly weakened and almost killed, again, by Aqua’s magic), and everyone is just happy to be home. Even after all he’s been through and all the failure and destruction his party has wrought, he still feels blessed to be living in such a beautiful, if often hard, world. It’s certainly better than being cooped up in his bedroom back in Japan, right?

KonoSuba is the kind of show that could simply keep on going, and the parting message that thanks us for watching doesn’t rule out a third season. But ten is a good number for a season of KonoSuba, and a year is a good amount of time to have in between those seasons, so no rush.