Junketsu no Maria closes with a story book ending. Maria and Joseph literally ‘live happily ever after,’ according to the narrator, all of the villains are punished and everyone who was nice along the way escapes without a scratch.

Maybe it was a little long winded and maybe it was a bit silly on the philosophy front but, over all, I found it satisfying and a thorough farewell to the cast. 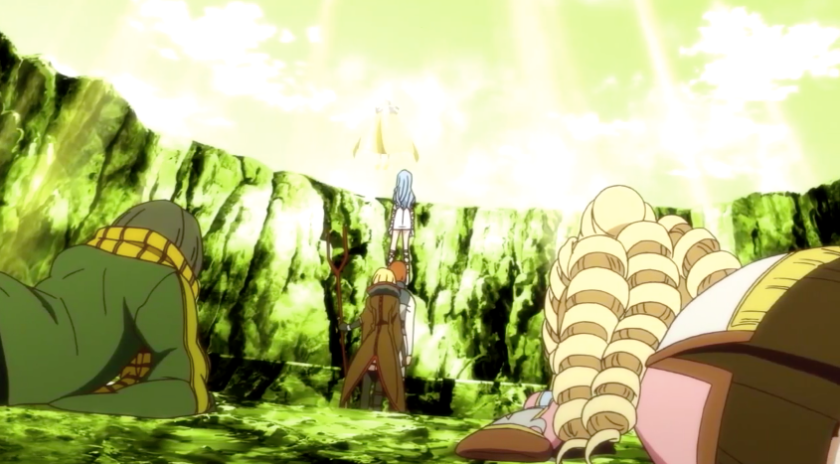 To sum up: Michael and Maria have their final show down but the action doesn’t last long. Even with the witches, the old gods, and Joseph all supporting her, Michael  is untouchable.

However, instead of killing team Maria, Michael psychically interviews all of the show’s side characters and ascertains that Maria is ultimately a good neighbor. Her opposition to conflict is so basic that he could even say she is part of the natural order now, which makes her out of his realm of responsibility.

However, he can’t let Ezekiel’s regular opposition go unpunished and so he banishes her from heaven… to be reborn as Maria’s child. Similarly, Le Comte eventually accepts Joseph’s love for Maria, and accepts Maria herself I guess because he’s not a totally bad bad.

Meanwhile, Bernard loses his mind and tries to start a new religion … but explodes into a pile of sand when he freaks out at Michael during their psychic interview. Gilbert is emotionally scared by all of this but, as he’s not really been a figure for evil during the story, his punishment is limited to witnessing the explosion and having to burn Bernard’s documents after the fact.

Oh and Garfa gets nothing for his greed, other than some coins and to live.

What didn’t work? Well… most of the dialog is gibberish. Not that a show of this complexity should be expected to weave a coherent philosophical explanation for itself but Maria dug its mumbo-jumbo hole pretty deep.

That said, presenting Maria’s narrative out as God accepting her as a ‘good neighbor’ was perfectly fine. It also gave a continued connection between Maria and Ann’s grandmother, and the village by extension.

Maria was a very fun show to follow. Strangely, none of the grounded, historical tech and technique made it into the final episode but that’s besides the point. The finale was all about the characters and for us to see them off — and see them off happy.

And for all the darkness those characters endured along the way, thats the best, most cathartic way to leave them.