Parliament is in session, and Leader of the Opposition Iwanaga Kotoko confidently casts her first net of logical fiction, hoping to snare enough votes to neutralize Steel Lady Nanase. A string of believable lies issues forth from her brain and fingers into the forums, creating a non-supernatural solution to the murder of Detective Terada. This early in the game she knows she doesn’t have to convince everyone, just enough to start creating reasonable doubt. It’s as much a murder case as a committee for a bill.

Her solution to Terada’s unusual, uncontested murder is surprisingly elegant and plausable, capitalizing on Terada’s general exceptionalism both as a detective and as a judo practitioner. She also makes good use of the site where his body was found (an abandoned gas station on a sleepy road). She spins the yarn of a the unghostly killer rigging a weight on a pendulum and luring Terada to the spot where it would smash into his face at great speed and kill him without resistance.

Since the episode can hardly just show Kotoko tapping away on her laptop in the back seat of a car the whole time, the online committee is visualized as her standing alone in cyberspace, surrounded by the screens of other users on the forum, poking holes into Kotoko’s solution. Kotoko expected this—any underdog would—and rather than trying to make everyone happy by plugging all of those holes, she settles for reducing the belief in the ghost story by increasing the specificity of the “real” killer’s description. 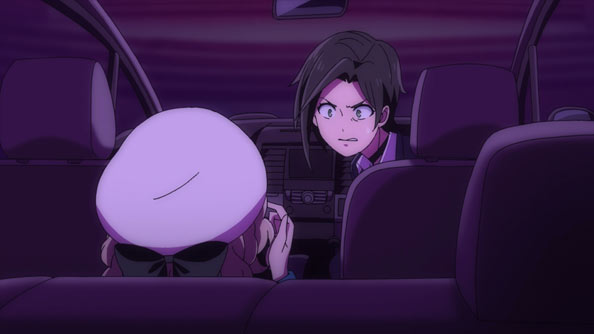 When that description starts sounding an awful lot like Saki, the policewoman turns around to shoot an angry look at Kotoko. She explains that it’s not her intention to frame an innocent policewoman at all, but to create an alternate killer that both fits the facts of the case and has motive (in the case of Kotoko’s fiction, romantic obsession). After all, neither her solution nor the legend of Steel Lady Nanase are true; they are dueling fictions. Since Rikka’s got a huge head start, Kotoko has to use every rhetorical weapon at her disposal to create lasting doubts.

And therein lies the challenge of this committee: even when Kotoko starts to sway the flow of the forum in her direction, the flow changes back to believing in the ghost all too quickly. That’s because Rikka is killing herself, visualizing and choosing the future threads that favor her ghost story. In the meantime, Kurou duelling with Nanase isn’t just to serve as a gauge for the effect of Kotoko’s lies (her power fluctuates in real time), but a way for Kurou to die and see the futures that favor those lies.

Despite it being another extremely talky episode of perhaps the talkiest show of the season, this is honestly all very fascinating and exhilarating to me. Your mileage may vary, but watching Kotoko do her thing is freaking awesome. Not only that, her first solution not holding up long was already folded into her calculations. She has three additional doubt-creating amendments to her proposed bill, so she’s feeling very confident about a legislative upset.

No sooner is Kuro’s mysterious cousin retroactively introduced as his “one true love” is the frail yet hauntingly beautiful Rikka revealed to be not only a fellow mermaid/kudan flesh-eater like Kurou (explaining why she’s his type), but the very mastermind behind the Steel Lady Nanase monster of imagination. Karin’s older sister was a red herring, while Karin herself was only a loose template upon which Rikka crafted a powerful urban legend.

Surprisingly—and yet not—Kotoko knew this all along, but coyly kept it from any part of the audience who didn’t suspect Rikka as soon as she was mentioned, not to mention from Saki. Kurou also knew it, which is the main reason he arrived to take the Steel Lady on (not exclusively because Kotoko summoned him).

As for how she knew, Kotoko recognized Rikka’s style in the illustration of Steel Lady Nanase that adorns the website, and which is key to creating a strong and consistent image grafted to existing rumors about the idol Karin’s ghost.

Once a goblin cat informs her that the Steel Lady has reappeared, Kotoko, Kurou, and Saki head to her location. There, Kurou will fight her, all night and dying several times in the process if necessary, as Kotoko works her logically fictitious magic in the car. Kotoko remarks that she’d rather not see her boyfriend die over and over, but this is the best way to keep Nanase from hurting anyone else.

As for why Rikka is doing this, Kotoko believes it’s so she can refine and expand her inherited kudan abilities. As Kurou mentioned, reading the future is an imperfect art, but Rikka is attempting to make her ability as perfect as possible, and is apparently obsessed enough in that venture to overlook the occasional murder.

Kotoko closes the episode with a wonderful analogy, likening her impending duel with Rikka as the start of a committee to discuss a proposed bill in parliament. It’s a deliciously wonky yet apt analogy. Rikka has a powerful, seemingly insurmountable majority with her captivating Steel Lady story and its accompanying imagery.

But here’s where things differ from government: among the “voters”—the tens of thousands who visit the site and contribute to the forums—there are no coalitions, nor alliances. Not only that, the masses aren’t explicitly aware they’re voting for anything; they’re simply going to believe the most compelling story. If Kotoko can convince them Steel Lady Nanase isn’t real, she can steel the votes and the majority, and sap her of her power.