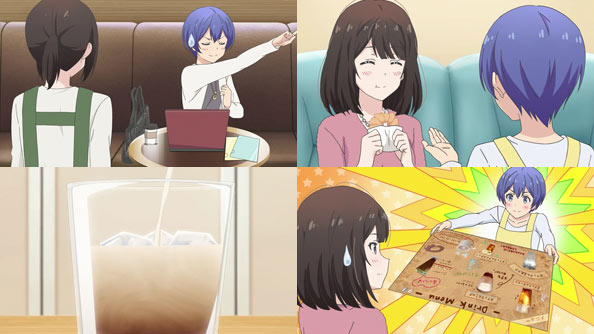 Aside from one extra-brief cameo from Nao, it’s a Michiru-and-Makoto episode this week, as Michiru tries to act like a cool Tokyoite by doing work in a Starbucks…only to scurry away when a barista approaches her!

Fortunately, the barista is Makoto, who just wanted to say Hi. But Michiru notices something off with Makoto, blames herself for bothering her at work, and makes up for it by preparing a little “home cafe” roleplay with donuts and coffee rum to unwind.

Turns out it’s “typical work stuff” bothering Makoto—not Michiru’s presence at the cafe—but that won’t stop her from having a coffee rum latte and trying out a few of the easy-drinking mixers one can make with Kahlua, which was actually the first alcohol I bought as a teenager! (The second was a King Cobra 40. My tastes were diverse!)

Once Michiru has unwittingly “greased the hinges”, Makoto opens up about what’s got her off her game: while on a job interview, someone said she had a fake smile. She asks how Michiru smiles, leading both into a very self-conscious mirror-viewing session, with no positive results in real smile development. Meanwhile, Nao’s drunken cat smile is a bit too real. 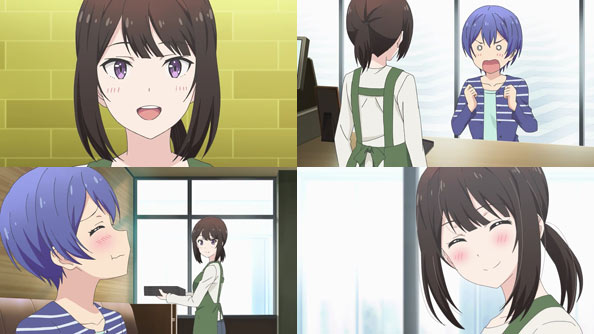 The next day, having unwound from coffee rum and sweets, Michiru greets her next customer with a perfectly warm, easy, genuine smile—and that customer happens to be Michiru again! Michiru tells her not to let a one-time comment in another environment get her discouraged about her face, and whenever she does, well, that’s when you break out the Kahlua!