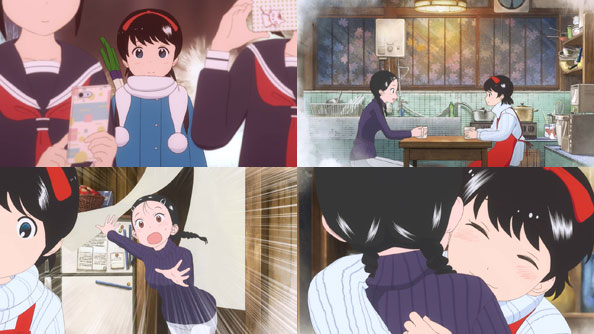 Nozuki Kiyo and her best friend Herai Sumire moved to the Kagai district of Kyoto from Aomuri at sixteen. Sumire came to become a maiko (an apprentice geiko, the Kyoto version of geisha), while Kiyo found her place in the kitchen of the house where all the maiko live like a family. We meet Kiyo as she’s carrying a sherpa’s load of groceries for the next round of meals.

We meet Sumire when she sticks her head into the kitchen to say hi in between her extremely rigorous study and practice. After meeting with her sensei, she learns she’s been given permission to debut, making it official: she’s going to be a maiko. Kiyo hugs her and congratulates her from the bottom of her heart, and Sumire has to excuse herself to wash away her tears of joy. It’s a lovely moment between good friends on very different paths, who happen to be able to still live together.

While serving the sensei and Maiko House’s mother, Kiyo learns that Sumire is extremely special, and may have what it takes to become a “once-in-a-century maiko.” The sensei compares Kiyo’s cooking and baking skills unfavorably to her “truly impressive” friend, but Kiyo isn’t insulted or hurt…she’s in full agreement that Sumire is indeed amazing.

In fact, it’s precisely because Sumire is so amazing and always gives her all, Kiyo is able to work hard to provide the Maiko house with nourishing, savory, energy packed meals to sustain their packed schedules. Kiyo even goes a little overboard for lunch one day, serving over a half-dozen dishes that could each be supper by themselves.

Then we meet a recently retired otokoshi, one of only a handful of men in the Kagai district who assist maiko and geiko with putting on their kimono, as well as doing heavy lifting and other manual labor the women either can’t or shouldn’t do (hernias are a bitch). In Kiyo’s case, she needs him to move the fridge so she can pull out the cookbooks that fell behind it.

Kiyo thanks the otokoshi by serving him coffee and a fresh-baked scone…a pretty good deal! Then Kiyo moves on to a matter of increasing concern for both her and the house mother: Sumire is working so hard, she’s skipping meals with regularity, and starting to lose weight. 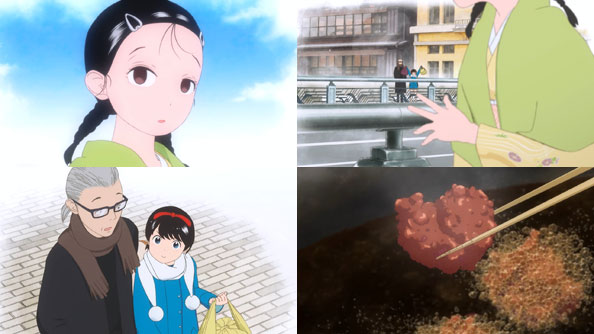 Rather than, say, lasso Sumire and force-feed her, Kiyo plans to prepare some smaller dishes packed with energy so Sumire can quickly get the nutrients she needs to keep going. Her secret weapon is a local dish from their home prefecture of Aomuri: fried squid mince. A familiar taste of home is just what her hungry friend needs.

Kiyo in Kyoto: From the Maiko House is very straightforward, but with the subject matter it’s presenting it doesn’t have to be anything more than that. It’s also lovely to look at and full of lush blend of traditional and modern music. Hanazawa Kana and MAO are captivating as the voices of Kiyo and Sumire, and their little “Dish of the Day” omake bits provide fun punctuation between the three segments. It’s pure comfort food and a warm, soft blanket rolled into one, and I loved it!