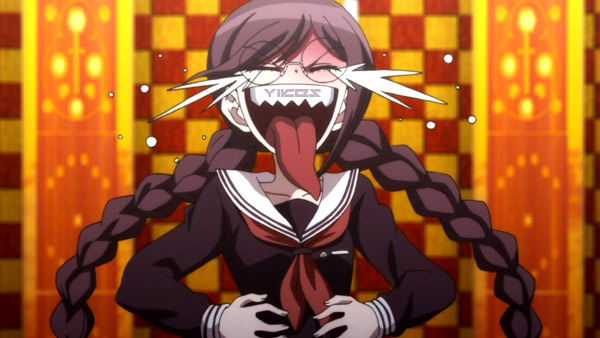 The second classroom trial begins with Togami pinning Fujisaki’s murder on Genocider Sho, AKA Fukawa Touko, who suffers from Dissociative identity disorder.The shock of him telling her secret draws the serial killer out, who tells them she didn’t do it, which is confirmed by the numerous inconsistencies in Fujisaki’s murder that go against Sho’s M.O. The killer turns out to be Ohwada Mondo, whom Fujisaki asked to help him (she was really a he) get over her weakness through training.

Ohwada, who killed his brother in a motorcycle race, got angry at Fujisaki’s sentiment he could change, and in a fit of rage, slugged him with a barbell. He swapped the locker rooms to try to preserve the secret of his gender, and Togami tampered with the body to test his fellow students. Despite Ishimaru’s protestations, Monokuma executes Ohwada by having him ride a motorcycle into a spherical cage and shaking him up until he expires from G-LOC. 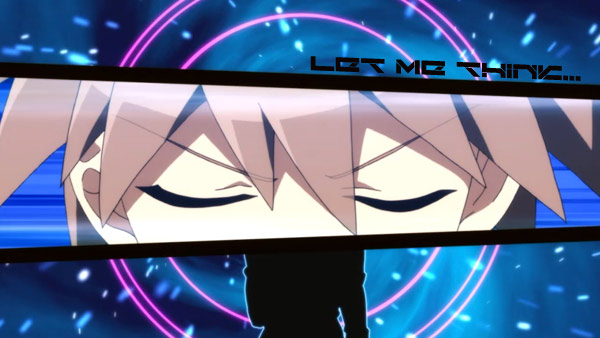 So, five episodes in, five students gone, ten to go…plus a sixteenth acting as a spy for Monokuma, who coyly won’t reveal to us. Like the previous “trail episode”, this one treated the students’ deliberation like a battle with manga-style storyboards, “verbal bullets” and “contradictions”, of which Naegi had three. It also confirmed that the Togami/Fukawa “alliance” was indeed just a red herring; while we didn’t suspect Fukawa was actually a serial killer (with a huge tongue), she nevertheless didn’t kill Fujisaki.

Still, the fact that Togami crucified Fujisaki postmortem just to test his peers shows he’s a pretty sick puppy himself. We’d also always considered Fujisaki to be of ambiguous gender at best due to her strange voice, so it wasn’t surprising that the truth was among the students’ dark secrets Monokuma distributed. The thing is, even though he knew Fujisaki’s secret, Ohwada of all people was fine with it, right until Fujisaki involuntarily struck a very raw nerve relating to Ohwada’s dark secret about his brother. The CGI execution is suitably whacked-out and morbid. 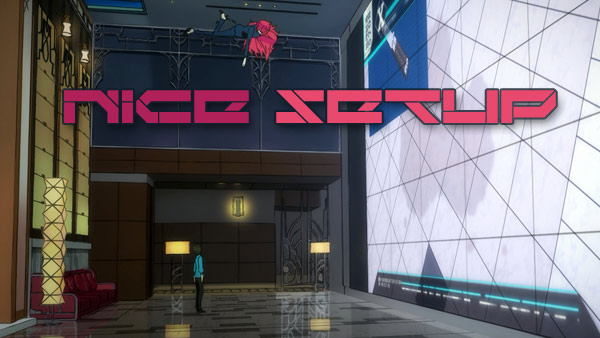 Rui summons the CROWDS to asist Galaxters, and the ropeway incident is resolved with zero casualties. Meanwhile Jou encounters a strange alien who he isn’t able to immediately defeat. Returning to base, Paiman orders everyone to do nothing, but he and O.D. are hiding the fact that the alien, one Berg Katze, is capable of destroying the world. Berg is also in direct contact with Rui. One day, Berg possesses a woman who hijacks a car and injures numerous people, all while Rui is watching helplessly.

Gatchaman’s big bad finally gets a name and considerable screen time, and proves to be a most unpleasant and devious individual. Of those who see and hear of him, everyone reacts to him in different ways. Jou simply wants to beat him down after letting him go earlier; Sugane and Hajime want to help people; O.D. and Paiman cower in HQ, one afraid of unleashing apocalyptic power, and the other afraid of losing more friends. Hajime also focuses on Berg’s claim humanity’s undoing will be their own fault, and if nothing else, she wants to find out what he(she?) meant.

What Berg probably meant was that he’s only able to enter the bodies of humans and wreak havoc because those humans let him. Everyone has a dark side within their hearts, and it would appear he uses that as an access hatch, and then it’s off to the races. Even toying around, he causes quite a bit of damage, while simultaneously pointing out the limitations of GALAX right in front of its fragile developer Rui, who is already dissatisfied with his progress with “updating the world” via a “bloodless revolution” fueled by altruism. It also seems like Rui’s unaware of other Gatchamen like him, but that’s sure to change.