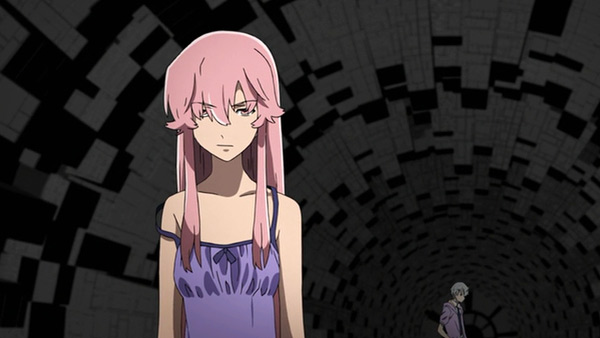 Ridley Scott intended for his cyberpunk/future noir film Blade Runner to have an ambiguous, non cut-and-dry ending, but the original American theatrical release in 1982, the studio insisted on a cheesy voiceover by Harrison Ford at the end, essentially pulling a “perfect happy ending” out of nowhere. The 2007 Final Cut, which we were lucky enough to experience on the big screen, ditched that voiceover and restored the open ending.

Why are we bringing up Blade Runner’s alternate endings? Because for us, this Future Diary OVA was that voiceover ending: tacked-on, cheesy, and unnecessary. We didn’t have a powerful need for a happy ending; the original one was fine. We were fine with Yuno and all of the others involved in the game returning to their normal lives, and the ambiguity of Yuno kinda sorta remembering someone. We were fine with Yukiteru brooding in the void for millennia with only Murmur and his brain for company.

Okay, so maybe we’re being a bit harsh. It’s been over two years since Mirai Nikki wrapped, and for many it was probably a thrill to see all the characters alive and well simply enjoying regular life. There were probably quite a few who relished Yuno picking at the scab in her brain until she finally ended up in the position to get her memories fully restored, enabling her to find Yukkii and reunite with him. And that’s fine. We’re just saying it wasn’t really our thing.

Stray Observation: The strange realm in which Yuno races to the Murmur holding her memories looks a bit like Orphan’s Cradle, the final dungeon in FFXIII…only less pretty.

This was a thoroughly weird and surreal eight minutes of Railgun. It had nothing to do with the story, but consisted entirely of the voice actors simply having fun during “outtakes” from some of the more serious past scenes in the show’s run.

It was pretty funny throughout, and we wouldn’t mind more shorts like this. Here’s what went down, in chronological order:

Dejected by his defeat and unsure why, Haruka hides in the showers, but the others drag him out in time to watch Makoto, Nagisa, and Rin. No one advances to the finals, but Gou suprises them by announcing she’s entered them in tomorrow’s medley relay. The team goes to Haru’s house, doubtful he’ll agree to swim. When he comes home, everyone has left but Makoto. Haruka hears the voicemail they left him and agrees to swim. The next day Rin catches wind that Iwatobi is swimming again, and gets to watch them swim, recognizing their strokes from years ago.

Wallowing in what is obviously a rare loss, Haruka protests not becoming “free” after racing Rin. He wasn’t supposed to care about winning; he didn’t think he cared about winning. But he clearly does care. When Makoto, Nagisa and Rin bump into Rin in the hall, Makoto sees the attitude Rin has adopted and takes him down a peg by reminding him it was he who taught Haru that there was far more to swimming than winning. Rin snubs it off, but he knows Makoto’s right, and thus can’t even go the rest of the day feeling good about his win.

Rin was just as happy about winning as he was showing up Haruka, but the next day when Haruka is right back out there, ready to swim, it shocks Rin as much as losing shocked Haru. Worse still, watching Makoto and Nagisa dregs up memories of swimming with all of them, and he’s reminded how well he knows them all. He’s also disgusted by Rei’s “excuse” for a butterfly, and even a little jealous that Rei’s swimming in his place. We don’t see Haru swim, nor do we learn the result of their medley, but there’s a possibility Rin’s vow to never again swim with Haru may have been premature.