Yura wakes up on a yacht with the rest of the C3 club, heading to an island for a friendly skirmish against Kansai’s Team Seto, led by Aoi. C3 storms the beach and claim victory in the first skirmish, with Yura notching three hits. After barbecue and various activities, she goes to bed, but has a pessimistic dream she tells herself to ignore. The next day Yura is even more aggressive, taking a leadership role and giving orders in a center flag match. They’re victorious once more, but while Yura is ebullient, Sonora looks concerned.

The C3 Club obviously can’t happen upon a shrine inhabited by a wayward spirit for Yura to assist every week, so we’re back to gunfights, only this week mixes it up with an exotic island field, and, for the second of two battles, are fighting in swimsuits. Yura’s cute little two-piece belies her newfound confidence. The first battle is reminiscent of a WWII amphibious landing, while the second battle ends with the girls striking a pose not unlike the American soldiers at Iwo Jima. This could suggest Yura is actually creating these worlds, though it remains ambiguous whether transforming her surroundings gives her advantage here or if it just adds to the excitement.

In any case, despite Yura’s great success on the trip, Sonora projects her concern with subtle facial experesions that Yura is too busy being awesome to notice. The efficacy of Yura’s metaphysical powers aside, is she simply taking all of this way too seriously? It’s understandable after two past events: letting her team down by surrendering, and having an real, if slight, impact on history last week. It’s good to celebrate a win and one’s quick growth in the sport, but one gets the feeling when (not if) she loses, she’ll be just as devastated as she is ecstatic when she wins. Living between such extremes is stressful. As the Seto leader remarks, it’s better to be of the attitude where you have fun regardless of the outcome. Victory isn’t everything.

Shimokamiyama-sensei informs Potte and Mitani of a sakura photography contest. They agree to enter and set out to snap photos, but all of the cherry trees they encounter have already shed most of their blossoms. They run into Kaoru’s sister Sayomi, who gathers everyone together for a trek up Mt. Asahi, home to a grand 250-year-old cherry tree in full bloom. Potte and Mitani snap up tons of photos, and even though Shimokamiyama got the deadline of the contest wrong, they still had fun.

Potte and Mitani Kanae may lack confidence in their photographic abilities while simultaneously revering one another. Mitani even credits Potte’s presence in her photo for winning the contest for her; she’s always been too nervous to take portraits of anyone, but something about Potte in that time and place affected Mitani so powerfully, she forgot to be shy or worry about failure and just snapped up a damn good picture.

As it turns out, there are many ways of being aggressive; perhaps no one is more aggressive than Sayomi, who wrangles everyone up for another one of her patented “death marches” that always pay off in the end. Not only does everyone end of having fun, but Mitani gets back that feeling she got when she snapped Potte; the ability to stop over-thinking everything, live in the moment, and not be afraid to document it. She’s even able to halt her tendency to delete photos that don’t come out perfectly. Part of being aggressive is not fearing failure and trusting in the world, and Mitani’s on her way. 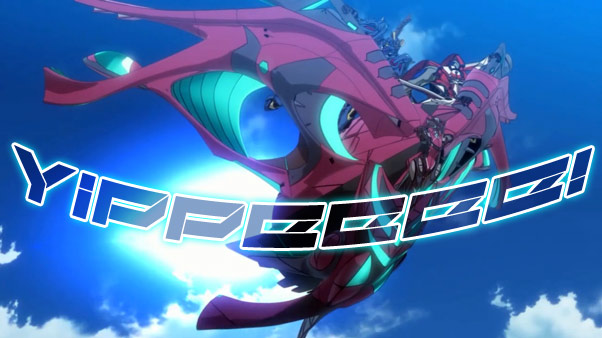 Ange is sent to assist the fleets on the front lines, but the rest of the Rabbits turn around and head to earth, where an independent Wulgaru detachment is headed, targeting the Gurantseere Academy. The detachment is led by Klein, who wants revenge for what the lumata did to him. Lumes (Rumes?) wants to join him, but is ordered to stay put. Izuru, Asagi, and Tamaki intercept them in time and stall them as Kei coordinates from orbit. Further out in space, Suruga targets a massive optical cannon at Klein, but after firing, he either misses or it is ineffective, as Klein emerges from the smoke unscathed.

Majestic Prince is nothing if not consistent –  always taking an episode off and change before the next big battle – and workmanlike in executing that battle once it comes.  This one’s the biggest so far; so big, we only get to see one half of it this week. Ange is sent to the front lines with the Dobermans, while Team Rabbits is ordered to deal with a far more imminent threat of a pissed Klein and a crafty Lumes armed with knowledge of where the humans make their elite pilots. Even snooty Price Jiart appreciates that pathetic as humans are, they’ve made a few such elites who have at least entertained him, meaning all this isn’t a complete hassle.

As for Klein, he’s still butthurt from his previous defeat by Ange, who isn’t even there for the rematch. But the Rabbits work much better as a team without that dude(ette), and while watching him/her battle among massive fleets of warring ships in space, the episode’s showpiece is the battle on earth, which starts with with Izuru and Asagi piggybacking on Tamaki’s Rose 3 as it barrels into the atmosphere. The Rabbits-on-Wulgaru skirmishing is kept fresh with the new backdrop of the blue sky and fluffy clouds. Suruga’s ultra-sniper weapon may have failed, but it looked awesome doing so.