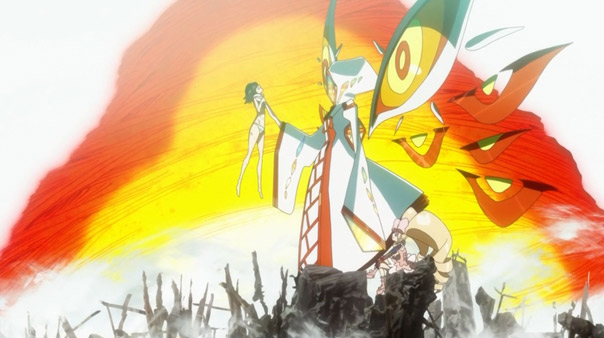 Last week we said we were sad that Kill la Kill was ending, but that didn’t mean we thought it shouldn’t end. Far from experiencing pangs of withdrawal in the aftermath, we feel perfectly satisfied and a little relieved; almost as if we’ve been through a mutual breakup. A weight is gone, but there are no regrets. The show came to its natural conclusion…which is to say it went completely nuts; one last hurrah before purging itself form our systems. 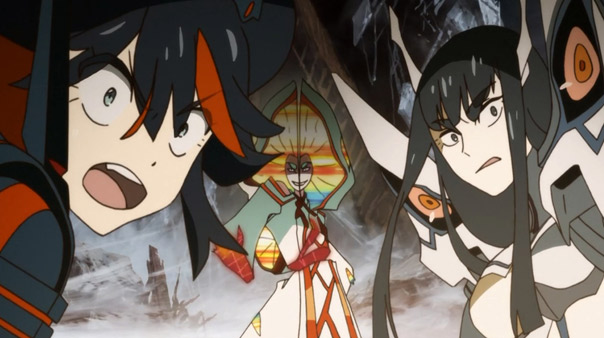 Victory ultimately goes to Ryuko, Satsuki, and all mankind, but it isn’t easily achieved. Sanageyama’s initial raid on Honnouji results in a scene suffused with fairly overt reproductive symbolism: he’s leading a charge of thousands of his underlings—lets call it a school of sperm—but Ragyo’s transmitter is protected by what amounts to a giant condom, which is ultimately busted open by…err…Gamagoori’s face cannon thing. 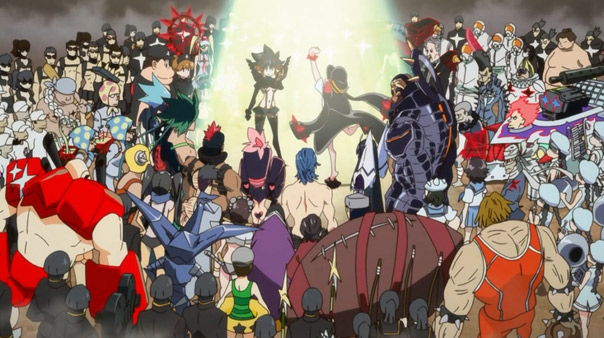 That would only be the…er…tip of the complication-berg, as Ragyo throws anything and everything at Ryuko & Co., including ordering Nui to cast her body into the revived original life fiber, creating an even more ultimate garment that Ragyo dons, allowing her to rocket into orbit to transmit the message for all the world’s Covers to start feeding. Ryuko in turn borrows the fibers from everyone elses’ uniforms to create her own ultimate rocket suit, thus leaving the entire cast buck naked. 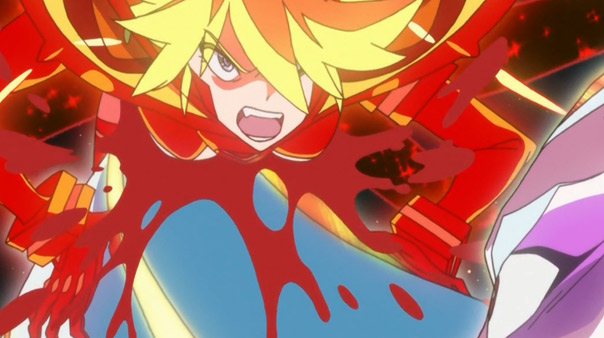 The orbital battle between Ryuko and Ragyo becomes just as much one of words than of blows exchanged (Ryuko is slashed to pieces multiple times, but quickly regenerates). In effect, Ryuko yells a lot about how she and Senketsu are neither clothing nor human, and yet both clothing and human, Ragyo calls out their lofty, highly abstract BS, but it doesn’t matter, because they use that BS to absorb her power and render her Covers around the globe inert. 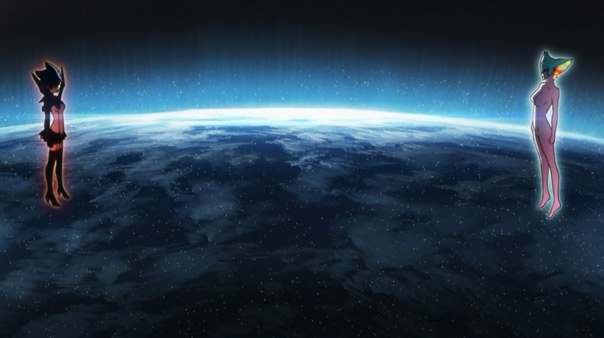 Rather than return to earth and reconcile, she tears out her own heart. With his role as a check against Ragyo’s plans completed, Senketsu burns up in the atmosphere, shielding Ryuko during re-entry. Ryuko is distraught, but once she comes down to earth, and her landing cushioned by the bosom of her sister (and virtually everyone else, all of them still naked), she immediately feels a lot better. As Senketsu eloquently puts it in his parting words, a sailor fuku such as himself is meant to be grown out of, not worn forever like a second skin. 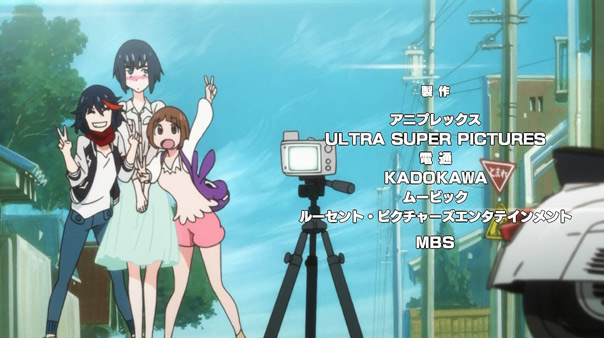 Now the threat has passed (at least until the next Life Fiber arrives on Earth), and she is free to wear what she wants, live life with her real and adoptive sisters (Satsuki and Mako, respectively). Kill la Kill took the guilty pleasure to dizzying new heights, ones we won’t likely return to for quite a while. But like the placid epilogue we see during the credits, coming back down to earth and to a state of relative normalcy isn’t so bad either.