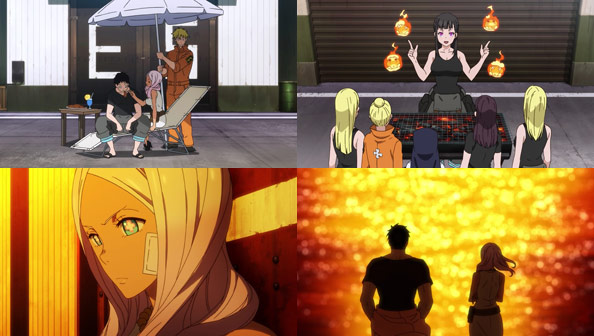 In the wake of the nighttime “joint exercise” (read: heated battle) between the 5th and 8th companies, their commanders decide to hold a “job well done” cookout in hopes of fostering peace—and keeping their superiors off their backs.

There’s no clearer evidence that the two companies have put their differences aside than Princess Hibana feeding Shinra cuts of grilled meat, but she also agrees to assist Captain Oubi and the 8th in their investigation of the scourge of spontaneous human combustions. 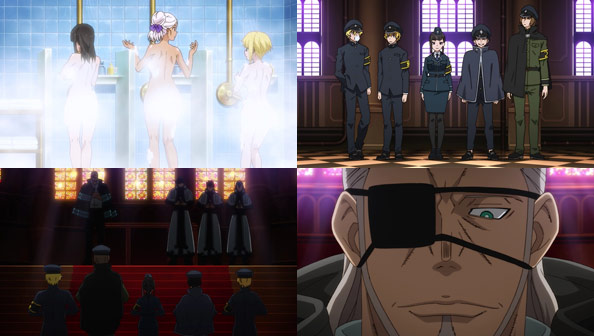 The most likely culprit is believed to be someone from the 1st company, since most of the man-made infernals come from their jurisdiction. It’s logical enough, even if it’s almost as likely to be someone not of the 1st who just happens to operating there.

In any case, Oubi wants eyes and ears on the inside, so he makes use of the above-board, inter-company trainee exchange program to send Shinra and Arthur to the 1st. They’re accompanied by first-years from the 2nd and 8th to allay suspicion that the 8th is up to something. 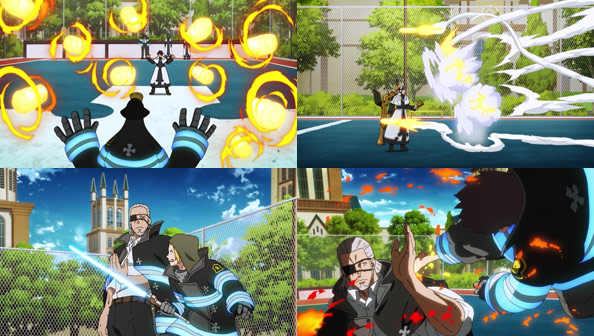 When Maki escorts the trainees to the 1st’s Captain Burns (the fire soldier at the scene when Shinra’s family was killed), Shinra immediately challenges him to sparring, with the understanding that if he can beat Burns, the good captain has to answer his questions without reservation.

But as both the 2nd Company trainee and Arthur exhibit, these 1st dudes are no joke, and challenging them to a fight so soon, even under the guise of training, doesn’t so much help their investigation as show them exactly what they’re up against in terms of strength.

One of Burns’ lieutenants, Karim, can turn flame into ice with the use of some kind of one-man-band air compressor, while Burns is able to stop and extinguish Arthur’s vaunted Excalibur with one lazily outstretched hand. 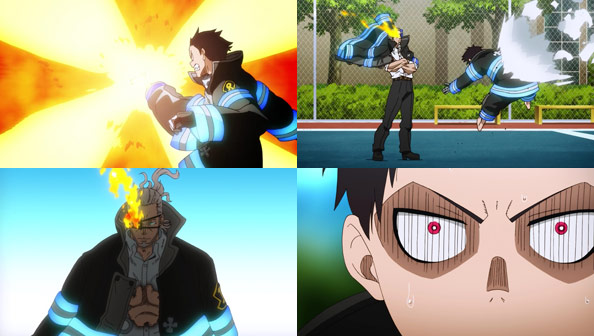 When Shinra gives Burns his best shot, it’s clear no member of the 1st is breaking a sweat today, despite Tamaki’s needless worry that Shinra might be able to hurt one of them. Once Burns dispatches Shinra, he asks him why he became a fire soldier, and suddenly Shinra’s spiel about wanting to be a hero to stop what happened to his family to happen ever again, Burns simply replies that Shinra has a long way to go to achieving that goal.

Still, perhaps being among such scarily powerful fire soldiers will help Shinra learn a thing or two, even as he and Arthur investigate the possibility one of them is creating Infernals. One 1st soldier I’m reasonably certain is innocent in all this is Tamaki, whose main special skill seems to be accidentally tripping and falling on men…her superiors have even adopted a habit of catching her in mid-air.